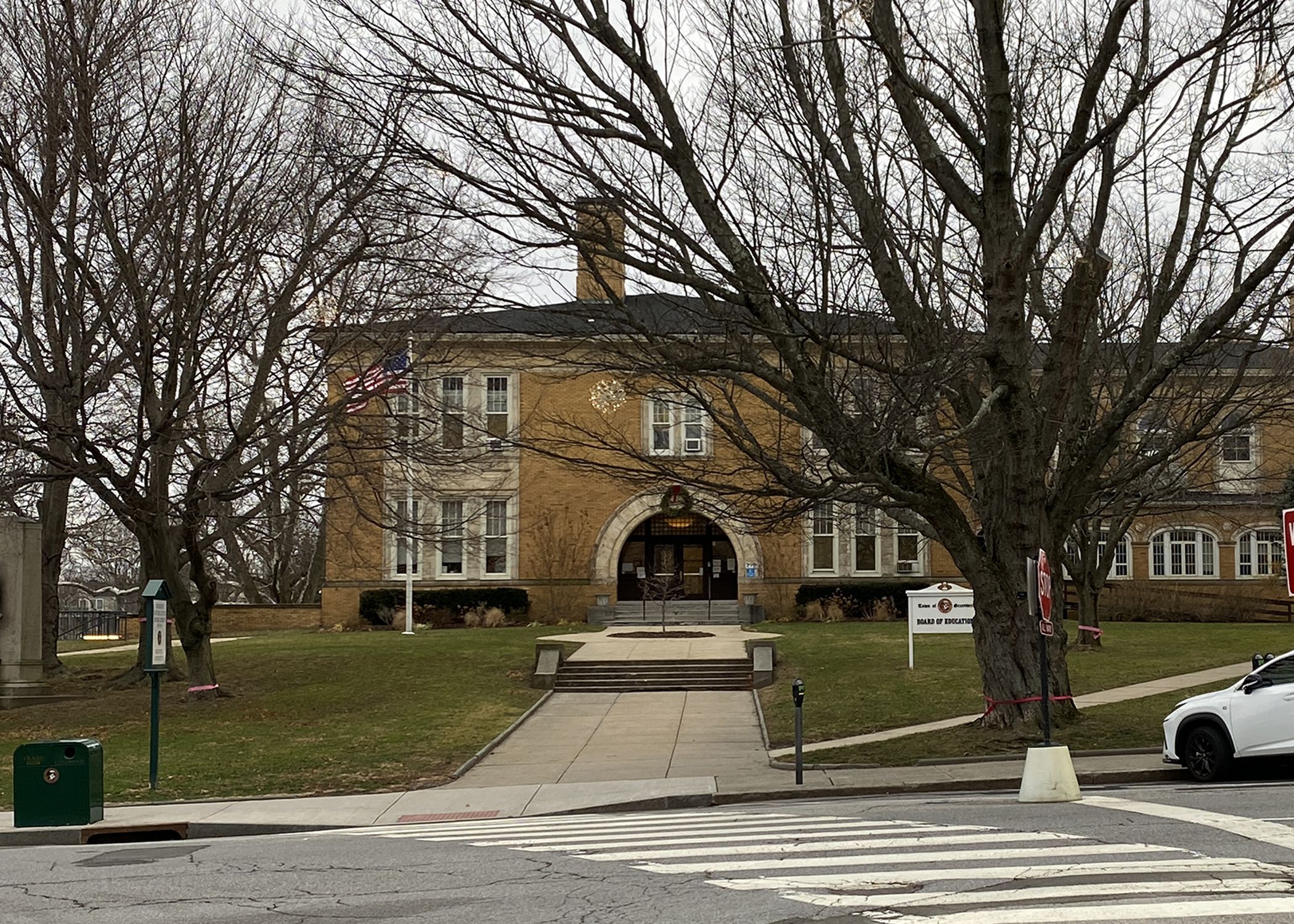 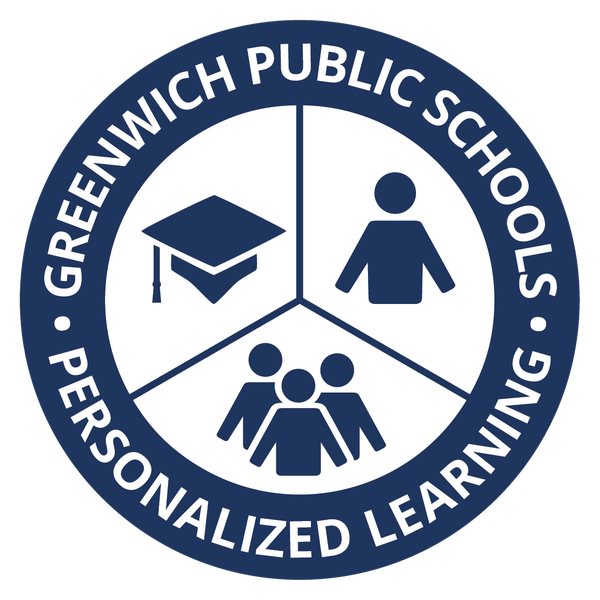 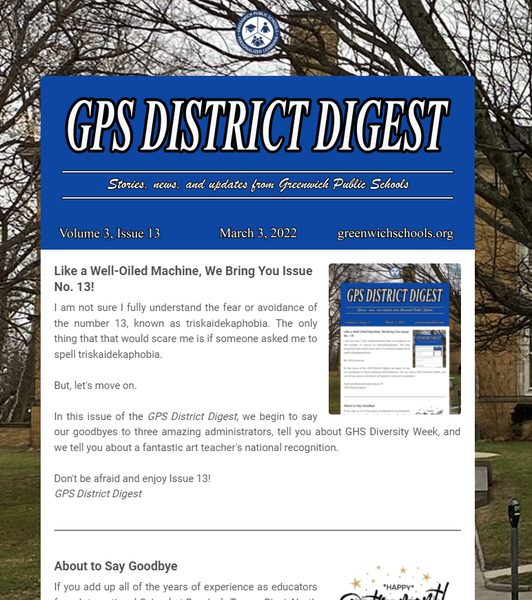 Like a Well-Oiled Machine, We Bring You Issue No. 13!

In this issue of the GPS District Digest, we begin to say our goodbyes to three amazing administrators, tell you about GHS Diversity Week, and we tell you about a fantastic art teacher's national recognition.

Don't be afraid and enjoy Issue 13! 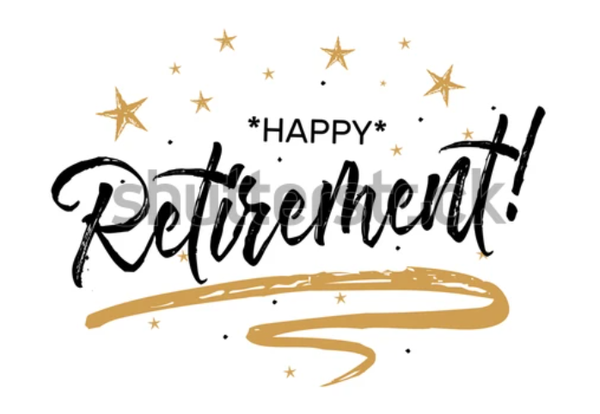 About to Say Goodbye

If you add up all of the years of experience as educators from International School at Dundee’s Teresa Ricci, North Mianus’ Angela Schmidt, and Cos Cob’s Gene Schmidt, you will realize that GPS will lose a combine 133 years of expertise, knowledge, and wisdom.

Last week, all three announced that they will be retiring at the end of the school year. We are incredibly grateful for their service and all that they have done during their long tenures at Greenwich Public Schools.

"Please join me in congratulating all three exceptional and inspiring leaders of our school community and extend a great deal of gratitude for their outstanding service through the years," Superintendent Dr. Toni Jones said. "Although Terry, Angela, and Gene are looking forward to the next chapters of their lives, they will be greatly missed at GPS."

Principal Teresa Ricci has been the principal at ISD since 2003 after originally joining GPS in 1979. Her career has spanned 43 years as a K-5, preschool, special education, and summer school programs teacher, a district trainer of the Project Read program, and an administrator. Her career in administration began as an assistant principal at Old Greenwich, before accepting the same position at newly formed ISD in 2000 as a key member of the planning and opening team of the first magnet school in the District.

Principal Angela Schmidt has been the principal at North Mianus since 2009 after originally joining GPS in 2000. She began her GPS journey as a teacher and International Baccalaureate trainer at ISD, and then assistant principal of Hamilton Avenue, New Lebanon, and ISD. During her tenure at North Mianus, the school was chosen as a pilot for Personalized Learning and she led the effort that led to the school being recognized as a National Blue Ribbon School in 2019.

Principal Gene Schmidt has been the principal at Cos Cob since 2013 after originally joining GPS in 2000, first as a teacher at the newly opened ISD where he was recognized as a Distinguished Teacher in 2005, and then as an assistant principal at ISD and Julian Curtiss. During his distinguished tenure in education, he was also named Teacher of the Year in his district in Florida, and earned a Fulbright exchange to teach in England.

Gene and Angela’s amazing educational careers have each spanned over 45 years across the globe together, making stops in Arkansas, Florida, England, and Italy before making their home in Greenwich. 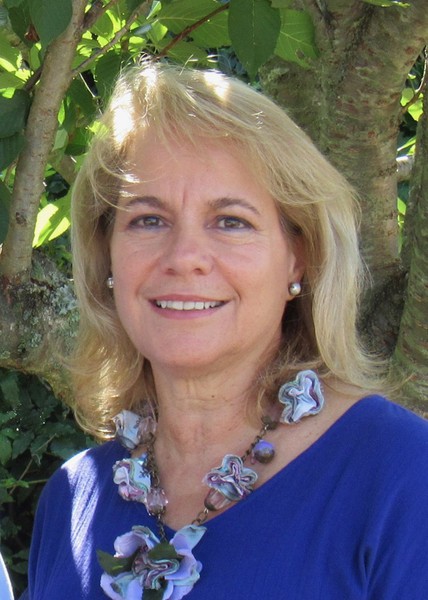 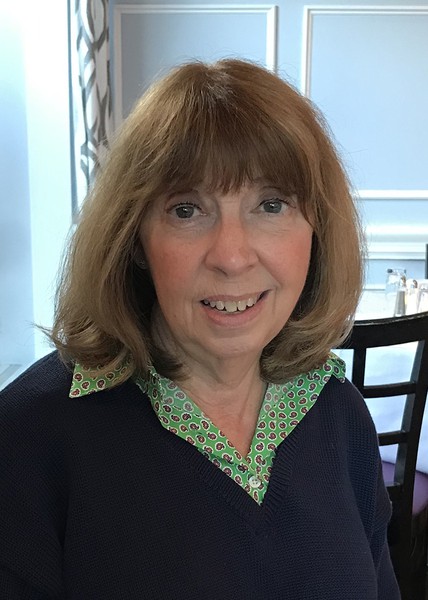 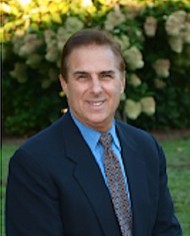 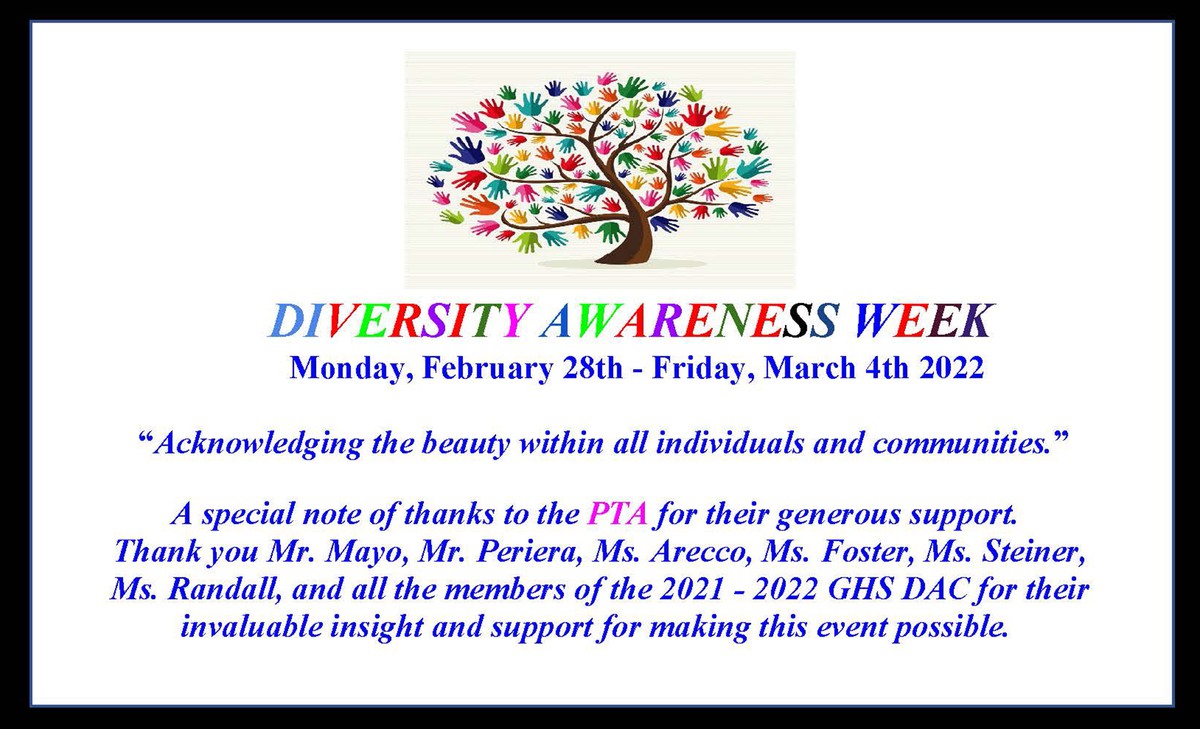 Greenwich High School is finishing up its extremely successful "Diversity Awareness Week" for students that included a host of amazing events, guest speakers, and panel discussions. The week was created to acknowledge the "beauty within all individuals and communities.”

"Quoting best-selling author Adam Grant, '[t]o get real diversity of thought, you need to find the people who genuinely hold different views and invite them into the conversation.' Grant’s statement highlights the need for our school to supporting conversations that reflect different viewpoints," Dr. Garfield Charles, assistant dean of Bella House and Diversity Awareness Club advisor, said. "This perspective has guided our focus for this year’s Diversity Awareness Week, and further enables us to support our District’s goal to prepare students to function effectively in an interdependent global community with a core body of knowledge and the individual capacities defined in the Vision of the Graduate."

Students and staff were asked during Diversity Awareness Week, and every week, to remember to honor the GHS Diversity Pledge: “We, the students and staff of Greenwich High School, promise to build a community that promotes mutual respect. We will celebrate our differences and not let them divide us. We will work to understand, educate, and listen to each other.” 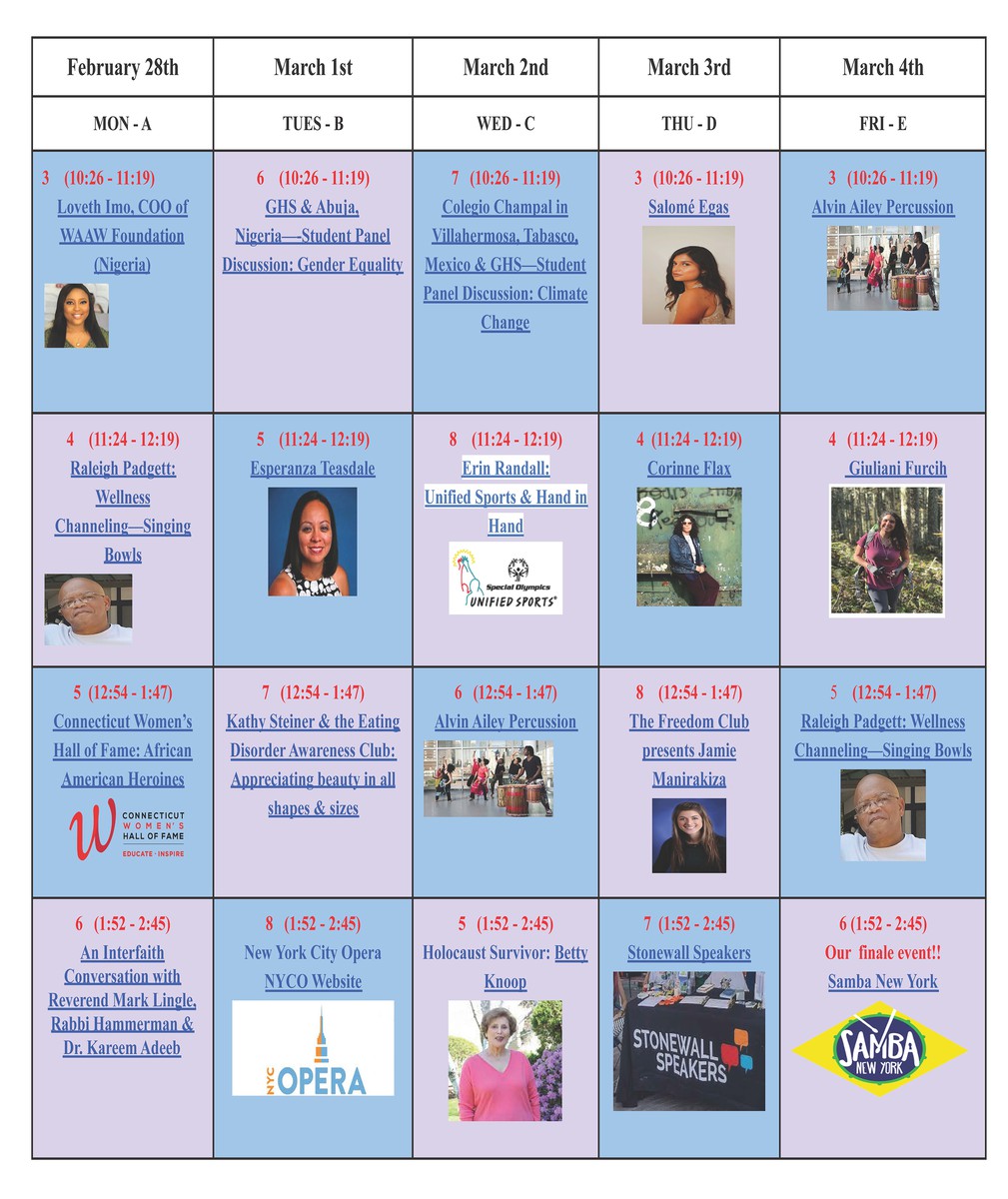 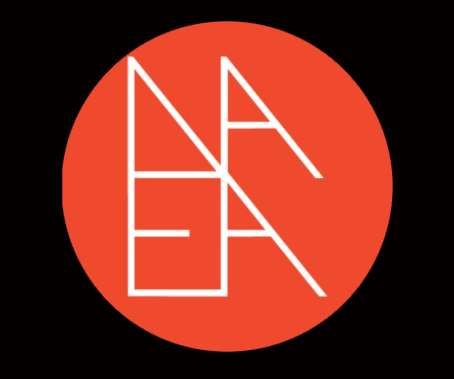 Le Ann With the Plan

The National Art Education Association has named Western Middle School's Le Ann Hinkle, to receive the 2022 Eastern Region Middle Level Art Educator. This prestigious award, determined through a peer review of nominations, recognizes the exemplary contributions, service, and achievements of an outstanding NAEA member annually at the Regional level within their division. The award was presented during the NAEA 2022 National Convention in New York.

"This award is being given to recognize excellence in professional accomplishment and service by a dedicated art educator," NAEA President James Haywood Rolling, Jr. said. "Le Ann Hinkle exemplifies the highly qualified art educators active in education today: leaders, teachers, students, scholars, and advocates who give their best to their students and the profession." 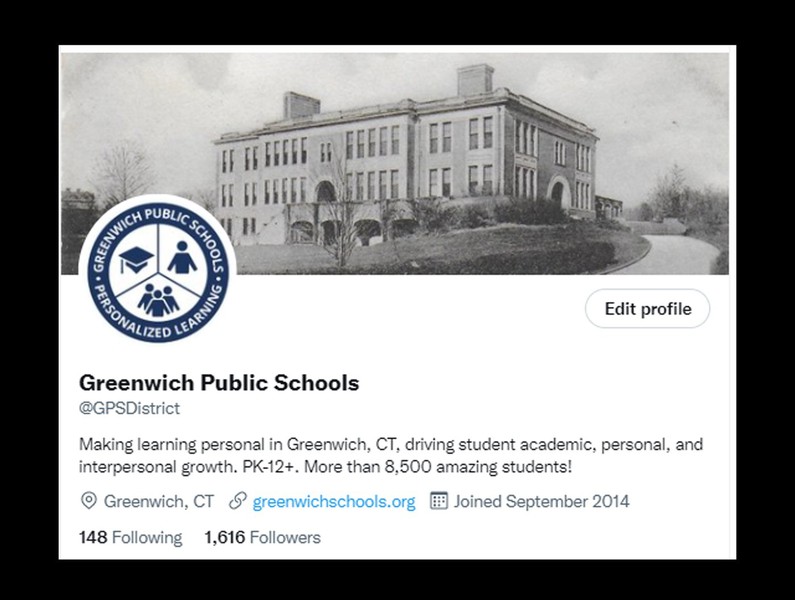 Around the GPS Twitterverse

Click on the images below to see what our administrators and others have been sharing on social media!

Are you following @GPSDistrict or your favorite school? 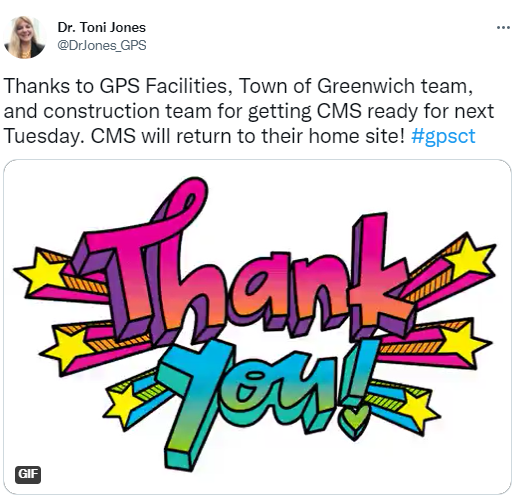 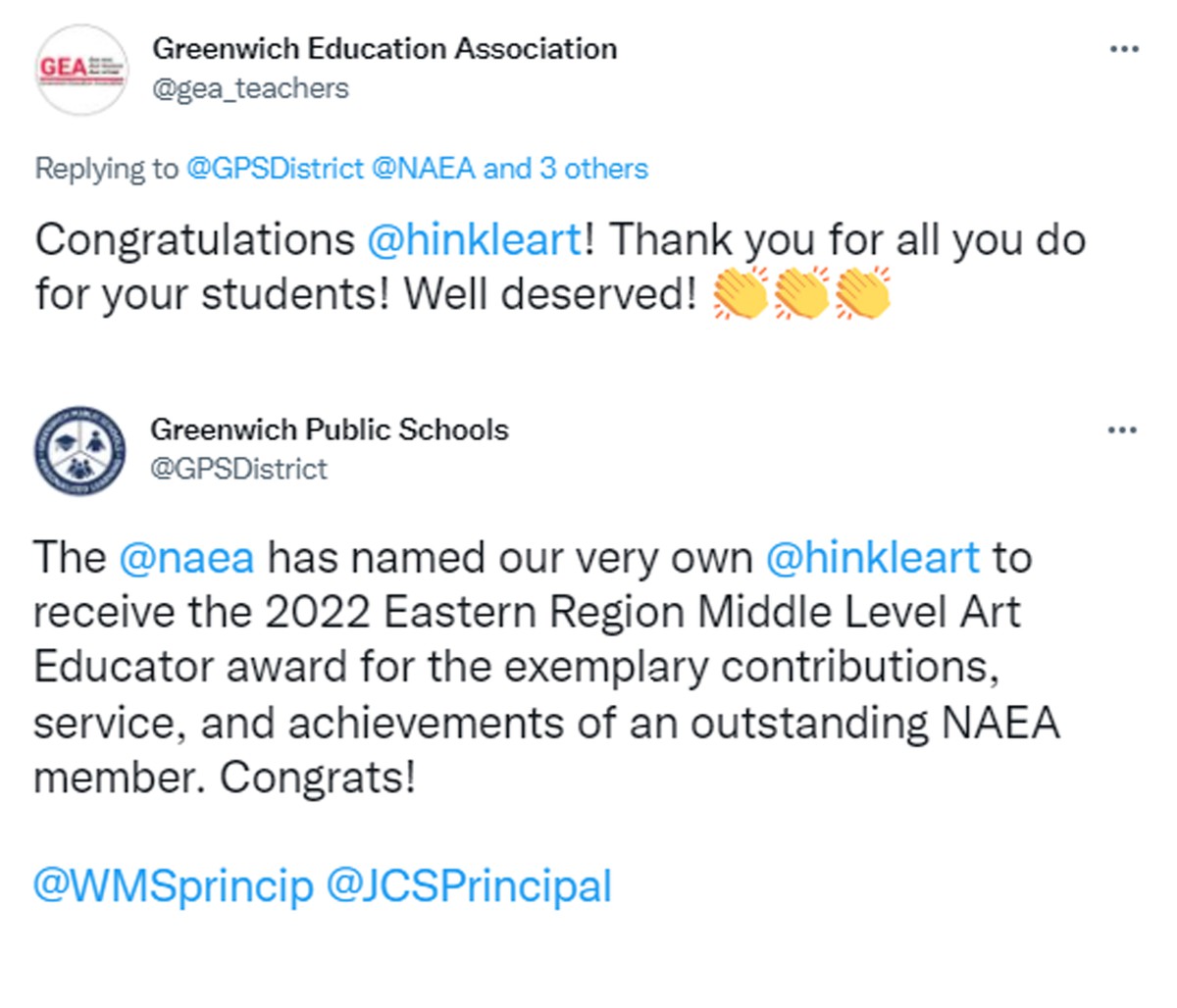 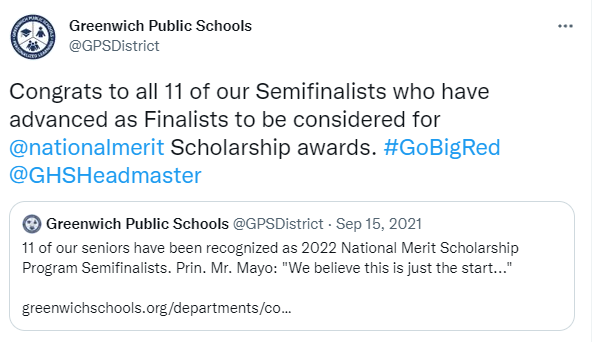 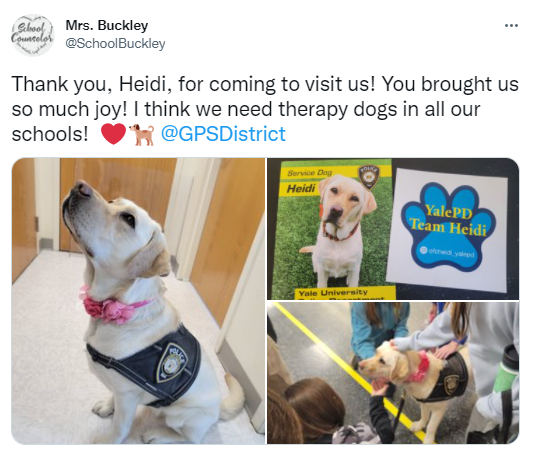 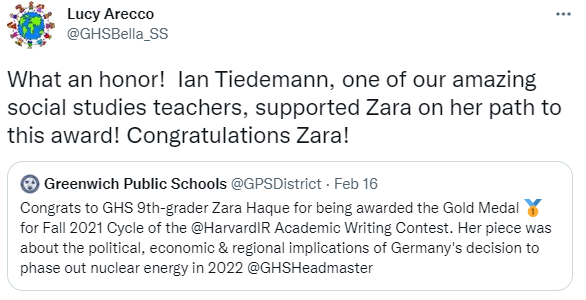 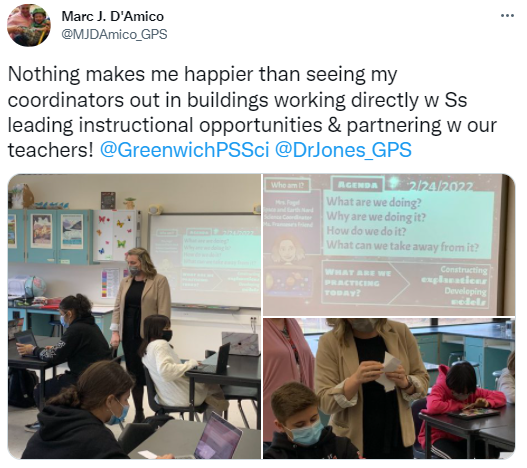 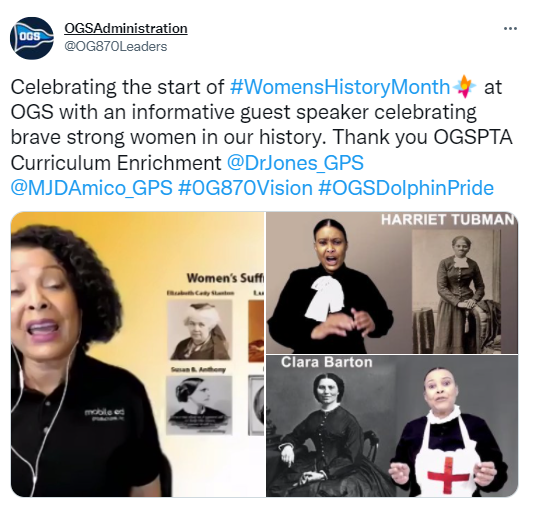 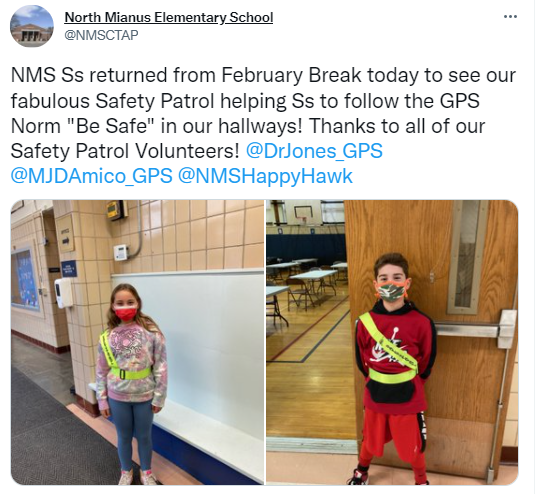 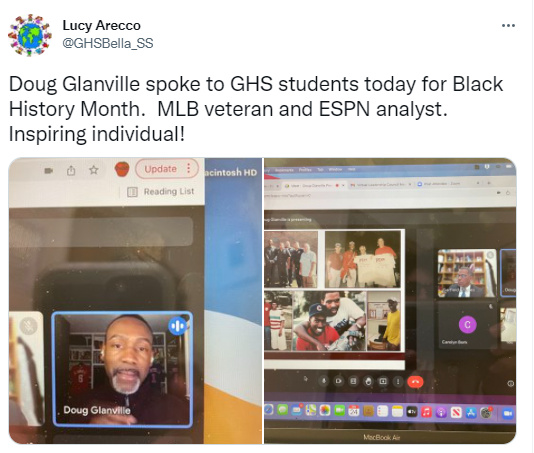 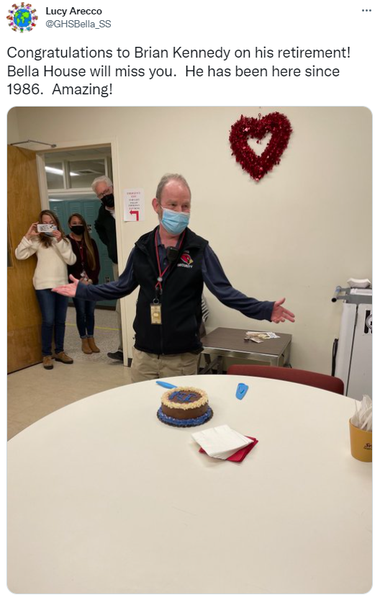 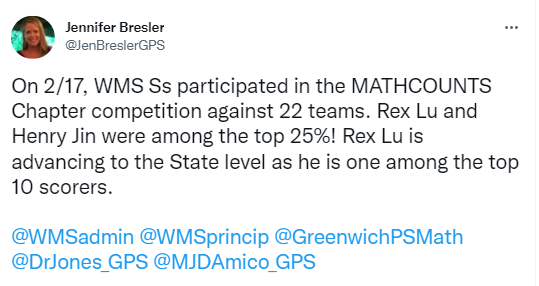 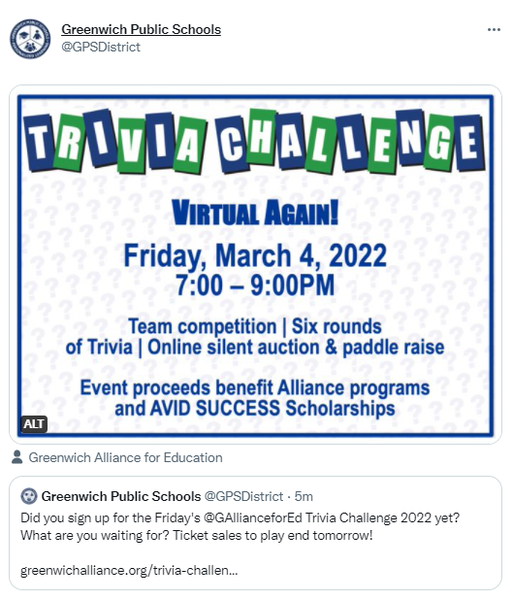 Greenwich Public Schools on YouTube
Did you miss a Board of Education meeting, virtual town hall, or a presentation? Or maybe you would like to watch it again? Subscribe to our YouTube channel now! 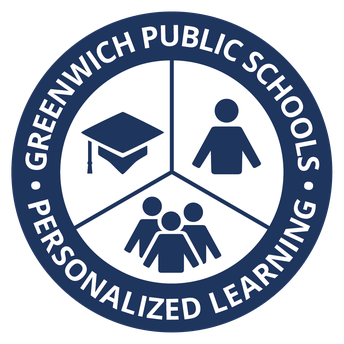 If you have a great story or photograph to share from our schools inside the District, let us know the details.

Want your own subscription? It's easy to sign up.

Did you miss an issue? Go to our archive to catch up.