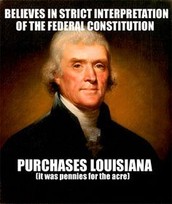 Thomas Jefferson in the right corner he throws the first punch and knocks him out with closing all ports to the British so the British would stop kid napping our people.Thomas Jefferson beat John Adams in a fight where we couldn't sail foreign ports just like Washington.

he helped doubled the size of our U.S nation but did not spend much money because he brought it for cheap.my bets are on Thomas Jefferson because he did not believe in the alien and sedition act he because if there are no aliens there will not be much fighting for trespassing to america.Thomas Jefferson would not let British ships on our ports if they they tried to come he would knock them out of the ring.