The major habitat for Kemp’s Ridley Sea turtles is in the Gulf of Mexico. Specifically, the northern Gulf of Mexico in Louisiana waters. Sometimes they get swept out of the Gulf and move into the Atlantic Ocean, but generally after two years they return to neritic zones of the Gulf of Mexico where they continue to grow until they reach maturity. They prefer to live in shallow waters so they can dive to the bottom to reach crabs and other shellfish.

The Kemp’s Ridley sea turtles are some of the smallest sea turtles, only reaching about 2 feet and weighs about 100 pounds. It is usually olive-gray in color and has a triangular shaped head with a hooked beak. 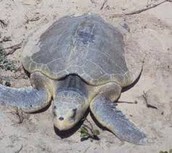 One of the biggest threats to the Kemp’s Ridley are human activities, like the collection of eggs, or the killing of adults for their meat, and for other purposes. A large number of their nests were destroyed because of shrimp trawlers. Another big reason for their decline is because of the over harvesting of their eggs. Now, their nests are protected but it has been hard for the species to come back. Wildlife trade, pollution, and climate change are also responsible for the current status of the Kemp’s Ridley sea turtle.

The endangerment is a mass extinction because such a large number of the sea turtles have gone extinct in a short period of time. Also, they are not disappearing because they cannot adapt, or because they are slowly dying off, they are disappearing at a large rate because humans are taking their eggs and killing them, which is not natural. This species is endemic because it is only found in the Atlantic Ocean and the Gulf of Mexico. This could accelerate the chances of extinction because only a small part of the world has these sea turtles, and they are being killed off at an alarmingly fast rate. Extinction for these species could come very close considering they are already critically extinct in parts of the world, but if they continue to decrease at this rate in North America they could come very close to extinction.

Many people have made various efforts to slow down the extinction of the sea turtles. In 1966 conservation efforts were made for beaches in Mexico. In 1978 the United states paired with Mexico to help stop the extinction of Kemp’s Ridley sea turtles. Today there are 7 camps protecting nesting sites of the turtles. The Mexico government prohibits harvesting, and they fence in nest areas to prevent against natural predators.

The WWF is one of the main organizations that have done the most to protect the Kemp’s Ridley sea turtles. The WWF is taking action to address the impacts of climate change, monitoring the turtles’ migration patterns, improving trade controls, protecting nesting sites, and reducing bycatch and promoting smart fishing. Rehabilitate beaches and protect nesting sites. Also, the laws should be stricter with harsher punishments. 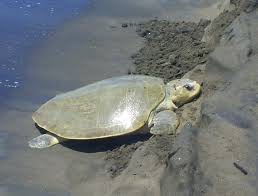