Get email updates from Tony:

Save the Sea Turtle, Skip the Straw

With the help of Pomptonian Food Services, Weehawken is proud to help launch the “Save the Sea Turtle, Skip the Straw” campaign at the high school. This campaign will educate students about the importance of conservation and how they can help save endangered species.

Sea Turtles migrate through New Jersey during the summer months to enjoy our warm waters. Plastic pollution is a major problem in our oceans for these animals. A simple way for students to get involved with helping these animals is for them to skip using plastic straws in their drinks. 500 million plastic straws are used each day in the United States. These short lived tools are usually dropped into the garbage with no further thought and instantly become a source of plastic ingestion and pollution which is very destructive to our oceans.

Only 1 in 10,000 sea turtles make it to adulthood. All sea turtles are either threatened or endangered. Four species that can be found in New Jersey during the summer months are:

Atlantic Leatherbacks - massive creatives weighing as much as a car

We will launch the campaign during the last week of May and the first week of June. During the first week of June, the high school will not have plastic straws readily available. Plastic straws will be provided upon request only. We will also post information about sea turtles around the cafeteria. Our mission is to raise awareness about these amazing, endangered animals and empower students to make a difference.

WHS students have always been able to participate in a fair number of spring sports -- baseball, softball, track and field, and tennis, to name a few. This year, however, our slate of sports offered in the spring has expanded to include lacrosse, fencing, and boys' volleyball.

Safa Abdou's Financial Literacy & Careers classes have a "Real World" final project n the works, where students from all grades will showcase key learning from both courses to present what their lives will look like in the future. They are using project-based learning to build their resumes, educational and career requirements, real-world budgets, banking needs, housing, cars, calculating loans, and other expenses. Students will present their projects at the end of the year.

WHS students were honored to host Maud Dahme, a holocaust survivor, who spoke to students for an hour in the auditorium. While the lecture was originally intended for juniors and seniors, there was so much interest that most of the student body attended.

Ms. Dahme’s journey started in Amersfoort, Holland where she was born in the 1930’s. By 1942, the Nazi’s occupied Holland and sent letters to all the Jewish families, including Ms. Dahme’s family, ordering them to appear at a railroad station with one suitcase. The family was separated and forced into hiding for their lives until the middle of 1945.

In 1950, the surviving members of the family left Europe to move to New Jersey. Maud became a force in education — holding a variety of local and state posts and speaking to High School students around the country. Maud is a passionate advocate of Holocaust education and was featured in a PBS documentary and at the Holocaust Museum in Washington DC. Her family continues to grow across generations.

Approximately 50 schools were represented at the Colllege Fair hosted by Weehawken High School on March 29. Such schools as Rutgers, Quinnipiac, Stevens, and the University of Delaware, as well as the military academies, all sent representatives to provide students with information about their universities and to answer any questions they might have. In the photo below, students visit various tables for each of the colleges. The Fair was organized by Supervisor of Guidance Jenna Wendolowski and counselor Melissa Vierra-Bodtmann. 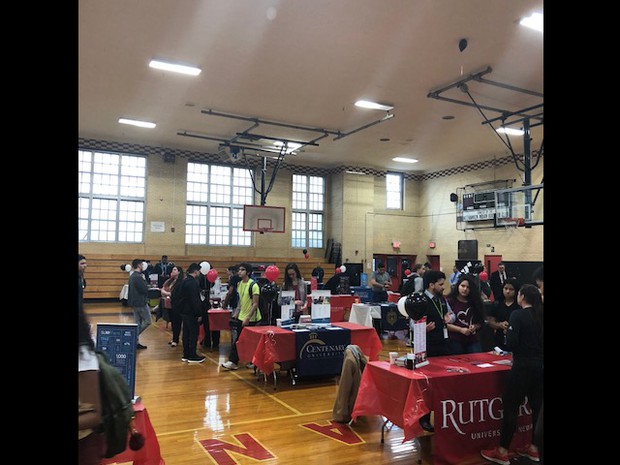 Mr. Panepinto, Mr. Perry, and Ms. Parkinson have organized a voter registration drive in correlation with the #MyVoiceMyVoteNJ initiative. The teachers felt that this would be a great opportunity for civic engagement in view of all the debate generated by the Parkland shooting.

#MyVoiceMyVoteNJ is encouraging schools to hold voter registration drives for students 17 years old and up, in the hopes that they become more involved in their communities.

We have two committed guest speakers for Friday, May 4: Mayor Richard F. Turner and Hudson County Elections Clerk Michael Harper for an assembly school in the auditorium for students 17 and older who are American citizens and have not yet registered to vote. Mayor Turner will speak first at 10:30 AM followed by Mr. Harper.

After they both speak, the teachers will help students register to vote. Mr. Panepinto will hand deliver all voter registration forms to Mr. Harper, who is a personal friend for quick expedition.

Hosted by Weehawken Athletics, three games of softball were played this past weekend and six games of baseball will be played on April 28 and 29 to raise money for autism. Donation jars will be placed at the concession stand, and T-shirts supporting the event will also be on sale. Each of the teams participating have also pledged to raise funds to support this worthy cause. 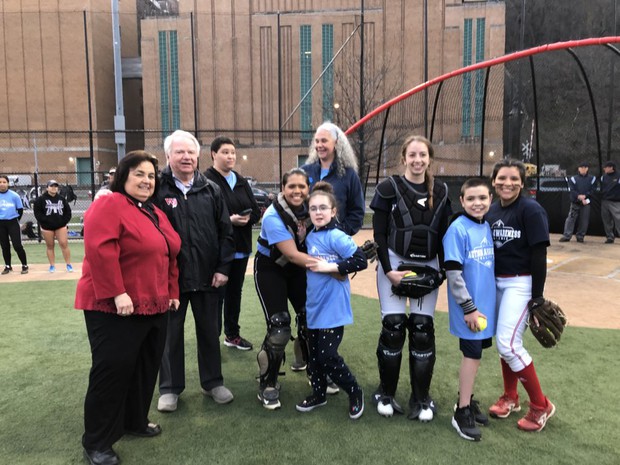 Come enjoy the spring play on May 4 and 5!
Get Directions