The Lost Colony Of Roanoke

The Lost Colony Of Roanoke

That question cannot be easily answered.

There are many theories out there but not a lot of conclusive evidence to prove any correct (Cooke, 1998).

England wanted to establish an english colony. They tried two times and failed both, the second attempt ended in a mysterious disappearance (Cooke, 1998).

When the settlers setteled into their new colony, after a couple of months they ran out of supplies. So, their governer, John White, went back to england to get more supplies. He got stuck in England because the Anglo-Spanish-War broke out and the queen demanded they use all their ship to fight spain leaving John was stuck in England for three years until the war was over. When he returned to Roanoke, there was nothing there. No one, nothing, not one sign of debris other the single word 'Croatoan' marked into a tree ("Roanoke Colony," 2016). The Croatoans were the name of an indian tribe just 50 miles south of thier colony. Many believe, as well as I do, that the colonists of Roanoke were attacked by the Croatoans then the colonists escaped to Chesapeke bay that was later destroyed in 1606 (Cooke, 1998). 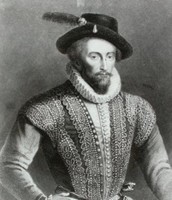 This is Sir John W., he was the one who traveled back to england to get more supplies.

This is a picture of some of Johns investigators after he returned and found nothing but the word Croatoan.

This is a picture of the Anglo-Spanish-War broke out when John went to England.

What do you think happened?

There are many theories out there but only some are resonable. Such as: diseases, drought, they colonists traveled to Croatoan 50 miles south, the Croatoans attacked the colonists, or a different american tribe captured them. Which proves my statement above saying that many thoeries have been put out there but not one has been proven correct.