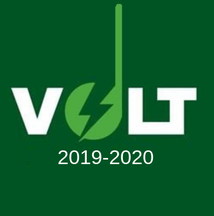 Tuesday, Wednesday, and Fridays during Megalunch, 12:15 - 1:05 pm. Working on Take on Me for Fall Concert, Don't Worry Be Happy/Winter Wonderland and Where Are You Christmas for the Winter Concert. 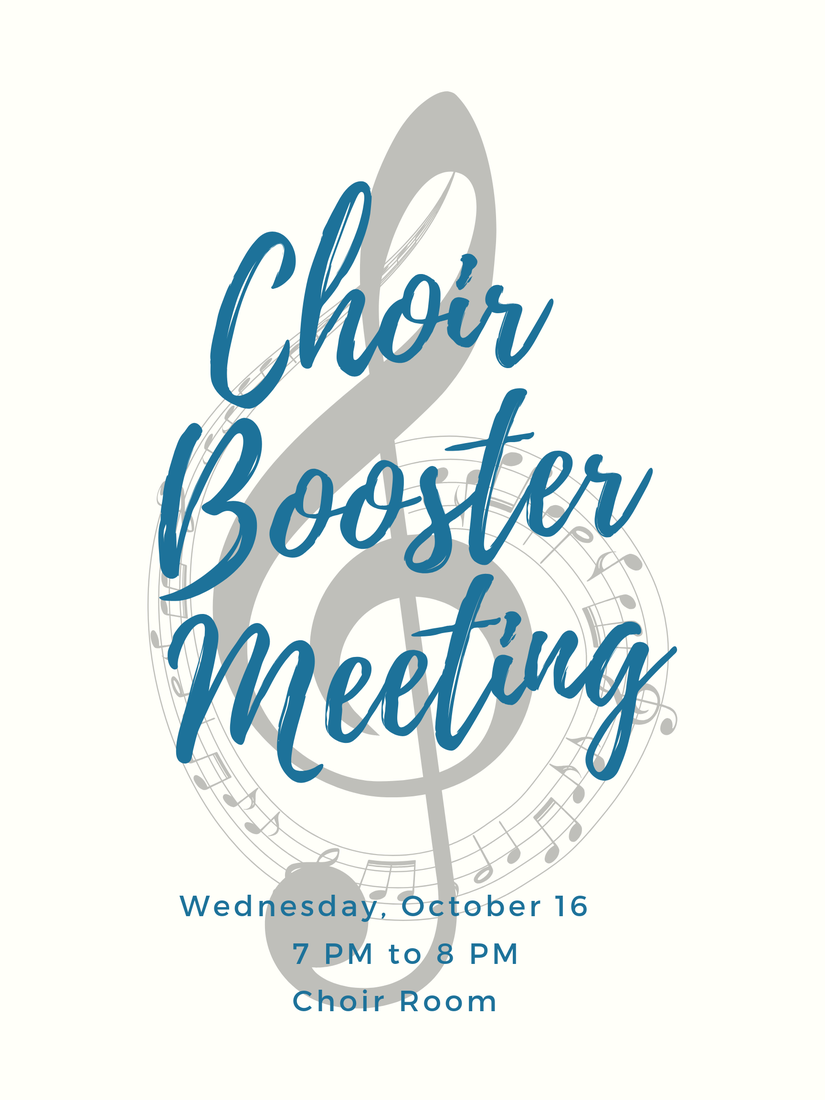 Working on Fall and Winter Events and Poinsettia fundraiser. We need parents that will be willing to help with our Booster fundraisers.
Get Directions 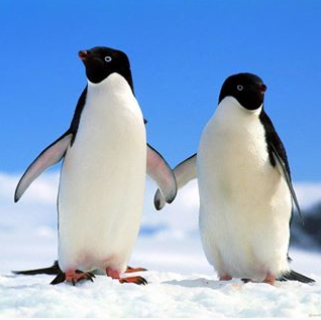 The uniforms will be worn at most concerts and all competitions. If a student is out of

uniform at a performance, he/she will not be allowed to sing and a performance grade of “zero” will be assigned. If a student needs another size uniform, it is their responsibility to notify the director at least one week in advance of a performance. We will not address uniform issues the day of the concert. 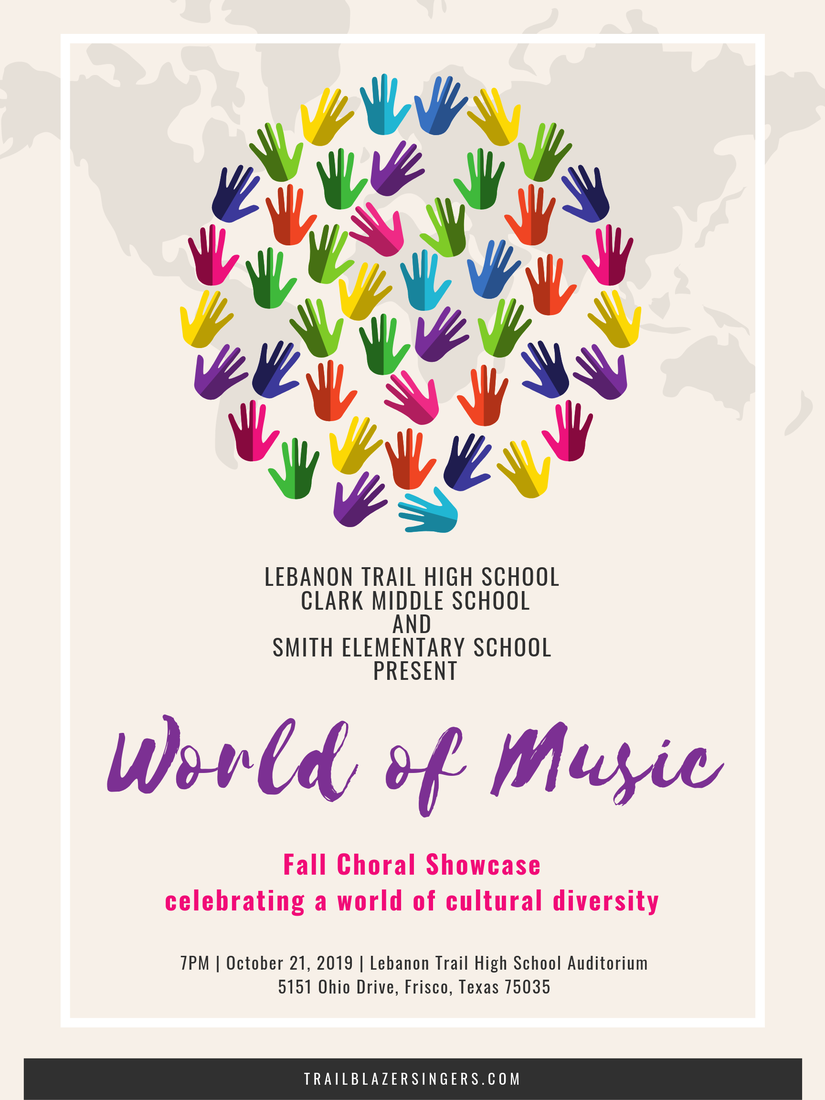 LTHS - Rehearse on stage during the day with accompanist 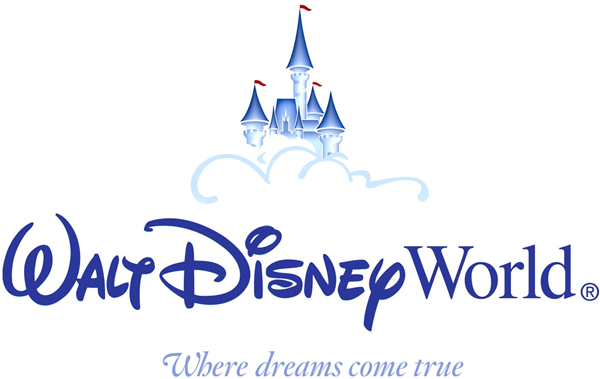 Online School Fees or check or cash given to Holly Sherman in the LTHS Front Office. 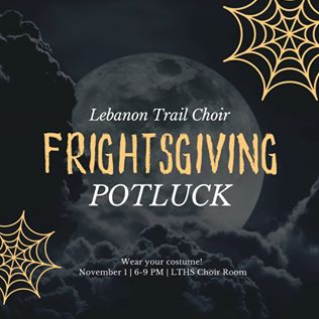 Bring your favorite dish! Wear your costume!
Get Directions

Would you like to see Dear Evan Hansen with your friends? If you are in Chorale or Theatre Productions you can pay on the online store starting today. This needs to happen now as the tickets will sell out fast. We will take a bus from LTHS to and from the Music Hall. Please sign and return the permission form.

Evan Hansen is a teenager with social anxiety. His therapist recommends that he write letters to himself detailing what will be good about each day. His mother, Heidi, suggests that he make new friends in senior year at high school by asking people to sign the cast on his arm.

Meanwhile, in the wealthy Murphy family — Cynthia, Larry, and their children Zoe and Connor — Zoe and Larry berate Connor for getting high before school, while Cynthia struggles with the fact that her family is falling apart. The two mothers wonder how to connect with their sons ("Anybody Have a Map?").

At school, Evan meets Alana, a precocious but somewhat self-absorbed classmate, and Jared, his only (family) friend. Both Alana and Jared notice his broken arm, but neither signs his cast. Evan then runs into Connor, who interprets Evan's awkwardness as making fun of him, resulting in Connor's pushing Evan to the ground. Connor's sister Zoe, whom Evan has a crush on, feels obligated to apologize for her brother's behavior. Evan wonders if this is his destiny — to be ignored and an outcast — for the rest of his life ("Waving Through a Window").

Evan writes a letter to himself, wondering whether anyone would notice if he were not there. All his hope is focused on Zoe, since his crush on her is the only thing that brings him happiness ("Waving Through a Window" (Reprise #1)). He encounters Connor again, who now offers to sign Evan's cast. Connor finds Evan's letter on the printer and reads it; he becomes furious at the mention of Zoe, thinking Evan intended for him to see the letter in order to make fun of him. He storms out, taking the letter with him.

Evan is in an intense state of anxiety over what Connor might have done with the letter, and tells Jared online about his assignment to write letters to himself. Evan is called to the principal's office and is told by Connor's parents that Connor died by suicide days before, with Evan's letter found in his pocket, which they believe is a suicide note addressed to him.

Evan goes to Connor's house for dinner. Jared had instructed him to "nod and confirm" to avoid making things worse, but Evan is awkward and uncomfortable and he lies, pretending he and Connor had been best friends, emailing each other from a secret account. The Murphys don't question this because Mr. Murphy had been monitoring Connor's real account. Zoe and Cynthia get into an argument, and Evan jumps in, recounting a fictional version of the day he broke his arm at an abandoned apple orchard the Murphys had visited ("For Forever"). When Evan gets home, Heidi mentions hearing about Connor's death, but Evan tells her not to worry and that he didn't know Connor. After realizing he needs evidence of his supposed "secret email account", Evan enlists Jared's help in creating fake, backdated email conversations between himself and Connor ("Sincerely, Me").

After Evan shows the Murphy family Connor's "emails", Cynthia is ecstatic that her son had a friend, but Larry is hurt that Connor took his family and his privileged life for granted. Cynthia tries to show Zoe the emails, but they argue again. Zoe still refuses to mourn Connor ("Requiem"). Despite this, after reading the "suicide note", Zoe notices that she is mentioned and asks Evan why Connor would say that about her. Evan, unable to tell her the truth, tells her all the reasons he loves her under the guise of Connor saying them ("If I Could Tell Her"). Overcome with emotion, he impulsively kisses Zoe, but she pulls away and tells him to leave.

At school, Evan and Alana notice that people are starting to forget about Connor, so Evan enlists Alana and Jared's help in founding "The Connor Project" to keep Connor's memory alive. The three pitch the idea to the Murphys, who agree to support the project ("Disappear"). Moved by his dedication, Cynthia gives Evan a necktie she had gotten for Connor that he had never worn and asks Evan to wear it when he speaks at Connor's memorial service. At the official launch of The Connor Project, Evan gives an inspiring speech about his loneliness and friendship with Connor, which goes viral. Zoe, overcome by the impact her brother and Evan have had, kisses him ("You Will Be Found").

Evan and Alana pitch a fundraising idea on The Connor Project's website, to raise $50,000 to reopen the abandoned apple orchard where Evan and Connor ‘supposedly’ spent time. However, Evan becomes preoccupied with his new relationship with Zoe and his newfound family in the Murphys, and begins to neglect his mother, Jared, and The Connor Project ("Sincerely, Me" (Reprise)).

Heidi asks Evan why he did not tell her about The Connor Project or about his friendship with Connor. He angrily responds that he did not have the time because she is never around. Overcome with emotion, he rushes off to the Murphys, where Evan bonds with Larry Murphy and confides in him about his childhood. Larry offers him an old baseball glove of Connor's that was never used. ("To Break in a Glove"). Later, when Evan begins to mention Connor, Zoe tells him that she does not want their relationship to be about Connor, but about the two of them ("Only Us").

Evan goes to the Murphys, only to discover they invited Heidi for dinner. She is mortified to learn they want to give Evan Connor's college fund. At home, Heidi and Evan fight over his secrecy and deception, with Evan confessing that he feels welcomed and accepted into the Murphy family because of Heidi's absence. Meanwhile, Alana begins to find inconsistencies in the fake emails. Evan asks Jared to help fix the inaccuracies, but Jared refuses and threatens to expose Evan, who counters that he could expose Jared's role. Heidi, Alana, and Jared converge in Evan's conscience, compounding his guilt and doubt over his decisions ("Good for You").

Evan decides he has to confess to what he has done. Imaginary Connor attempts to talk him out of it, but Evan shouts that he needs the whole thing to be over. Connor tells him that if he tells the truth, all he has will be gone, and the only thing he will be left with is himself ("For Forever" (Reprise)). He disappears, leaving Evan alone.

Evan apologizes to Alana, but she has given up on Evan's help with The Connor Project as she doubts the truth of his statements that he was Connor's best friend. Evan shows her the letter to himself that he wrote when he was giving up on having a good year, claiming it to be Connor's suicide note. Realizing that the letter is the key to fulfilling the fundraising goal, Alana posts it online where, to Evan's chagrin, it goes viral. As a result, many people begin to believe Connor's suicide was because of his uncaring, wealthy parents ("You Will Be Found" (Reprise)).

The Murphys have become the targets of hateful comments because people believe they were responsible for Connor's death. Evan, distraught, walks in on the Murphys fighting about why Connor really killed himself. Evan admits his fabrication, hopeful that he could forge a genuine bond with the Murphys out of the tragedy. As Zoe and her mother tearfully leave, Larry turns away from Evan in disgust. Alone once more, Evan absorbs his perceived brokenness as inescapable ("Words Fail").

Heidi saw the letter online and knew that it was one of Evan's therapy assignments. She apologizes to Evan for not seeing how badly he had been hurting, though Evan denies her guilt due to his deception. He vaguely admits that his fall from the tree was a suicide attempt. Heidi recalls the day that his father moved out and did not know how she was going to make it by herself. In the end, she realized that she was not alone – she had Evan and knew that the two of them could survive anything so long as they were together. Tearfully, Heidi promises that she will always be there for him when he needs her ("So Big/So Small").

A year later, Evan is still living at home and working at Pottery Barn to earn enough money to go to college the next semester. He contacts Zoe, whom he has not seen since she found out the truth, and asks her to meet him. She insists that they meet at the orchard that has been reopened in Connor's memory. He apologizes for the pain he caused by manipulating her family and admits that he has been reading Connor's ten favorite books in an attempt to connect with who he really was. He thanks her and her parents for keeping his secret and reveals that they never told anyone else that his friendship with Connor was a lie. She forgives him, saying the ordeal brought her family closer together because "everyone needed it for something." Evan asks her why she insisted on meeting at the orchard, and she replies that she wanted to be sure he saw it, and the two share a gentle moment before they part. Evan mentally writes himself one last letter reflecting on the impact he has had on his community and finally accepts himself ("Finale").

Text 81010 at add the handle to the message to join the group: