Arthur Miller was born in Harlem, New York on October 17, 1915. In 1929, Arthur Miller and his family lost most of their things in a Wall Street Crash. They had to fire their chauffeur and move to Gravesend, Brooklyn. After Miller's graduation, he attended the University of Michigan. In college, Miller wrote an essay, No Villain, which later on became his first play. After Miller received his degree from the University of Michigan, he joined the Federal Theater Project in New York City. Miller wrote many plays. He wrote: The Crucible, Death of a Salesman, All of my sons, A view from the Bridge, and The Prince. In 1944 Miller's first Broadway play, The Man who had all the luck, opened, and his play, All of my sons, received the Drama Critics Circle Awards. In 1953, Arthur Miller wrote a play called The Crucible. The play focuses on the Salem Witch Trials which happened from 1692 to 1693 in Massachusetts. It's a drama play and somewhat fiction. Throughout his life, Miller married three times, engaged in his work and wrote with compassion. He died on February 10, 2005. 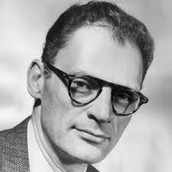