Cornelius Vanderbilt was born in Staten Island in 1794 to Cornelius van Derbilt and Phebe Hand. He began working on his father's ferry in New York Harbor as a small boy, quitting school at age 11. Then at age 16 Vanderbilt started his own ferry service.

Vanderbilt lived to be 82 when he died in 1877 from prolonged suffering of chronic disorders. He had a net worth of about 1.5 billion dollars in today's money which put him in 2nd place for the wealthiest person in history. He was also inducted into the North American railway Hall of Fame. He donated 1 million dollars to the construction of Vanderbilt University. He distributed his willed money throughout his children in which they created some of the most beautiful houses in the nation. Lastly, his construction of the Grand Central station is one of the most significant land marks in railroad and American history. 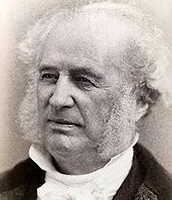 Vanderbilt in his later life 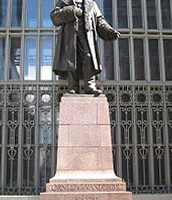 One of Vanderbilt's steam boats