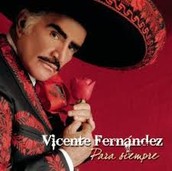 Vicente "chente" Fernandez Gomez is a mexican singer,actor,and film producer. his nicknamed as El Rey de la Cancion Ranchera.For over 40 years, Vicente Fernandez has maintained his position as the greatest living singer of mexico.Recording more than 50 albums and contributing to more than 30 films. 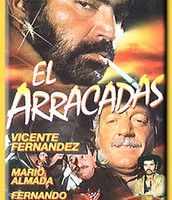 one of his movies

Born on February 17, 1940, in Huentitan el Alto, Jalisco, Mexico, Fernandez spent the early years of his life on his father Ramon’s ranch on the outskirts of Guadalajara. Here the idyllic ranchera lifestyle was instilled in him. His mother often took him to see the films of Pedro Infante, the king of Mexican bolero. Fernandez told Leila Cobo of Billboard the significance of these films: “When I was 6 or 7, 1 would go see Pedro Infante’s movies, and I would tell my mother, ‘When I grow up, I’ll be like them.’” By age eight he had taken up the guitar and was practicing his singing in the style of the ranchera singers he heard on the radio. 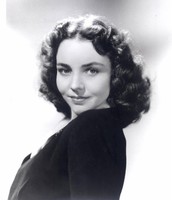 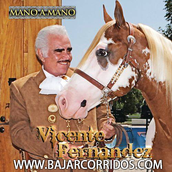 Fernandez's work has earned him two Grammy Awards, eight Latin Grammy Awards, fourteen Lo Nuestro Awards and a star on the Hollywood Walk Of Fame. He has sold over 50 million copies worldwide. He has an estimated net worth of $25 million
Las Mañanitas- Vicente Fernandez
By the end of the 1980s, Fernández had been famous more than 22 years, yet he had never earned a major award and was beginning to think he would have to die before he was recognized. His patience was rewarded in 1990 when he released the album Vicente Fernandez y las clasicas de José Alfredo Jiménez, a tribute to Mexico's most famous songwriter José Alfredo Jiménez. The album earned him Billboard and Univision's Latin Music Award for Mexican Regional Male Artist of the Year, which he won 5 times from 1989 to 1993.
30 peliculas de Vicente Fernandez