Get email updates from Alexa:

A high school senior in Bethel, Washington was disciplined by the school system after giving an unacceptable speech which included sexual references. The school suspended him for three days and removed his right to a graduation speech. His parents thought that the first amendment should protect his right to freedom of speech and appealed the decision. 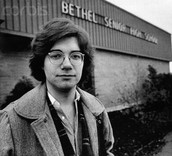 The Supreme Court re-examined the issue of student expression in schools and the limits of the first amendment.