This will be our last edition until the January session. In January, Mrs. Doole will be running Newsletter on Mondays and Wednesdays. Be on the lookout for sign-ups!

Where in the Wang?

Somewhere in the school the subject of this picture lies. Find it first and win a prize.

Congratulations HUNTER CAHILL! The picture of the eagle is located near the art room. Mrs. Doole will run down the school store gift certificate to your homeroom.

If you have a memory you want to share, send it to Aiyana or Mrs. Doole

I'll update this each week so we can keep a running log of our 8th grade year. Click below and check it out. 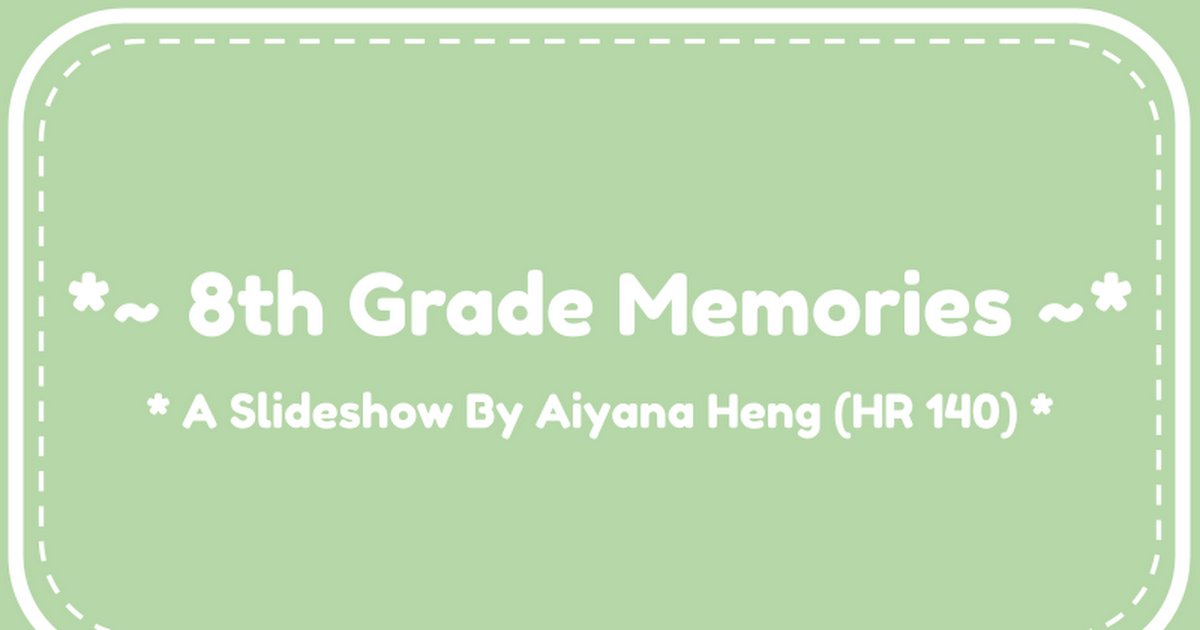 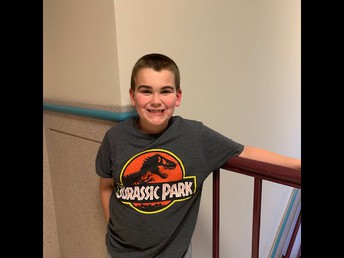 Hi I'm Aliyah Hang and I'm gonna be interviewing 6th graders to see how they are doing in 6th grade and to see if they like it there. Now when I go to see my old teacher Ms Colon Some kids be complaining about all the work there and stuff. Now I'm thinking how 6th graders feel right now. Scared, happy, sad , mad, embarrassed. Maybe all you never know, Well when I was in 6th grade I felt scared and all because I never been in the school. I don't know how people will treat me but I'm sure some people feel different about this but that's ok you know. I'm gonna be interviewing some 6th graders for a couple of weeks. Well, if I can , I will interview 7th graders next week and ask them how their life in the Wang school has been and how they feel about 7th grade and the people there. Well i guess that's all i can say about why i'm interviewing 6th graders right now have a good day people <3 -Aliyah Hang

2.How was your experience in this school?- Good

3.What's your most favorite thing to do- Playing at recess

4.What did you do at Thanksgiving that you liked the best- Hang out with my Grandma and Grandpa, well do what every other kid did.

5.What is the most hardest thing about 6th grade- Differently the math

6.How do you feel about being a 6th grader- I mean good because that means i'm getting older

7.Knowing your older now How does it feel to not be the youngest in the school?- well you know it feels good and bad. It's good because I'm getting older, I'm more mature. It's bad because I miss 5th grade.

8.Would you rather eat watermelon all week or strawberries?- I'm gonna have to go with watermelon.

9.Favorite person ever?- I'm gonna have to go with my friend Kaylin.

10.If you could meet someone famous who would it be?- I have to go with Bruno Mars 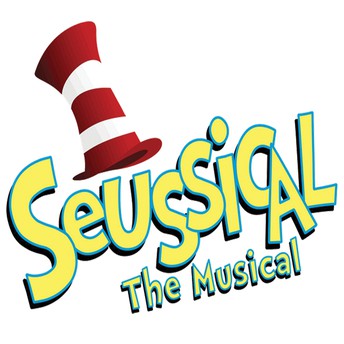 What is the play going to be about?

Seussical the Musical incorporates a lot of Dr. Seuss book characters but mainly focuses on the story of "Horton Hears a Who." The Cat in the Hat is our narrator and helps JoJo's navigate his thinks.

When do you think the play will be finished, when will it premiere?

The play is premiering March 10th at 6PM. We'll have another show on March 11th and then school shows the week after!

Who is the main character?

We have a few main characters. The Cat in the Hat played by Vivian Soares, JoJo played by Kathleen, and Horton played by Ryan Morin.

What are some of the challenges that you’ve faced while putting the play together?

Similar to last year, illness makes it difficult to have all of the actors together every rehearsal.

What’s the best part of doing the play?

Seeing students achieve their goals of dancing/singing/acting. They take my vision and make it happen!

Are there any changes from the original play?

We are doing the "Junior" version, which means it's a little shorter than the original.

What type of genre does the play focus on?

The music is mainly pop/rock.

Is there a lesson to the play?

The lesson in Seussical is that it's ok to be yourself and stand up for what you believe in, even if others doubt you. And to use your imagination, be creative, and HAVE FUN! 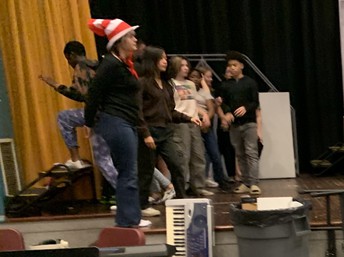 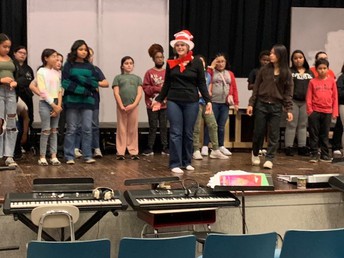 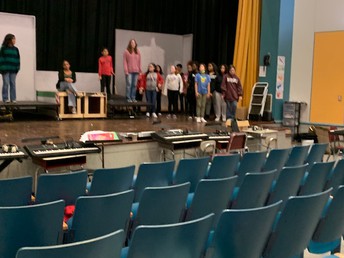 Ms. Williams wants to share how the library is doing at our school. She wants to let us know that our library has had ALL of our new book orders put on the shelves this week! She is going to work on putting our older books on the shelves too, and in our new library check out system we will be using.

We will be having a Library Grand Reopening in January when we return from our break!

Look at the last order, our school added 1,000 new book titles this week! 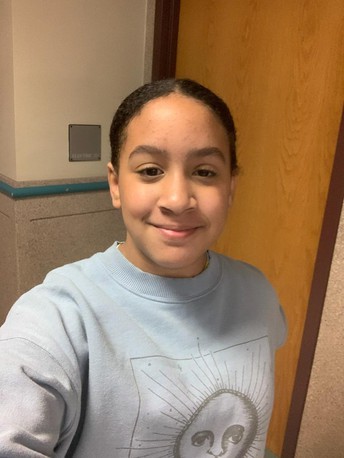 What grade are you in?

Favorite after school club or sport?

Do you have any hobbies? If so, what?

I do drama but that's really it

I don’t really have one

ELA or Math, Which is better in your opinion?

I don’t have one because I can never decide

Are you a night owl or a morning lion?

Would you rather be early for an event, or late?

I like to be early but I’m always late

Finally, what do you think came first, the chicken or the egg?

The egg because I googled it.

Do you prefer cold or hot weather? 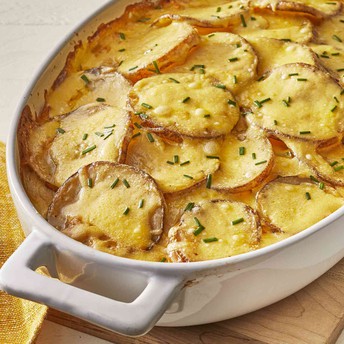 How To Make Rich And Creamy Potatoes Au Gratin Step By Step:

Step 2:Place Potatoes,Garlic,And Salt Into A Large Pot.Fill With Enough Water To Cover.Bring To A Boil;Reduce Heat To Medium And Simmer Potatoes Until Tender But Not Mushy,8 To 10 Minutes.Use A Slotted Spoon To Transfer About Half Of The Potatoes Into A 9x13-Inch Baking Dish.

Step 4:Bake In The Preheated OvenUntil Cheese Is Golden Brown On Top,About 1 Hour. 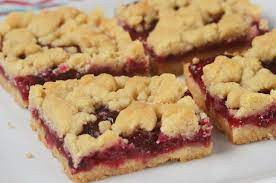 Step 1:In A Saucepan Over Medium Heat,Combine The Cranberries,White Sugar,And Water.Cook,Stirring Occasionally Until All Of The Cranberries Have Popped,And The Mixture Is Thick,About 15 Minutes.Remove From Heat,And Set Aside To Cool.

Step 3:In A Large Bowl,Mix Together The Cake Mix,Melted Butter,And Eggs.Stir In The Oats,Brown Sugar, Ginger,And Cinnamon.Set Aside About 1 ½ Cups Of The Mixture,And Spread The Rest Into The Bottom Of A 9x13-Inch Baking Dish.Pack Down To Form A Solid Crust,Getting It As Even As Possible.Spread The Cooled Cranberry Mixture Over The Crust.Pinch Off Pieces Of The Remaining Mixture And Place Evenly Over The Cranberry Layer.

Step 4:Bake For 35 To 40 Minutes In The Preheated Oven,Until The Top Is Lightly Browned.Cool In The Pan For About 40 Minutes Before Slicing Into Bars. 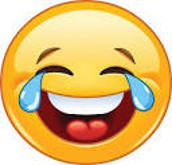 Jokes of the Week

Did you hear about the guy who made the knock-knock joke?

He won the no-bell prize

I visited my friend at his new house. He told me to make myself at home.

So I threw him out. I hate having visitors.

What has 13 hearts but no other organs?

A deck of cards 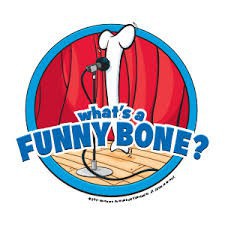 The funny bone isn’t an actual bone. The "funny bone" got its nickname because of that funny feeling you get after you hit it. 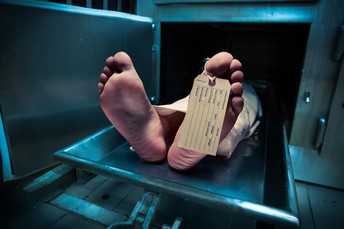 Follow Rebecca Doole
Contact Rebecca Doole
Embed code is for website/blog and not email. To embed your newsletter in a Mass Notification System, click HERE to see how or reach out to support@smore.com
close