Alexander Graham Bell was born in Edinburgh Scotland on the 3 March,1847.

Bell worked at a school for deaf children . His mother and wife were both deaf.

He was working on improving the telegraph which was lines and dashes that made communications that could be sent a long way when he came up with the idea of inventing the telephone.

In 1876 he was widely credited with the invention of the first practical telephone .

Bell would have loved to see how well phones have improved over the years . 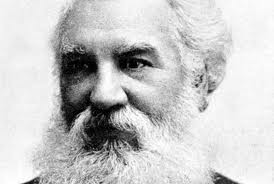