Abi is using Smore newsletters to spread the word online.

Get email updates from Abi:

faboulous facts about one hell of a man.

faboulous facts about one hell of a man.

Alan Turing formally known as a British pioneering computer sciencetist , biological mathematician and a marathon and ultra long distance runner. Born on the 23rd of june 1912 and formally stuided at King's collage,Camridge and later on went to Cambridge university

Alan Turing may be known best for his work at Bletchley Park during World War II, and his part in breaking the German Enigma code. Yet by this time Turing was already well known as a mathematician. As a young man, his idea of a 'Universal Machine', a hypothetical type of computer, resolved one of the most important problems in 20th century mathematics.The 'Decision Problem', or 'Entscheidungsproblem' in the original German, was initially expressed in 1900.

David herbert, a well known mathmaticion that sets hard complex problems was looking for men that could solve his problems, however was continiously disappointed that no one could get passed the second question. In them, Hilbert asked whether we could find a set of 'basic truths' (or 'axioms') from which we could prove all statements in mathematics, without giving any contradictory answers such as 1=0. Hilbert also asked whether there was an algorithm that could determine if a statement was true or false, even if no proof or disproof was known. In other words, Hilbert was asking whether mathematics was 'complete', 'consistent' and 'decidable'.

The first two questions were answered in 1930 by Kurt Gödel who discovered that it was impossible for any set of axioms in arithmetic to be both complete and consistent. This was a major blow for Hilbert's dream. However, the third question, that of whether mathematics was decidable, was still open and would remain so for another six years. So it was, in the Spring of 1935, a young Masters student at King's College, Cambridge, decided to take on the remaining question of decidability. (ie: Alan Turning) 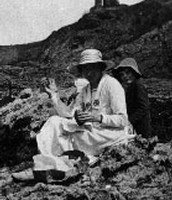 Abi is using Smore newsletters to spread the word online.