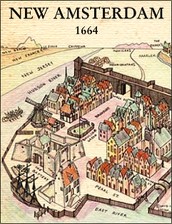 You'll never have too little land in New York due to the small population. You'll also benefit from the huge fur trade with the natives.You'll also have a variety of industries including shipbuilding, iron works, cattle farms, wheat and indigo mills. These are only some of the good reasons you should come to N.Y.

N.Y.s climate is great for farming. With its fertile soil and its warm climate it's the ideal spot for farmers around the world. The Hudson River Valley is a great water source and travel route. The summers were humid and the winters were harsh. The land was swampy towards the Hudson River and up north were the mountains.

The first founder of New York

The Duke of York. New York was named after him.

Governor of New Amsterdam. Stuyvesant plaza was named after him

We have a great Government

The colony of New York was originally an experiment of the Dutch West India Company. They called it New Amsterdam. The English took over in 1664 and it was re-named New York after James II, Duke of York.

The colony of New York was a colony of religious freedom and there was no one religion. With the Puritans to the north in New England and the Catholics to the south in Maryland, New York decided to take on the religion of the Dutch and English to be Protestants.