Get email updates from Shamara: 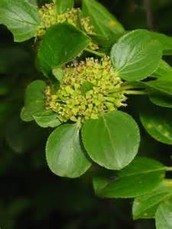 Definition: Harmful alien organisms whose introduction or spread threatens the environment, the economy or society. It has been moved from its native area and placed into a new habitat and reproduces so aggressively that it displaces species within native plant communities.

Identifying Characteristics: It grows in dry areas, flowers on it have two to six small yellowish-to-green petals. It produces clusters of berry-like black fruit in late summer and fall. Black fruits grow in dense clusters, often grows 2 to 3 metres and can reach up to 6 metres, twigs and in sharp thorn, dark green shiny leaves that are egg-shaped, have curved veins in their leaves.

Last Seen: This species is native to Europe. The habitat includes road edges, clays, well-dried sand and can grow both in drought and shade-tolerant areas.

First Offence: The Common Buckthorn first came to Canada in the 1700s, firstly to Nova Scotia and to Saskatchewan and then became widespread.

Known Accomplices: One of the known accomplice are birds. The birds eat the fruit from the Common Buckthorn and they pooped out the seeds which makes it become widespread.

Crimes Committed: This organism causes terrestrial damage. It cause light-availability for native plants, prevents natural regeneration of native trees and shrubs. It can also be allelopathic.