Ariel who started a program to help those that affected by the storm . She was very successful in doing this. Many people were recovered after help from her program and, many are trying to get back on their feet . Matt who helped people during the storm. Saving a elder woman while also putting himself in danger. Then going back and saving the woman's dogs. Matt is also (even though it was a year ago) still not back in his house. Plus DeMonte who cared for 6 toddlers as the storm had already took its toll. Promising his mother , who had to let him go that he would take care of all six .Each and every toddler looking up to him as their leader. Then eventually being seen and rescued from the side of a street. Soon being reunited with his mother. All of theses stories are very much alike because they were are heroes in some type of way .Ariel helped people recover. Matt putting his life in danger to rescue those around him. Lastly DeMonte taking on the big role to care for six other minors. Also they are all different because in everyone became a hero in a different way. Even though Ariel wasn't at he home during the storm she still helped out after. Matt wasn't creating a program ,but he still saved lives. DeMonte not taking care of strangers but of loved ones. 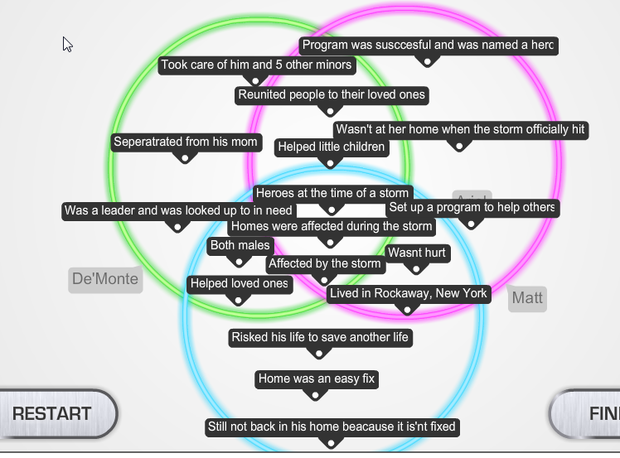 DeMonte the hero of the six toddlers.

Matt Corigan who helped the elder.