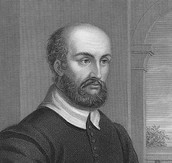 Andrea was born on November 30, 1508 in Padua Italy. He spent most of his life in Italy. He was apprenticed for six years to a stonecutter. Three years later be broke it off and moved to Vicenza, where he was enrolled in the guild of mason and stonecutters. His first opportunity came in 1538 when he was working as a stone carver on reconstructing the Villa Cricoli. A humanist Giangiorgio Trissino recognized his ability and took him in and gave him an education. Trissino gave Andrea his humanist name Palladio because is original name was Andrea di Pietro dalla Gondola. Palladio refers to wisdom of the Greek goddess Pallas Athene.

Andrea's first independent design was the Villa Godi (1538-1542) at Lonedo. It show's very little ancient architecture which is surprising because that is what he studied and that is what Trissino taught him. On the other hand the Villa Godi does express his mature style. The significant part of this piece is that it has abstract quality with the maturity piece blended in so it was a different technique that no architect used. This piece shows humanism because that is what Palladio learned and this piece is in favor of humans and Trissino. Trissino was a humanist so obviously that is what he tought Andrea to believe in. The piece is very interesting because Andrea doesn't show all of his technique's in this piece. She actually shows something that he does not use and that is amazing because most people wouldn't know how to handle something that haven't tried before but Palladio did.