Dhruv is using Smore newsletters to spread the word online.

Get email updates from Dhruv:

Quadratic formulas are used to calculate the height of falling rocks, kicked balls or an arched bridge. The formula is always y=ax^2+bx+c with a = 0. b and c can be 0. 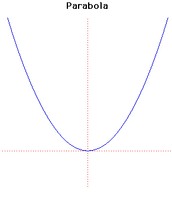 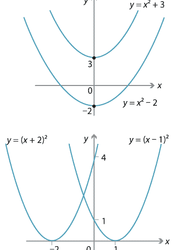 when you take a Parabola and move it, it is called Transformations of Parabola. You can move the Parabola vertically or horizontally. Suppose your parabola is y=x^2-2 and you want to make it y=x^2+5. This is moving it vertically up 5 units. If you have an equation like y=(x+2)^2 and it is moved to y=(x-1)^2, it is moved 3 units to the left. If you want to move horizontally negative units then the Parabola will shift to the left, and it will shit to the right if you move positive units horizontally.

Writing equations from given transformations

Writing equations from given transformations is just writing the difference in the Parabola. suppose you have a parabola with the equation y=(x+4), and you have to translate it vertically 5 units up and horizontally 3 units to the left. Your Parabola will move 3 units to the left because it is horizontality being moved. And 5 units up. The new Parabola equation will be y=(x+1)^2+5. If you want to reflect Parabola on the x-axis you will just have to add "-" in front of the (x+1).

Determine the equation from given vertex and a point

Dhruv is using Smore newsletters to spread the word online.