Get email updates from Jasmine:

Pandora is a mythological character. She is know for her box, called Pandora's Box. On this here page, I shall tell you things about her and her story. So let's get started! 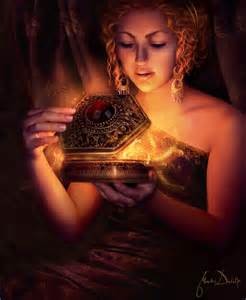 Pandora is a young gorgeous woman. She made everyone have a strong desire whenever they laid eyes on her. She was also very curious and deceitful that if she was a God, she would be the Goddess of Curiosity, but it's not her fault she's like that, the Gods made her that way. She has a few parents. In one story, it tells that Zeus commanded Hephaistos to make her and Athena and Aphrodite adorned her. In another story, it tells that Prometheus and Epimetheus created her. She was made out of clay.

Her husband is technically Epimetheus, since she was given to him as a gift. She also has a daughter named Pyrrha, without her all humans would be extinct. Pandora is also known as the mother, or releaser, of troubles. She was created on Mount Olympus.

Her other name is Anesidora, meaning "Sender of the gifts."

Pandora means "One who gives all gifts."

It all started when Prometheus stole fire to give to the mankind. Zeus was angered by his actions that he created Pandora, the first woman created, to punish the humans. He commanded Hephaistos to create her and had Gods shower her in gifts. He then sent her to Prometheus's brother, Epimetheus, as a gift. At her wedding she received a box as a wedding gift from Zeus.

They had given the key to Epimetheus so she wouldn't be able to open it, but when 20 minutes passed she couldn't resist. So she snuck into Epimetheus's room and took the key. She unlocked the box and as soon as she lifted the lid, all evil blasted out of the box, releasing it into the world.

She immedietly closed it, but it was to late. When she looked down, there she saw Hope. Hope fluttered out and brought hope the the humans. 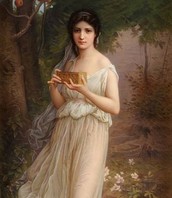 Pandora and her Box 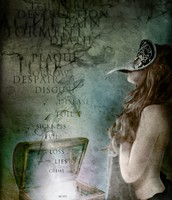 All the Evils in Pandora's Box 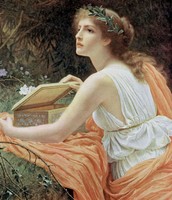 Pandora with the Box lid open

A Retelling of Pandora's Story (Summarized)

A woman named Applied Ethnomusicology was in her office at the University when Colonialism came in and asked her to take care of his box. She agreed to do so and he left. She was left with the box when she suddenly started hearing whispers coming from the box. "Let us out." they would whisper. She tried to ignore it until she was curious. She opened it and out flew evil secrets. She closed the lid, but she heard the whispers again. She opened it once more and there she saw Hope. It held confidence in the humankind to perceive wrong doings. So from there on out, she held onto Hope.