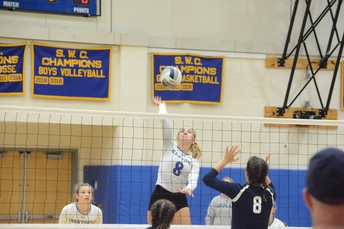 As the Fall season is now officially over, I am extremely proud looking back on what all of our teams accomplished during the past 4 months. The fall season was highlighted with the Nighthawks Football Team winning the LL State Championship, and the entire athletic department had many memorable moments during the fall 2019 season!

I would like to genuinely thank each and every one of our coaches for all the time, effort and energy they put forth on a daily basis, as well as the buy-in and dedication displayed by all of our student-athletes everyday. When your fall season starts on August 24th and continues until mid December, a must have are coaches who are also team players! Ours are the best by far, and their dedication, and loyalty to our programs will never go unnoticed.

The 2019 Fall Campaign was extremely successful, with SWC Championships in Girls Cross Country, Girls Soccer and Football. The Boys Cross Country, and our Swim & Dive Teams were SWC Runner-Ups.

On the soccer field, our girls finished with a regular season record of 8-1-7, with their second consecutive SWC title, and finished with two All State players; Karsen Pirone and Sydney Howard. Pirone will be playing at Sacred Heart next fall. The girls soccer team volunteered at the Booth Book Sale for the 12th year in a row, held a March of Dimes Benefit Game to start their season, and walked and collected donations for the Faith Food Pantry at the Labor Day Parade.

On the boys side, second year coach Charley Amblo and his team finished with a record of 8-7-1 overall. The boys were recipients of the SWC Sportsmanship Award and had numerous players on the All Academic SWC team. The staff was ranked first for sportsmanship for the second year in a row and the players were ranked second. The team also received a separate sportsmanship award from the referee association, the Robert Sterling Award from the WCSOA is such an honor to receive.

In the pool, the Girls Swim Team finished second in the SWC to powerhouse Weston. The girls started the season without a home pool, so a huge thank you to the Newtown Community Center for allowing our girls to use that beautiful facility for practice. The girls finished the regular season with one loss and had multiple student-athletes advance to State Opens. They also volunteered at the Newtown Community Center and held a fundraiser meet for the Susan G. Komen Foundation.

On the court, the NHS girls volleyball team finished 4th overall in the SWC and had multiple all SWC, and All Academic performers. Genevieve Murray was All State and Veronica Kroha will continue her volleyball career playing for Keene State College. The girls ended their season volunteering their time to help Mrs. Calandros food drive.

The girls and boys Cross Country teams had successful fall seasons as well. Boys head coach Carl Strait experimented with a 12 captain scheme utilizing all seniors as captains to their 4 person squad. Each were responsible for warming-up, working with and training their guys. Feedback from this was extremely positive as the boys took second at the SWC Championship and had multiple runners qualify for States and Opens.

Our girls Cross Country team won the SWC Championship at Bethel with their top 7 girls putting together truly memorable and remarkable performances. The girls went through the regular season undefeated and made it all the way to State Opens. Laura Wong will be running for Vassar College in the fall.

The Nighthawk Field Hockey team put together a 17-0 undefeated regular season. The girls were led by All State performers Katie Dirga and Katie Goyda. The Lady Nighthawks lost to the Norwalk Bears in the quarterfinals of the Class L State tournament.

On the gridiron the Newtown Football team put together a truly remarkable season finishing with a 13-0 record and an SWC and LL State Championship. The team had numerous All State players as well; James Knox, Jared Dunn, Kyle Good, Jack Mulligan, and Jack Zingaro. Mulligan and Zingaro both received the Walter Camp Award and the New Haven Register. James Knox will continue his football career at Columbia in the fall.

The NHS Unified Sports Soccer team had over 60 participants and participated in tournaments at Bunnell, Pomperaug and Bethel, and hosted their own at the NYA. First year coach Kirsten Tuz took the helm, replacing long time and CIAC Unified Coach of the Year Kathy Davey

The Newtown Middle School Athletic Department is led by a group of veteran coaches and we offer various interscholastic athletic opportunities during all 3 seasons. In the fall, N.M.S offers Girls and Boys Cross Country and Unified Soccer. Our Girl Cross Country Team is led by Head Coach and N.M.S P.E Teacher Ken Kantor. The boys team is coached by N.M.S Health Teacher Andrew Tamerro 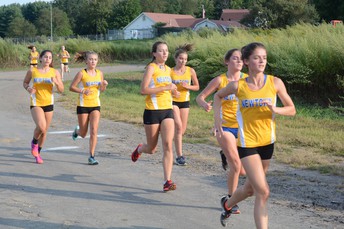 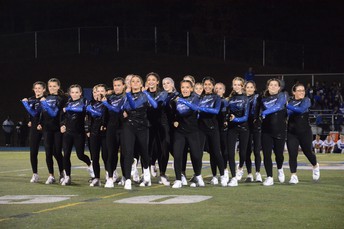 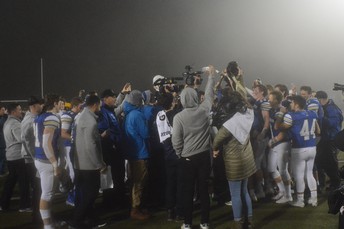 Winter sports are almost two months in and are shaping up to be very successful.

Both programs will be competing at various meets at Yale University, Wesleyan College, Bethel High School and more. Our athletes are lucky enough to have practices 3 days a week at the beautiful NYA facility.

The Newtown High School Gymnastic Team, who practices daily at Kinetic Kids is off to a hot start winning their first meet against Farmington, and finishing second in the Pomperaug meet. The team is led by Head Coach Kim Kane and Captain Mary Locke, along with Co-Captains Hannah Casey and Marissa Choi.

The Newtown Dance Team is also gearing up for the SWC Championships and States, which are held on February 14th and February 29th respectively. The dance team is led by Head Coach Cheryl Stenz and Captains Kaitlyn Tripodi, Kylee Raiano, and Olivia Cavallero.

The NHS Boys Swim and Dive Team is somewhat smaller in numbers this year, but Coach Fielding, Coach Eberts and the boys are working hard in the pool everyday to return back to the top of the conference. Newtown is led by captains Mason Suba, and Rick Irving.

The NHS Boys Ice Hockey Team is also smaller in roster size, and after a rough start, have won their last eight games. Coach Paul Esposito (20th year) is being assisted by Pat McLoughlin and Andrew Gardner. Seniors this year are Mathais Paltouf, Jack O'Connell, Jack Stanton and Adam Kliczewski.

The Newtown Unified Sports Basketball program currently boasts over 60 student-athletes and partners, and are participating in a number of single games and full tournaments. Newtown is hosting it's annual basketball tournament on February 7th, at 3:00pm at the Newtown Youth Academy.

We are also very proud that this year we have 5 Newtown students participating in the Girls Ice Hockey Co-op with Masuk, Bethel and Joel Barlow. NHS Team members are: Catie Gregory, Annie Fowler, Naha Nawaz, Bridget Nicholson, and Mia Paltauf.

New to NHS Sports this year, is our Downhill Ski Co-op with Pomperaug. The team consists of: Tyler & Kyle Fralley, and Lauren, Matthew, Andrew & Nick Jacobs. This team who is currently undefeated, ski on Mount Southington. 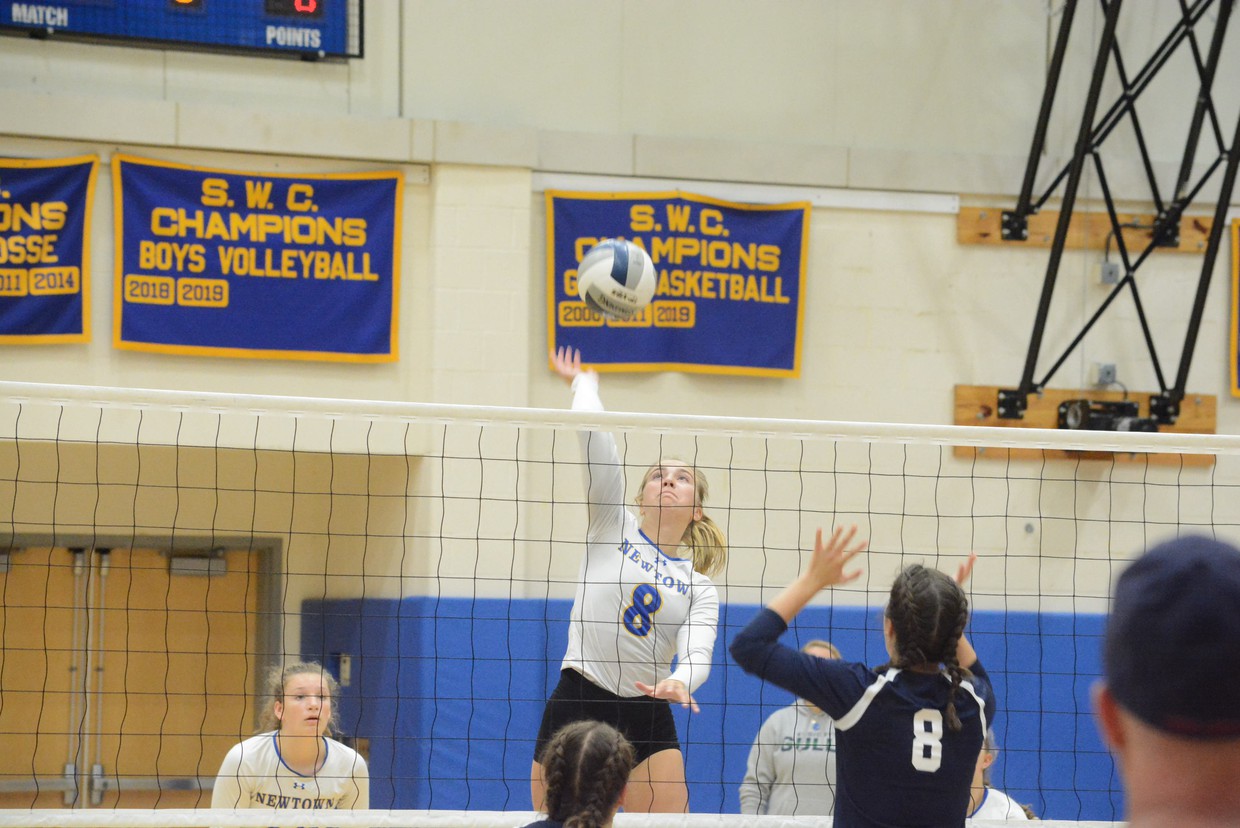 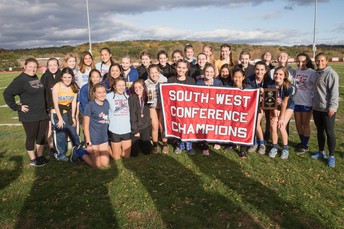 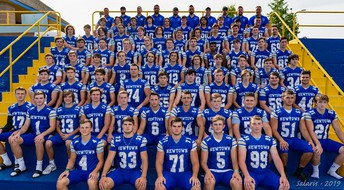 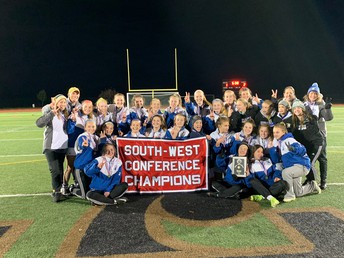 Back to Back SWC Champions

The Spring Season is an exciting time here in Newtown, because with it comes outdoor sports with warmer temperatures, the anticipation of moving up and graduation ceremonies, and of course, the energy that comes with the end of another school year.

The department will officially open spring registration on February 10th at FamilyID.com

Newtown offers the following sports in the spring:

For information on all spring sports, including our coaching staff please visit nighthawksports.com.