Acting in Obedience to our oath

Acting in Obedience to our oath 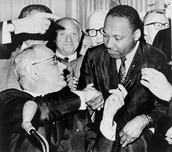 "In such a case our duty must be clear to all of us. The Constitution says that no person shall be kept from voting because of his race or his color. We have all sworn an oath before God to support and to defend that Constitution.

The Voting Rights Act of 1965 was made to ban racial discrimination in voting by the federal, state, and local governments.It was passed in 1965 after a century of deliberate and violent denial of the vote of African-Americans in the South and Latinos in the Southwest also the many years of entrenched electoral system that shut out citizens with limited English.The Voting Rights Act is often referred as "the most effective civil rights law ever enacted.

The Voting Rights Act was the solution for voting discrimination