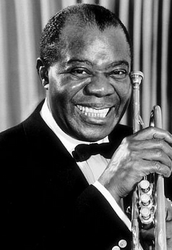 The Life of Louis Armstrong

Louis Armstrong was born August 4, 1901 in a very poor part of New Orleans, LA called "The Battlefield". Soon after the birth of Louis his father left him and his mother turned to prostitution. Most of his childhood was spent with his maternal grandmother because his mother was rarely home. When he was in the fifth grade he had to leave school and start working. He found a job with a family named the Karnofskys who gave him a job delivering coal and collecting junk. The family loved his voice and encouraged him to sing often.

His first musical exposure was at the Colored Waif's home for boys, where he was sent after firing a gun into the air at a New Years Celebration. He fell in love with cornet and music, so when he was released from the home in 1914 he went out to start a carrier as a musician.

Four years later, in 1918, he married Daisy Parker and adopted a three year old named Clarence. Clarence mother died in child birth and was mentally disabled do to a head injury that he had at two. Also he took the place of Joe Oliver in Kid Ory's band. The band took off and he was able to quite his manual labor jobs to focus full time on his music.

In 1922 Louis Armstrong was called up by Joe Oliver and offered a job in Chicago as second cornet in King Oliver's band. Louis took Chicago by storm and on April 5, 1923 he got his first record solo on the "Chimes Blues" album.

Soon after he remarried a women named Lillian Harden who convinced him to go play for Fletcher Henderson Orchestra. This band gave him more creative freedom and he was able to experiment around with the sound of his cornet. Then he finally switched from cornet to trumpet in 1926. In 1928 he teamed up with Earl Hines and together they made some famous songs like Weather Bird and West End Blues. 1932 was a big year because he began appearing in movies and became well known through the US. In 1938 he remarried Alpha Smith and moved into a house where he would live for the rest of his life. Later on he wrote many songs such as "Hello Dolly" and "What a Wonderful World" but they did not have the same 1920's sounds of his other ones.

Why Is He Important to American Culture?

Well Louis Armstrong was one of the main leaders in the change of music style from the 10's to the 20's. It started when he was in the Fletcher Henderson Orchestra. He received many solos and he would put his little flare on each. This was then incorporated into the songs the orchestra played. When people heard this from the well known and highly respected orchestra they started to think that this was the music that they should start listening to. Of course there were many other artist who contributed to the 20's but Louis Armstrong was a main contributor. Nowadays when someone hears a glissando or they jazzy swing they can thank the 20's and artist like Louis Armstrong.

This is West End Blues by Louis Armstrong. He worked with Earl Hines to write this song in 1928. At this time Louis was well known throughout the US for his trumpet and cornet skills and he was no known for his voice yet. That is why there are no words in this song. West End Blues was a significant piece because it showed that Armstrong was ready to work in the big leagues and it showed the world their first look at some of Louis soon to be famous pizzaz. Click here to listen to West End Blues. 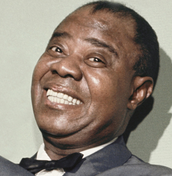 Louis Armstrong as you heard in the song above started out just writing music and not singing. If you listen to West End Blues you can here Louis famous sort of swinging technique where he does his famous glissando's. Louis really demonstrated the style of the Jazz Age amazingly as he led the artist of the 20's through a change in the style of which people played music, and that style of music is still in our times as proven with Tony Bennett.

Louis and Tony are also a little different in the sense of Tony doesn't lead the major changes in pop culture but incorporates it into his music. Also Tony has famous artist perform with him as well, like Lady Gaga, and that is why he is still famous today. Louis on the other hand led the big change in style and would also duet with other famous artist. 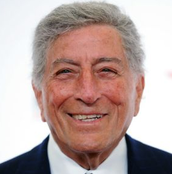 Here is one of Tony Bennett's songs, Firefly. Notice how the music its self is not the main focal point of the song but is not just the background to the singer. Today's artist usually focus on the words portraying a message but when I here music from the Jazz Age I think the music its self gives the message. That's why I like Tony Bennett so much he is one of the very few artist who still have that rich culturally filled style, like Louis Armstrong did.