why did the Americans want to go to war against England when they (thought) they knew England was going to win?

Because they knew that no mater what God would be with them God is the one who gave them the power to be brave.

How many soldiers died and got injured during the American Revolution? 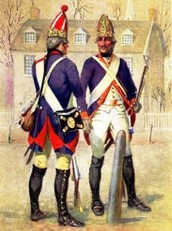 Who were the Hessian soldiers?

The Hessian's were Germany's best men. Germany fought on the side of the British.

Battles of Lexington and Concord, Massachusetts, 1775

the battle of Lexington and Concord is what started the The American Revolution.

Battle of Lexington and Concord, 1775

The first battles of the American Revolution

The Battle of Guilford Court House was a battle fought on March 15, 1781, at a site which is now in Greensboro, the county seat of Guilford County, North Carolina, during the American Revolutionary War.

George Washington and his Men

on this day in 1781, General George Washington, commanding a force of 17,000 French and Continental troops, begins the siege known as the Battle of Yorktown against British General Lord Charles Cornwallis and a contingent of 9,000 British troops at Yorktown, Virginia, in the most important battle of the Revolutionary war.