Get email updates from Abraham:

The purpose of this film Chasing Ice informs the audience that ice glaciers and icebergs are melting due to climate change and there is evidence proving it and it's happening because of us. 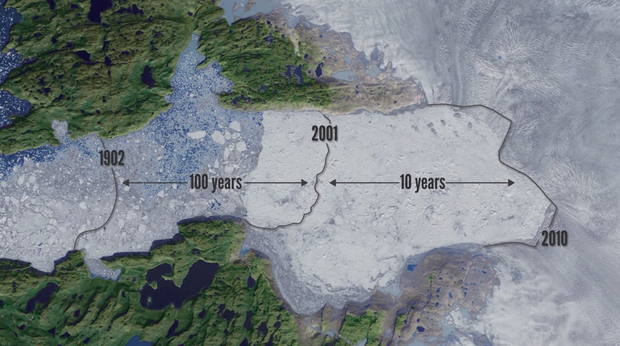 The image shows the harsh environment the crew was in and the places they had to place cameras at to capture footage.

The image shows how much the glacier melted in a short period of time. The red line represents where the glacier used to be at.

Ancient bubbles are what scientists call, the bubbles carry rich archive of past information.

The clip shows the largest calving filmed by Chasing Ice. Calving is the breaking of ice chunks from the edge of the glacier that fall into the water. Ice breaks because of the forward motion of a glacier makes the terminus unstable.
"CHASING ICE" captures largest glacier calving ever filmed - OFFICIAL VIDEO

After watching the film, it makes me wonder how the ice glaciers look now and how far they have retreated since 2012 the year the film was released. ice melting is causing the sea level to rise which can cause floods in some areas. We are destroying animal habitats. There has been a climate change happening since forever and something needs to be done bout it.
Below you can watch the full documentary.

gomovies.to
Chasing Ice The National Geographic photographer James Balog spend years in Greenland, Iceland and Alaska in order to capture pictures of ice crashing off the glacier. His project prove the effect of global warming to the glacier and won Satellite Award for Best Documentary Film.

Follow Abraham Rodriguez
Contact Abraham Rodriguez
Embed code is for website/blog and not email. To embed your newsletter in a Mass Notification System, click HERE to see how or reach out to support@smore.com
close