Rajaya is using Smore newsletters to spread the word online.

Get email updates from Rajaya:

A major political leader before and during the Russian revolutions of 1917. He fled to russia during the revolution to live in Europe and then to the united states.

a Russian communist revolutionary, politician and political theorist. He served as the leader of the Russian SFSR from 1917, and then concurrently as Premier of the Soviet Union from 1922 until his death.

a Russian Marxist revolutionary and theorist, Soviet politician, and the founder and first leader of the Red Army.

Women of the war 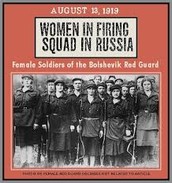 Women workers in industrial centers rises to over one million as 250,000 women have joined the workforce . Peasant women are also taking on new roles, doing some of their husbands farm work and factory jobs if their husbands have been killed. Women fight directly in the war in small numbers on the front lines, often disguised as men, and thousands more serving as nurses.

Febuary 23, 1917 Few women at factories angry at the food shortage demanded bread to feed their families, over the next few days most of the factories and students have joined. What will czar do.?

workers and managers givien bonouses, punished those who did not meet the goals required. Stalin buit factories and hydro-electric power stations, along with railroads mines and increased steel coal and oil preduction. Because of the high goals products were not of the best quality.

After joining Russian Revolution Stalin was appointed the general secretary of the parties central committee managing to consolidate power following the death of Vladimir Lenin. After ridding the oppositions and expanding the functions of his role he became the unchallenged leader of the Soviet Union. Following the policy of "socialism in one country" he replaced the New Economic Policy that coincided with the imprisonment of millions of people in soviet correctional labor camps and deportation to many other areas leading to the catastrophic soviet famine.

Rajaya is using Smore newsletters to spread the word online.