By Ethan, Nikolas, Trent, and Brandon

By Ethan, Nikolas, Trent, and Brandon

False Dilemma: The radio gave false dilemma of "choices", either be overcrowded or clear out some space.

Appeal to Pity: On radio session, student is pitiful towards the teachers about the overcrowding space.

Bandwagon: Radio session mentioned that some schools are open-campus and even the other schools are considering it.

This ad will broadcast over popular FM stations so that teachers have a higher chance to hear it. 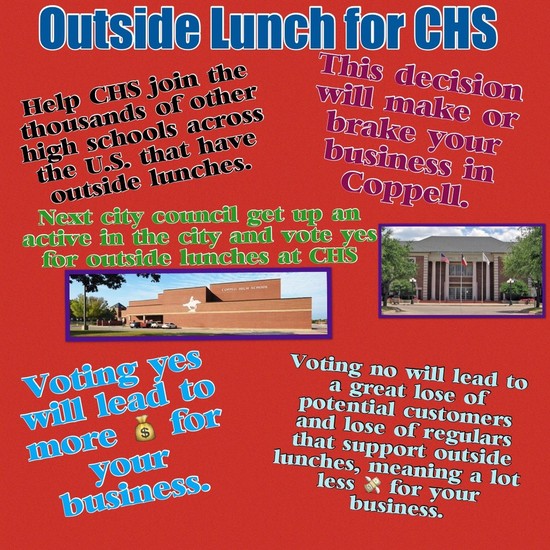 Speaker- CHS student in support of outside lunches. The speaker was chosen because the students have the most drive to get outside lunches and this also affects students the most.

Target Audience- Business in the Coppell area in semi close proximity to the high school. Business' will be directly affected by this decision and have a large motive to vote yes in the decision.

Ad placement- This will be presented to restaurants/fast food places across the Coppell area. These are the people students need to get on their side and get support from in the city.

Bandwagon- In the poster it mentions helping CHS join the thousands of other high schools in America that have outside lunches which is bandwagon. It is bandwagon because it talks about doing what many other people are doing and CHS should do it too. This is what Bandwagon is and it is a very useful and effective propaganda technique used many times in history and is still used today, from the nazi party to everyday commercials.

Glittering Generality- On the poster it said that voting yes would lead to more money which is very general but sounds very nice, but there are many more factors than just voting yes that leads to more profit for the business. The statement was extremely general but statements like these have been working for decades as propaganda techniques.

False Dilemma- In the poster it is stated that the decision of voting yes or no will make or break the business in Coppell which creates a false dilemma. This statement falsely creates two ways the business could go from this one decision. Most likely the business won't actually fail if it is fine at the moment if it voted no at city council.

Appeal to Fear- This ad has appeal to fear in it when it says voting no will cause a great lose of potential and regular customers. This will lead to a lose of money which no successful business wants. The restaurants/fast food companies will feel a need to vote so they won't lose valuable customers which keep the business afloat. 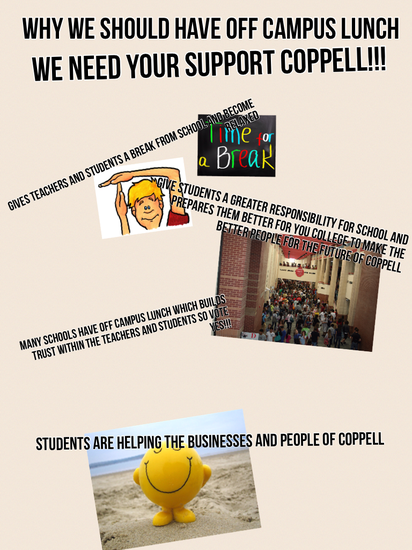 When I said the students are the future of coppell and off campus lunch this needed for them to be successful.So the community thinks this is a needed thing at lunch.

I said many school have off campus lunch to make people think everyone has it so why don't we.

Appeal to fear-I said that the businesses in coppell have to have the students buy from them at lunch or they will go out of business and people don't want that so they should be convinced to vote for this.

Appeal to pity- Gives a “relatable situation” where a table is too crowded and food falls off of a table. It makes having off campus lunches seem like the only way to solve this problem.

Bandwagon- The ad gives a “let’s all change things for the better” type of vibe which makes it easier to get behind.

Glittering Generality- The ad gives reasons why having off campus lunches would be a good idea through a sentence that explains how eating somewhere else can help your mental stability, and give you the energy you need to get through the day.

Plain Folk- This is a problem that lots of people can relate to, so it gives a personal feel and inspires a positive response to the ad.

Ad placement: This ad will air on KCBY and on major drama channels that students watch.