The Planet of Mystery

The Planet of Mystery

Written and Illustrated By Jonas Braunfelds

The red planet, also known as Mars, has always been a planet of mystery. No person has stepped on mars yet. Mars looks like a red disk in the sky from earth. Mars is the seventh largest planet. Mars was named after the Roman God of War. It appears red from the red dust on its surface. A long time ago during war people use to think that Mars was red from people fighting on mars. Mars is the fourth planet from the sun. Its 141,000,000 miles from the sun. Astronomers are trying to find out if the climate on Mars is bearable to humans. The temperature on Mars can range from -10 to -150 degrees Fahrenheit. On Mars, the temperature can change 20 degrees in 1 second. Mars is smaller than Earth. The diameter of Mars is 4,210 miles. A Mars day is 24 hours and 37.5 Earth minutes and a year is 687 Earth days. Mars has two moons. Mars’ bigger moon is named Phobos and the smaller one is Deimos. Mars has one more moon than we have on Earth. Mars travels on elliptical path around the sun just like Earth. But since Mars is farther from the sun than Earth, it takes 687 Earth days for Mars to orbit the sun. Now Mars’ atmosphere is very thin and is mostly made of carbon dioxide.

When astronomers started looking at Mars carefully, they found things that were similar to Earth. One of the similarities was that it takes Mars one day to fully rotate on its axis. Mars also rotates on its axis while its orbiting around the sun. Mars also has ice caps on its poles. Astronomers saw dark spots on Mars and decided that they were oceans. They later found out that the dark spots where volcanoes. The biggest volcano on Mars is Olympus Mons. Olympus Mons’ peak soars 15 miles above the surface. That's almost three times as high as Mount Everest, Earth's highest peak. Olympus Mon may be the biggest volcano in the solar system. Mars’ surface is covered with craters just like Earth's moon. The surface of Mars is like a red desert. Mars is also tilted on its axis so that means Mars most likely has seasons like Earth. Mars has ice caps at it poles like earth. Astronomers believe that a few billion years ago Mars had an atmosphere with oxygen and carbon dioxide, and then lost its atmosphere. Along with several canals found in pictures of Mars, astronomers believe that Mars long ago supported life and maybe still could support secret life. Astronomers believe that all the water may be somewhere they have not yet been on mars or it all dried up.

The USA and USSR have both tried to send rovers, satellites, and unmanned space ships to Mars to try to learn more about the planet of mystery. One of the rovers that the NASA sent found two very interesting finds on Mars’ surface. One of the interesting discoveries was that there was what looked like a footprint on Mars’ surface. The second one was what looked like a human face sand sculpture, which would have to be pretty recent because Mars has sand storms and it would have been blown away. In 1976, NASA tried to find out more about the red planet. Two unmanned Viking spacecrafts sent by NASA landed on Mars’ surface. The ships were like little laboratories. There were equipped with cameras, scoops, and instruments to do tests. The ships found dried but lakes but no signs of life. NASA was disappointed with the Viking mission. NASA tried again in 1996. It launched the Mars Pathfinder with a rover, called Sojourner, that looked like a big skateboard that was going to roll off the Pathfinder and explore Mars’ surface. The ship was unmanned and the rover was going to be controlled from computers on Earth. In 1997, the Pathfinder landed and the Sojourner, which means the traveler, rolled off the Pathfinder and collected rocks and took pictures of Mars and then brought them back to Earth. The Pathfinder did not reveal anything amazing. But that would not stop NASA.

NASA is trying to learn more about Mars. It wants to someday create an exploration team of astronomers who would just study Mars. In 1996 just before the Pathfinder launched NASA launched the Mars Global Surveyor which will take pictures and map out the surface of Mars for 2 years it will never land on the planet. The red planet will always be a planet of mystery and every day there will be something new to discovery on Mars. 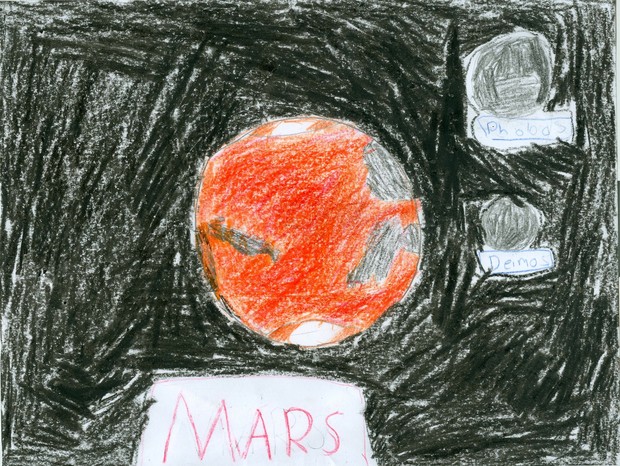