The transport or trade of people for the purpose of sexual slavery, forced labor or commercial sexual exploitation for the trafficker or others.

Sex is not for sale 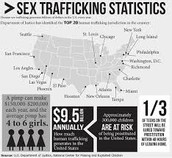 7 Charged with Trafficking and Prostitution of 17-year old girl:

In Golden Colorado a 17-year old homeless girl met a couple at a liquor store in June 2014. They let her stay with them but later told her she would have to prostitute in order to stay. They took pictures of her in lingerie and posted them to websites to solicit men to have sex with her. She was given a prepaid phone card to contact customers who responded to their ads.
"Good Luck" -- Taken

Sarah is a 17- year old who grew up in rural Ohio. She ran away from home and later that day met a 30- year old. He took her to get her nails done and asked to see her again the next day. For the next two months he took her out and kept acting like a loving boyfriend, even asked her to move in with him. But after a month of living together he said he couldn't pay for rent and needed her to go on dates with older men and engage in commercial sex. One night Sarah was out on the street and a older guy raped her. She then called the police and was taken to the hospital where they helped her. Polaris provided emergency housing and emotional support for her. She broke up with her boyfriend and is now living in her own apartment.