AJT Pop-Ups: A national series of spontaneous events on Jewish theatre and performance, organized by AJT, to engage the entire community through exciting discourse! 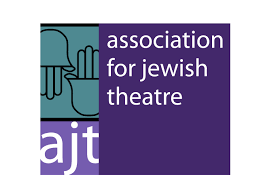 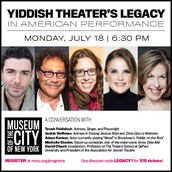 The historical influence of Yiddish performance on American popular culture can still be felt to this day. As The New York Times wrote in a recent review, "Where else but on the Yiddish stage would a comic relish the opportunity to expound on Albert Einstein’s general theory of relativity to a friend on a park bench: 'If you’re in a room with a woman, kissing her, an hour is like a minute,' he explains. 'But if you should sit on a hot stove, a second is like a year.' To which his friend replies: 'And from this he makes a living?’" Join David Chack, Professor at The Theatre School at DePaul University and President of the Association for Jewish Theatre, as he facilitates a discussion about how being Jewish leads to "performing Jewish" and the ways that performers still connect to traditions forged on the Lower East Side more than a century ago.

Tovah Feldshuh, Actress, Singer, and Playwright
Jackie Hoffman, Actress in Kissing Jessica Stein and Once Upon a Mattress
Adam Kantor, Actor currently playing "Motel" in Broadway’s Fiddler on the Roof revival
Michelle Slonim, Stand-up comedian; star of the meta-comic show Date Me!
David Chack (moderator), Professor at The Theatre School at DePaul University and Executive Director of the Association for Jewish Theatre

This program delves into the themes of our exhibition New York's Yiddish Theater: From the Bowery to Broadway.

Send us an email at etaylor@afjt.com and let us know your coming!