What is the State of This Place ?

What is the State of This Place ? 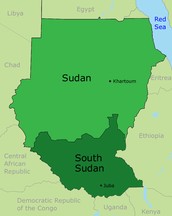 What is a state ?

A state features; permanent populations comprising peoples who are not necessarily culturally homogeneous, it is a defined territory, recognised sovereignty and has a functioning economy and government.

South Sudan now qualifies as a state as it has a permanent population which consists of a number of different cultures, languages and tribes. There is a defined border to south Sudan as of January 9 2011. They have their own government and economy and they exercise control over their territory.

Is South Sudan a Nation or Nation-State ?

I would consider South Sudan to be a nation state. Whilst their culture is largely the same and they share the same history in terms of the formation of their country yet differ slightly due to the tribal nature of the country. They have a permanent population, a defined territory and a recognised sovereignty with a generally cultural homogeneity.

Here are some examples of different countries and wether they are a State, Nation or Nation state:

What's the difference between a state and a nation state ? 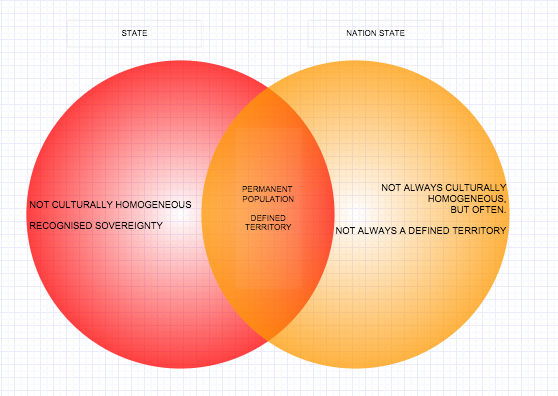 Sovereignty refers to a nation, state or nation state having a recognised ability to exercise effective control over a territory. The current civil war in south Sudan between two political leaders and the uprising of tribal disputes prevents the government in exercising control over it’s people and the state. The presence of Sudan also may interfere with it’s ability to enforce soverneignty.

What will the primary aim of South Sudan be and Why ?

The primary aim of south Sudan in the coming times is to maintain and improve apon it’s economic and trade interests. Due to the countries new found sovereignty they will be interested in increasing the growth in agricultural and oil sectors. This will help provide them with the economic funds the need to maintain a stable government and border. These aims are held to ensure a solid and working government and to create a safe and prosperous country.

What are South Sudan's national interests ?

South Sudan has a number of national interests including improving governance, ending human rights violations, and eradication corruption. They also have interests in developing their economy and creating a better trade relationship with Sudan.

How have national interests changed over time ?

National interests in the past have mainly been focused on national security. In recent times it has moved more towards the maintenance of a countries strategic interests, economic anf trade interests and their reputation in the international scene.

Samir and Oumi believe that their government should be aiming to achieve transparency and integrity. The also which to see the ending of human rights violations as Sumi fears being forced into becoming a child soldier and Oumi fears for her and her sons life. Oumi is worried in the governments aim to improve governance, she feel she may be targeted due to her cultural beleifs.

Evaluation of the new State

Explain the background circumstances that led to the need for a referendum between North and South Sudan.

Religious and tribal tensions are to blame for the split between north and South Sudan. The separation allowed the people of South Sudan ( a largely Christian population, or indigenous religions) to become their own country and move away from a largely Arab and Muslim north. After nearly half a decade of civil war in Sudan, the referendum marked peace between the Sudanese government and the Sudan peoples liberation Army in the south.

Judge how beneficial South Sudan’s newfound independence has been for the state?

The independence has relieved immediate wider tensions between the north and south, but tensions have immerged within the country. The country began to grow sectors in agriculture and oil production and the government was focused on finding stability and jobs for it’s people.

Create a list of advantages and problems, which have or could occur for South Sudan. (Consider what it has or could mean for other African states).

Increased stability in the government.

Prospering economy due to agriculture, oil and other forms of trade.

Teething issues amongst the new government.

Issues between cooperation in the north and South

Lack of economic growth and funds.

How might the view of independence differ for Samir’s mother Oumi compared to a mother in Sudan?

Independence to Samir’s mother is more a symbol of safety and growth where as independence to a mother in Sudan is less of a burden on her own government and means that her government has more time for her needs rather than fighting with the south.

Imagine that you are Samir.. How could the his new state be both a blessing and a curse for the future?

Samir now has opportunities that he may not have had in a state where he and his beliefs were not tolerated. Although Samir now living in a very young country with limited resources prevents him from experiencing the world that he wants to see. He has also grown up with a world of fighting both internally and externally in his country, this burden of death and fighting would damper his enthusiasm for the world.

If you were in a similar situation where part of Australia was in conflict, how would you react?

I’m not sure how I would act. I wouldn’t violently take part in any action but I’m sure I would take sides. Having spent most of my living life in Victoria I would most likely side with the opinions and values that our state held. I would like to think that I would have enough tolerance to look at the conflict as a whole and not just join in for fun. If the conflict was between different parts of Australia and my life was not directly influenced I would take interest yet I wouldn’t feel passionately about the issue.

What have the international community done ?

Countries such as the US, UK and France have sent troops to help with peace keeping efforts on the ground with the UNMISS. They have also ceased trading with the country in the effort to try and urge President Salva and Riek to sign a peace deal and to maintain a peace deal. The ICC have made efforts to bring accountability to those who have committed war crimes and crimes against humanity during the crisis. This is difficult to do whilst the conflict is still unfolding and when there is not a security council on the ground in South Sudan.