Get email updates from Maddy:

By: Ashlyn, Araya, Maddy and Natalie

By: Ashlyn, Araya, Maddy and Natalie

The speaker are sophomore students who are concerned about freshman getting lost, overcrowding, and a better education for the 9th graders. People who want freshman to get a better high school experience.

The purpose is to persuade the school board, parents, teachers and students to build get involved in a freshman center. Our propaganda is to give reasons why building a freshman center at Coppell High School would benefit the incoming freshman.

A Letter To the School Board (Ashlyn)

Target Audience: The School Board 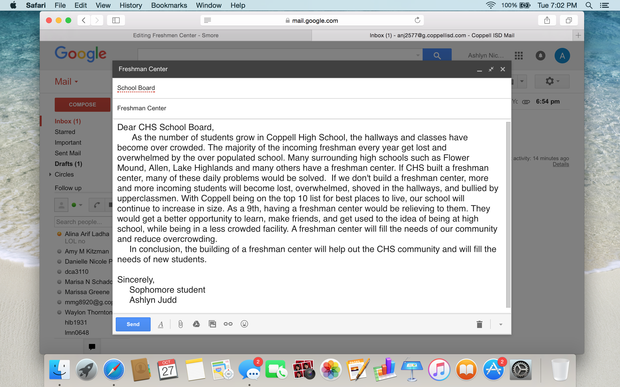 I used 3 types of propaganda in my email I sent out to the School board.

I used the propaganda technique "appeal to fear" when I wrote, "If we don't build a freshman center, more and more incoming students will become lost, overwhelmed, shoved in the hallways, and bullied by upperclassmen." This exemplifies appeal to fear because new students don't want to be overwhelmed, lost or bullied. Using this technique, the School Board would consider building a freshman center because they wouldn't want the possibilities of that to happen to more freshman.

I made a Twitter account to reach the students because I believe the easiest way to reach them is through something they use everyday, Twitter. Through creating this Twitter account they will be able to just click on the @CHScenter page and see tweets from upperclassmen, facts, and a catchy slogan that will get them thinking about this problem. 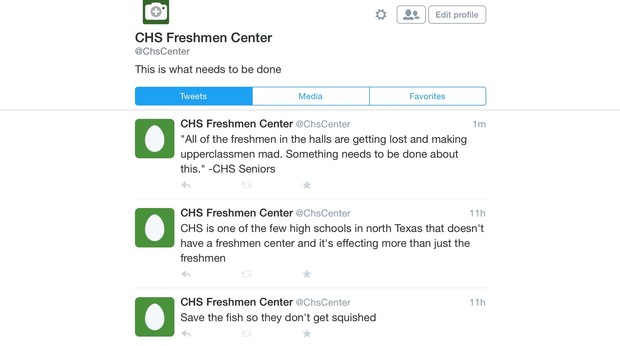 I used three different techniques in the tweets sent out to the students.

The technique of bandwagon was used in the tweet that said "CHS is one of the few high schools in north Texas that doesn't have a freshmen center and it's effecting more than just the freshmen." This is a bandwagon technique because talking about all of the other high schools that have a freshmen center will make it seem as if it is a normal thing to have now but we are just not up to date at our school.

The technique of slogan was used in the tweet that said "Save the fish, so they don't get squished." This slogan was a catchy way to get out that upperclassmen are concerned about the freshmen or "fish" getting run over and pushed around in the hallways because they are walking so much slower and sometimes are even lost.

The technique appeal to fear was used in the tweet "All of the freshmen in the halls are getting lost and making upperclassmen mad. Something needs to be done about this. -CHS Seniors." This tweet shows how the freshmen ruining the flow of traffic the hallways is really getting to the seniors. Most people in the school respect the seniors and if they say something then most of the underclass men will really see what they're talking about. This is appeal to fear because other students are scared of the seniors and believe they should follow what they say.

A send home flyer for parents to sign (Natalie) 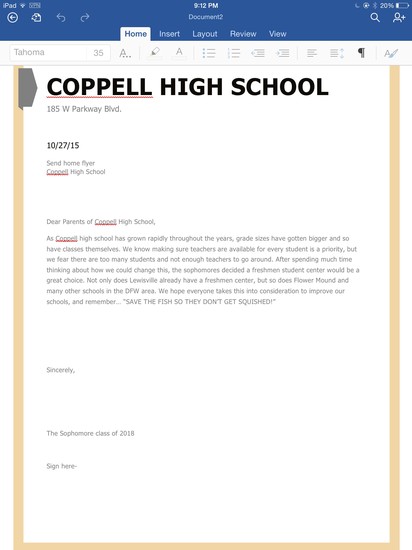 I used 3 types of propaganda in my take home flyer

I used the appeal to fear technique by telling the parents their kids might not get as much one on one attention from teachers as they would like. I told the parents "we fear there are too many students and not enough teachers to go around. That could cause problems in the future because of bad grades or something like that. Using the appeal to fear technique could persuade parents so that their kids could get the proper attention.

I used the bandwagon technique by naming other schools who had already have a freshmen campus. This shows that if other schools think it was a good idea, we must take it into consideration as well. People who are moving to Coppell could also look to see which school is most advanced, and with a freshmen center, Coppell would have a chance of being the best.

My group decided to use the slogan "Save the fish so they don't get squished". We chose this slogan because it is in a sense true. Many freshmen don't know what they are doing or where to go the first few weeks of school and it's really scary. By having a freshmen center, the hallways wouldn't be as crowded and the freshmen would be more confident.

A poster given towards the teachers of CHS (Araya)

I made a poster to mail out to all teachers and to hang on the walls of the school to alert the need of the freshman center. With visual awareness this poster will catch eyes from the teachers walking down the hallways and mailed to them. 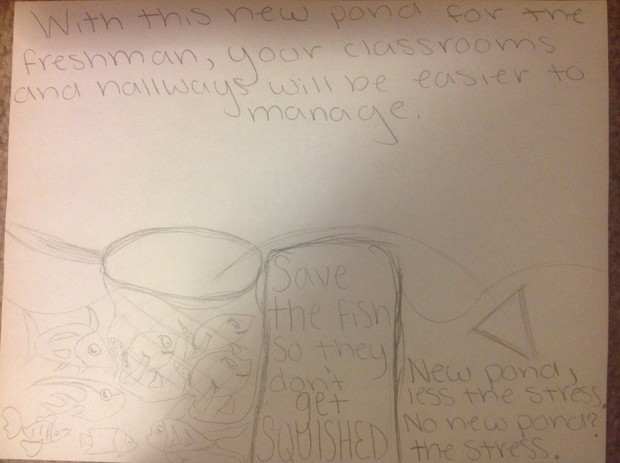 As a group we chose the slogan "Save the fish so the don't get squished" together. In this slogan the fish represent the freshman crowding the hallways getting squished and pushed into each others shoulders trying to make their way to class.

I used 3 types of propaganda into my poster that I will be mailing out to all teachers and posting on the walls and doors of the school to alert at every corner.