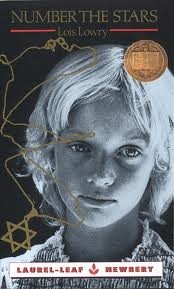 TE: "Alone in the apartment while Mama was out shopping with Kirsti, Annimarie and Ellen were sprawled out on the living room floor playing with paper dolls." page # 27

Rising Action: Jews came for cloths in a coffin to stay warm while they escape.

TE: "It wasn't Great-aunt Birte in the coffin but lots of cloths so these jews can stay warm while they escape.''

Climax: Annimarie was trying to deliver a package to the driver of the ship with the jews on it so the dogs won't smell the jews

TE:"I was trying to deliver this package with god who knows whats in it to the driver of the boat so the dogs smell will be destroyed and they wont find the jews in the little compartment!"

Falling Action: people took care of the jew's apartments while they were away.

TE:"People and neighbors took care of the jews apartments while they were away because thats what good neighbors and friends do."

Resolution: The war ended and freed the country

The conflict of this story is man VS. society because it's the jews VS. the nazies. So the jews are trying to fight agenst the nazies so they can be free and not die in the consentration camps.

Explanation of the Theme

The theme takes place on a small island called Denmark.

TE:''Here on the little island of Denmark stood two girls staring over the ocean to the bigger country, Sweden.''

The protagonist is annimarie because she is caring, loving, loyal, and fun.She is also very fast in races so she can win.

The time period is during world war ll.

What part of world war ll ?-It was the Holocaust.

on the 3rd of March Finland declares war on Germany.