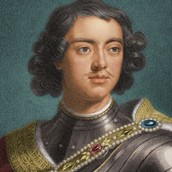 Peter the Great took the throne at the age of 10 in 1682. He did not take over the government until 1689. Peter was not well educated but he was very curious. He spent a lot of his time in the “German quarter,” the Moscow neighborhood where many Dutch, Scottish, English, and other foreign artisans and soldiers lived. When he was there he learned a lot about new technologies.

Peter the Great was a good military and navy leader. He formed Russia's first army in 1699. He improved the economy and got better education. He is remembered as the one who "modernized" Russia. 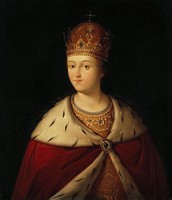 His early reign was taken away by his older half-sister Sophia Alekseyevna who led an uprising of the Russian elite military against Peter. But patience would eventually be rewarded with the deaths of Sophia, followed by his mother and finally Ivan. 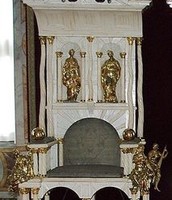 When Peter was only four years old his father died and the throne went to his older half brother Feodor III. Peter had a half-sister who took expedition. As Peter the Great grew older he began to plot to wrest the power from his older half-sister which he did eventually successfully.