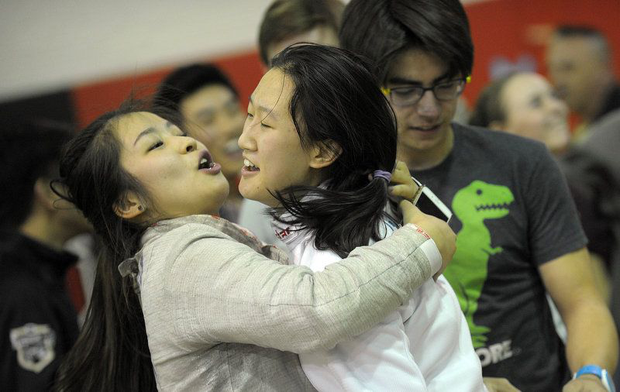 GIRLS FENCING TAKES IT ALL!

"The newly crowned 2017 Girls Varsity State Championship Fencing Team had a thrilling night of competition on Wednesday night (Feb 22), capping off an incredibly successful season. This team of young women demonstrated skill, heart, toughness and sportsmanship that really represented the Bergen Tech athletic department and school system in a wholly positive way. We want to thank the coaches for their hard work and leadership, and also give thanks to your entire AD staff, which has always been incredibly supportive of the fencing team.

The accomplishments of this season far exceed that of the typical “state championship” status of other sports. The state championship in fencing is truly about being the number one team of all NJ high schools. In other sports there may be several state champions depending on division or group level. Columbia and Montgomery, the teams who came in second and third, respectively, for example, have teams two to three sizes bigger in number than ours. In addition to being undefeated in all dual meets, this team placed first overall in every tournament, including districts, counties, Santelli (inclusive of all teams in the state) and of course, the NJSIAA state finals. "

OH THE PLACES WE WILL GO! 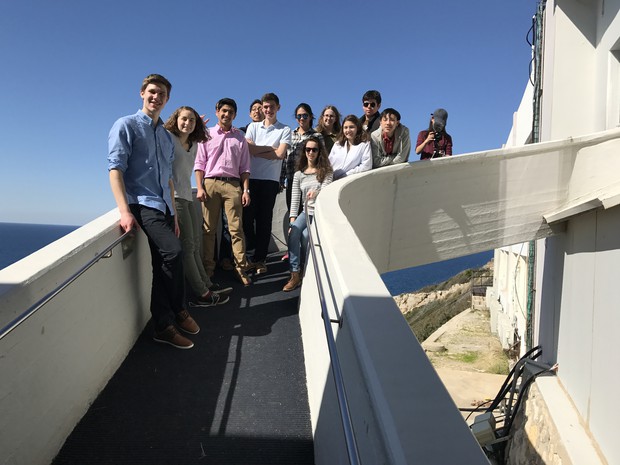 The BCA Stem Delegation to Nahariya, Israel afforded the students an opportunity to explore the vast historical and cultural richness of the Middle East and to focus on the technological advances that Israel has made. Upon landing we were introduced to our tour guide Assaf who was incredibly knowledgeable and stayed with us the entire trip, guiding us, giving us a historical perspective and opening our minds during this incredible journey. We went right to Jerusalem and explored the old city which included the Jewish, Muslim and Armenian sections within the Old city. We went to the Church of the Sepulchre and the Western Wall followed by a traditional Shabbat dinner. We also toured the ancient city of Masada, went to the Ein Gedi Hot Springs and swam in the Dead Sea. A trip to Jerusalem would not be complete without shopping on Ben Yehuda Street.

On Sunday we began our foray into the technological world by visiting the world renowned Weizmann Institute of Science and then a trip to a high tech company where we were able to walk through a clean room dressed head to toe in protective coverings. We had lunch with a Druze family in Dalyat El Carmel and learned all about the Druze peoples. We went to Nazareth, Haifa and Jaffa and learned the histories of these famous biblical cities.

We visited two public high achieving, recognized high schools (including the air force cadet training high school). BCA students presented their research along with watching various presentations by staff and students. We toured Technion University, the most prominent institution of science and engineering in Israel and soon to be located on Roosevelt Island, NYC. We were given an unusual opportunity to visit Ramat David Air Force Base, IAF (Israeli Air Force). We attended a show and dinner staffed by blind and deaf individuals. We visited with Google Tel Aviv. 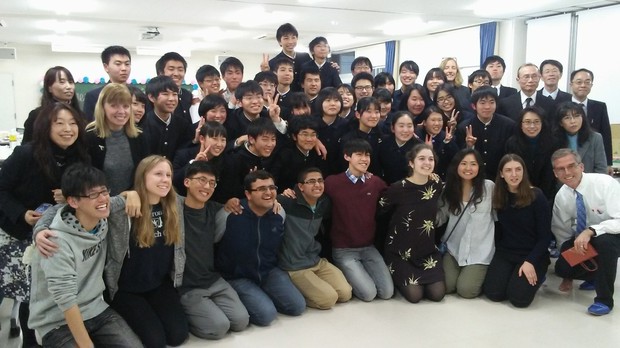 One of the most poignant events was the visit to the Peace Park. There were a lot of people in the museum portion when we were there, and yet there was a respectful silence as we viewed exhibit after exhibit. Outside, it was quite a privilege to stand near the spot where President Obama gave his eloquent speech just last summer, and our Japanese guides had clearly been moved by his words. We took the trail to the ruins of the iconic domed building that often appears in photographs of Hiroshima. 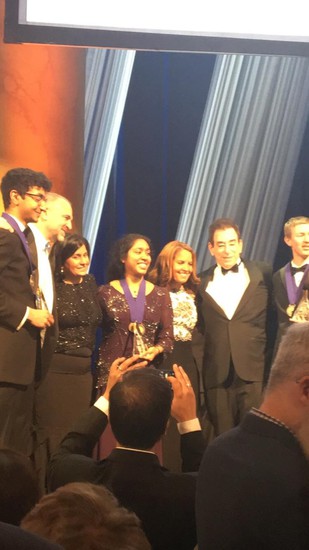 Indrani Das and Jacy Fang were honored in Washington DC on March 14th at the Regeneron STS Finals. As we already know Indrani won the top prize of $250,000 !!! In several interviews with the local press, Indrani offered insight into her research, her desires for her future profession and ultimately what she will do with the monies awarded to her. While Indrani stated that her research was born from wanting to understand the irreversible conditions of brain damage and how to slow its progress, it was also her desire to want to work with patients and become a doctor. Indrani plans to use her prize money to help fund the cost of college and medical school. Congratulations again! 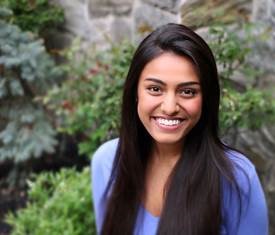 Congratulations to Jasmine Sharma for earning the top prize in the Theater's Project 2017 Young Playwrights Competition. Not only did Jasmine received a monetary prize but she also had the wonderful opportunity to watch her piece come to life as actors performed her play on stage on March 18th. 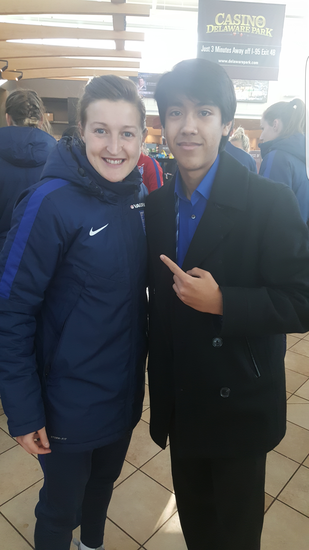 When returning home from the George Washington University Model UN conference at a rest stop in Delaware, the Model UN Team was able to meet England's Women's National Soccer Team. It was simply a coincidence that we arrived at the same time as the team who had just finished obtaining a strong victory against the U.S. National Women's Team on March 4th. World topics and world sports...seems like a good way to end a Model UN conference!

As for the conference the following students obtained awards: 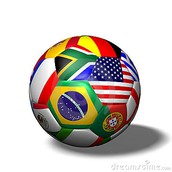 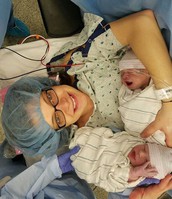 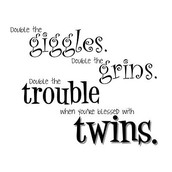 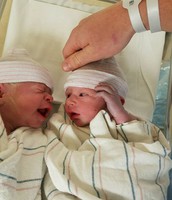 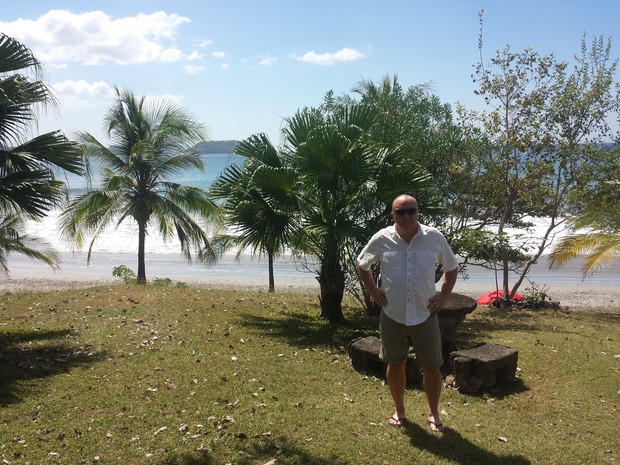 As you all know I retired October of 2015, that fall we went Zion and Bryce Canyons out west with our son, hiking everyday. It was spectacular. The following January we went to Costa Rica for the first time, traveling by car from San Jose, the capitol, to Arenal Volcano and then over to Monte Verde rainforest. We did a ton of hiking and bird watching, and got to see the rare Quetzl, amazingly beautiful. We drove south to the west coast and stayed at Manuel Antonio. It was fantastic, tropical jungles, beatufiul birds, great beaches and lots of monkeys.

In April of 2016 we spent a week in Cape Cod visiting family and then in June went out west to Colorado to visit family again and go camping and hiking in Rocky Mountain National Park, we planned that trip to coincide with the start of summer. Once again a lot of hiking and beautiful weather and views. We went to Cape Cod again in the fall and returned to Costa Rica this January, this time traveling to the northwest province of Costa Rica on the Pacific called Guanacaste, Beautiful beaches, great people and fantastic seafood and drinks. We started just west of Liberia and traveled south down the coast stoppping for a few days at several beaches, Playa Hermosa, Playa pan de Azucar and finally at Playa Grande. Playa Grande was one of the beaches where they shot the movie, Endless Summer, I now know why. We got in some boogie boarding and snorkeling along the way.

As for the future I am trying to get a Paris trip organized for late April to early May to coincide with my wifes birthday. It has been a dream of hers to see Paris and France. I already booked 5 days in the park at Grand Canyon this June so we can do some hiking and star gazing. We plan to drive with our son from Denver to Arches then Antelope Valley and end up at the GC to have some family time. My son is a good sport about traveling wIth his Mom and Dad.

All the time I am still tending to the garden, planning on starting broccoli seed today. After the past few days it feels as if winter has returned. I miss you guys...but not the daily grind of commuting. - Rich Wasek 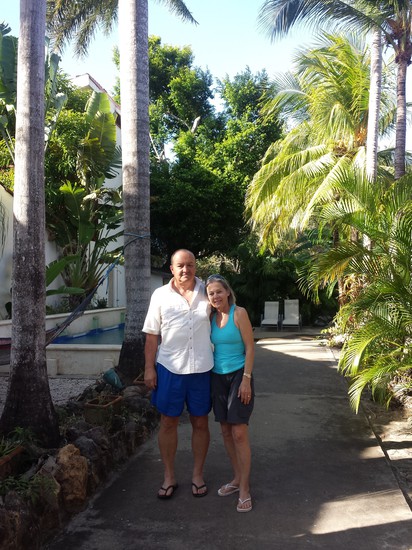 Career Day has been rescheduled for May 25th

200 Hackensack Avenue, Hackensack, NJ, United States rusdav@bergen.org 201-343-6000 btcs.org
Embed code is for website/blog and not email. To embed your newsletter in a Mass Notification System, click HERE to see how or reach out to support@smore.com
close