Get email updates from Liz:

The Byzantine Empire declined due to outside invaders, eroding tax base and the high cost of maintaining their territory.

In 1071, the beginning of the empire's decline started. The battle of Manzikert was fought between the Byzantine Empire and Seljug forces, a Turkish dynasty. The capture of Emperor Romanos IV Diogenes and devastating defeat of the Byzantine led to, their many casualties. These casualties were fairly heavy, with between 2000 to 8000 soldiers killed, and another 4000 captured. However, Turkish casualties are unknown, but probably less than 10 percent of their force. This definitely affected their military and soldiers strength. Not only did the battle of Manzikert affect the empire, but so did the Christians of the west. During the Fourth Crusade, Crusaders invaded the city of Constantinople, capitol of the Byzantine empire. This was one of the key points that led to the downfall. Several Crusaders managed to invade the city walls. eventually they were able to knock holes into the walls and were soon able to crawl through. The westerners also created "The Great Fire" which burnt for 3 days. This fire destroyed a large part of Constantinople and left hundreds homeless. This attacked showed the cities vulnerability and its glory was then taking away. 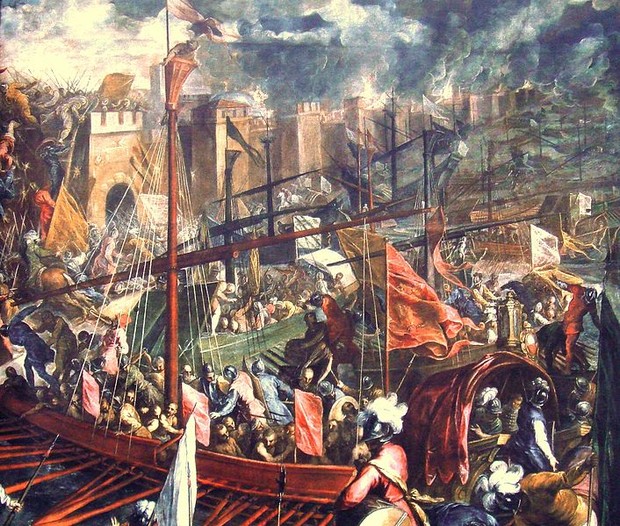 Early in the empire, the majority of the people were free men. These men were offered land in return for military service. However they also paid taxes, this was very good for the empire causing the empire to be able to create a large military at their command. But, once the upper class members began taking land as their own, this all changed. Being placed to the land and showing obedience to the landowners, rather than the empire, the poor classes were put into a state of slavery. As this was happening, the government was claiming and taking over large areas of land as their own with their military. Not only are they conquering lands, but the government hires mercenaries as well. But because the peasant class was now not giving taxes the empire, the empires source of money was slowly depleting.

While Byzantine military was maintaining more land, they were still lacking taxes from the people to pay for their expanding empire and expensive military. Just like the Roman empire, the Byzantine empire had trouble controlling and preserving their land once they had built and conquered a large amount of land. The empire and military was increasing its size, but because of the serfdom that was going on within the empires people, the empire wasn't the support it needed. By now the Empire was definitely lacking money. Unfortunately, as this depleting support of money from the empire's people, they also had very expensive mercenaries to help their military. Overall, their want for a bigger empire and absence of money conflicted and caused their empire to struggle even more than it already was.