This speech was given by Susan B. Anthony after her arrest for casting an illegal vote in the presidential election of 1872.

In the 1800s, women in the United States had few legal rights and did not have the right to vote.
Throughout Susan B. Anthony's "Women's Right to Vote," it is evident that Susan wants women to have the same rights as men did.
"And it is a downright mockery to talk to women of their enjoyment of the blessings of liberty while they are denied the use of the only means of securing them provided by this democratic-republican government - the ballot.
"It shall be my work this evening to prove to you that in thus voting, I not only committed no crime, but, instead, simply exercised my citizen's rights, guaranteed to me and all United States citizens by the National Constitution, beyond the power of any state to deny."
"Are women persons? And I hardly believe any of our opponents will have the hardihood to say they are not. Being persons, then, women are citizens; and no state has a right to make any law, or to enforce any old law, that shall abridge their privileges or immunities. Hence, every discrimination against women in the constitutions and laws of the several states is today null and void, precisely as is every one against Negroes." 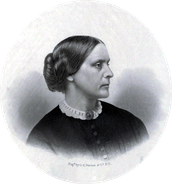 Susan B. Anthony Amendment became the 19th Amendment to the U.S Constitution.