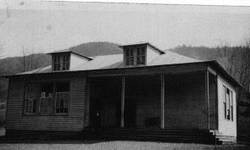 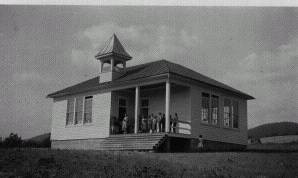 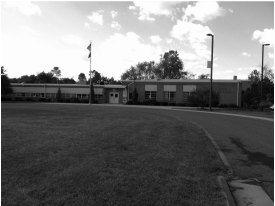 The Fulks Run School was located near Fulks Run on Dry River and is indicated as Plains District School #27 on the 1885 atlas of Rockingham County. The date of construction of this one-room school is unknown. In 1914, the one-room school was replaced by a two-room school located further south on the Plains-Linville District line. This land was conveyed to the Linville and Plains District School Boards from E. Hoover and wife by a deed dated July 6, 1914. From 1914 through 1922, the Linville and Plains District Board hired teachers in alternate years. The school continued as a one-teacher school through the 1919-20 school session when it became a two-teacher school. In 1941, it again became a one-teacher school until it closed at the end of the 1951-52 school session. Once the school closed the students were transported to Broadway Elementary School.

The Dovesville school was located at Dovesville in northwestern Rockingham County. The earliest one-room school was located at Wittig’s Store and is identified as School #30 in the 1885 atlas of Rockingham County. The exact date of construction of this school is unknown. In 1911, the Plains District school trustees decided to consolidate the Dovesville school and the neighboring Souder school into a two-room school. On June 23, 1911, the Plains District school trustees sent a letter to S. Loy Moyers, the teacher at the Dovesville school, and asked if he could secure free land for a new two-room schoolhouse. The land was obtained from George W. Whetzel and Charles Souder, and the school was constructed and ready for occupancy by the fall of 1913. In 1928, the growth of student population made it necessary to add a third room to the Dovesville school. An agreement was made between that Rockingham County School Board that the patrons would pay $500 of the cost and the school board would pay the remaining $725. In 1935, the name of the Dovesville school was changed to the Bergton school to reflect the post office name change. Apparently there had been confusion with another post office named Covesville, and the new name was chosen for the post office and community. The Bergton school continued to operate until 1958 when it was replaced by a new seven-room brick school. Until 1952, the Bergton school offered a two-year high school program. The eighth grade remained at Bergton for the 1952-1953 school session and then Bergton became a 1-7 school. The Bergton school was closed in 1987.

The land was purchased from Mrs. Eunice Thomas and Mrs. Margaret Custer. The building first opened with 238 pupils in grades one through seven. The original staff consisted of six teachers, one teaching principal, one secretary, two cooks, and a part-time custodian. The staff now consists of thirteen classroom teachers, one P. E. teacher, one Librarian, one resource teacher, assistants, a gifted resource teacher, three cafeteria workers, a cafeteria manager, a guidance counselor, a full-time and a part-time custodian, four bus drivers, one bookkeeper, a part-time technology assistant, two cafeteria monitors and a principal.

Fulks Run Elementary School now provides an educational program from Pre-Kindergarten through grade five. The faculty and staff attempt to plan, coordinate and implement all learning activities to best meet the needs of each child. The curriculum is comprised of any and all experience that the school provides for the child and is carefully selected to expose the student to a varied program that will enable him to be a well-rounded citizen of his community.

* Information and graphics from RCPS Website
Back to FRES Home
Embed code is for website/blog and not email. To embed your newsletter in a Mass Notification System, click HERE to see how or reach out to support@smore.com
close
Powered by Smore
Powered by Smore