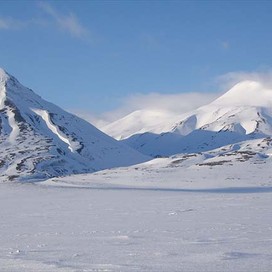 Get email updates from Boop:

The Man Who Died For Confederation

The Man Who Died For Confederation

Thomas D'Arcy McGee was born on April 13th, 1825 in Ireland. Despite being a Father of Confederation, McGee spent most of his early life outside of Canada. When he was 17, he moved to the US and spent the next while editing newspapers. He later moved back to Ireland, then in 1858 he went to Montreal and began a newspaper. As time progressed, he became more active in politics, believing in a united Canada while supporting Irish ideas.

Along with his involvement in Canadian politics, Thomas D'Arcy McGee was very active with literature. He read lots as well as published many poems and book on Irish history. Thomas D'Arcy McGee also worked along with other prominent Fathers of Confederation such as George Brown, John A. MacDonald, and George-Etienne Cartier. Though having many Irish supporters, he had Irish enemies. Many did not support McGee's ideas, but he still spoke hid mind against the disapproval of his own people. 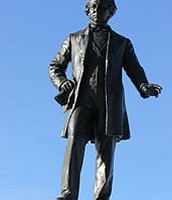 There is a statue of Thomas D'Arcy McGee on Parliament Hill in Ottawa to this date.

Thomas D'Arcy McGee was born in Ireland, and had a strong Irish influence. This led him to be a strong ambassador for many Irish people, but also made him some enemies. Some thought he was betraying his people by becoming so entwined with Canada and it's politics. 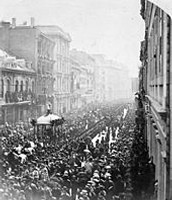 On April 7th, 1868, Thomas D'Arcy McGee was assassinated outside of his boarding house after a parliamentary debate. His funeral was held in Montreal, with an estimated crowd of 80,000.
Learn More About McGee