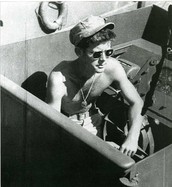 Rose Fitzgerald Kennedy would have nine children, four boys and five girls. Joe Kennedy (John's oldest brother) seemed to have all his priorities straight while John would slack off in school and get average grades. John would attend Harvard in 1936 where Joe was already a student. John's father at the time was over in England attending to some business and would write the boys, this inspired John to write his thesis on why Great Britain was unprepared for an attack by Germany which was published as a book in 1940 named Why England Slept. Both Joe and John joined the navy, Joe was a flyer sent to Europe while John was made Lieutenant and assigned to the South Pacific as commander of a patrol torpedo boat. On the night of August 2, 1943 John's boat was smashed through by a Japanese boat killing two of his crew men, one of his crew men suffered serious burns to his face and hands and was ready to give up. In the darkness John grabbed him and the surviving crew men and swam a couple miles to an island off shore. Six days later two native islanders found them and went for help with a message that John had written on a coconut. The next day they were rescued, a year later Joe would die due to his plane blowing up in a dangerous mission in Europe. When John returned home he was rewarded with the Navy and Marine Corps Medal for his leadership and courage. Soon after being elected senator, John F. Kennedy, at 36 years of age, married 24 year-old Jacqueline Bouvier, a writer with the Washington Times-Herald. As the years went on, John F. Kennedy, a Democrat, served three terms (six years) in the House of Representatives, and in 1952 he was elected to the US Senate.

Joseph P. Kennedy, Sr., is shown surrounded by his family. 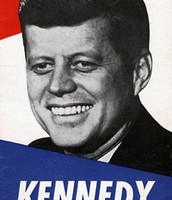 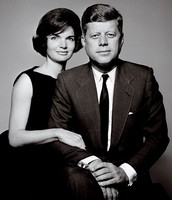 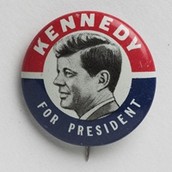 John F. Kennedy was becoming a popular politician. In 1956 he was almost picked to run for vice president. Kennedy nonetheless decided that he would run for president in the next election. He began working very long hours and traveling all around the United States on weekends. On July 13, 1960 the Democratic party nominated him as its candidate for president. Kennedy asked Lyndon B. Johnson, a senator from Texas, to run with him as vice president. Kennedy challenged the vice president to a series of televised debates. Many in the Nixon camp, including President Eisenhower, urged the vice president to reject the debate proposal and deny Kennedy invaluable national exposure. But Nixon confidently agreed to share a platform with his rival on nationwide television. In 1950, only 11 percent of American homes had television; by 1960, the number had jumped to 88 percent. An estimated seventy million Americans, about two-thirds of the electorate, watched the first debate on September 26th. Kennedy had met the day before with the producer to discuss the design of the set and the placement of the cameras. Nixon, just out of the hospital after a painful knee injury, did not take advantage of this opportunity. Kennedy wore a blue suit and shirt to cut down on glare and appeared sharply focused against the gray studio background. Nixon wore a gray suit and seemed to blend into the set. Most importantly, JFK spoke directly to the cameras and the national audience. Nixon, in traditional debating style, appeared to be responding to Kennedy. Most Americans watching the debates felt that Kennedy had won. (Most radio listeners seemed to give the edge to Nixon.) Kennedy faced many challenges when running for president such as the fact that he is very young and inexperienced, his religious beliefs, and the way he would deal with Civil Rights going on at the time. On November 8, 1960, John F. Kennedy was elected president in one of the closest elections in U.S. history. In the popular vote, his margin over Nixon was 118,550 out of a total of nearly 69 million votes cast. His success in many urban and industrial states gave him a clear majority of 303 to 219 in the electoral vote. John Fitzgerald Kennedy was the youngest man ever elected president, the only Catholic, and the first president born in the twentieth century. 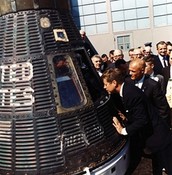 The president had many worries, one of the things he worried about most was the possibility of nuclear war between the United States and the Soviet Union. He knew that if there was a war, millions of people would die. Since World War II, there had been a lot of anger and suspicion between the two countries but never any shooting between Soviet and American troops. This 'Cold War', which was unlike any other war the world had seen, was really a struggle between the Soviet Union's communist system of government and the United States' democratic system. Because they distrusted each other, both countries spent enormous amounts of money building nuclear weapons. He wanted to make sure that he made the best decisions for his country. "I am asking each of you to be new pioneers in that New Frontier," he said. The New Frontier was not a place but a way of thinking and acting. President Kennedy wanted the United States to move forward into the future with new discoveries in science and improvements in education, employment and other fields. He wanted democracy and freedom for the whole world. Kennedy's New Frontier was called Camelot, like King Arthur & Guinevere, a dynamic young leader and he bride led the nation. The White House was their home, America their kingdom. President Kennedy was also eager for the United States to lead the way in exploring space. The Soviet Union was ahead of the United States in its space program and President Kennedy was determined to catch up. He said, "No nation which expects to be the leader of other nations can expect to stay behind in this race for space." Kennedy was the first president to ask Congress to approve more than 22 billion dollars for Project Apollo, which had the goal of landing an American man on the moon before the end of the decade. All of this would be possible through NASA (The National Aeronautics and Space Administration is the agency of The United States Federal Government responsible for the civilian space program as well as aeronautics and aerospace research). President Kennedy had to deal with many serious problems here in the United States. The biggest problem of all was racial discrimination. The US Supreme Court had ruled in 1954 that segregation in public schools would no longer be permitted. Black and white children, the decision mandated, should go to school together. This was now the law of the land. However, there were many schools, especially in southern states, that did not obey this law. There was also racial segregation on buses, in restaurants, movie theaters, and other public places. Thousands of Americans joined together, people of all races and backgrounds, to protest peacefully this injustice. By June 11, 1963, President Kennedy decided that the time had come to take stronger action to help the civil rights struggle. He proposed a new Civil Rights bill to the Congress, and he went on television asking Americans to end racism. "One hundred years of delay have passed since President Lincoln freed the slaves, yet their heirs, their grandsons, are not fully free," he said. "This Nation was founded by men of many nations and backgrounds…[and] on the principle that all men are created equal." President Kennedy made it clear that all Americans, regardless of their skin color, should enjoy a good and happy life in the United States.

JFK and many other high powered people speak out against Civil Rights. 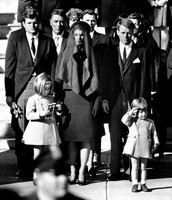 The Death of The President 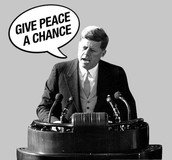 The Legacy of JFK

Kennedy had transformed himself from a son of Boston into a citizen of the world.

On November 21, 1963, President Kennedy flew to Texas to give several political speeches. The next day, as his car drove slowly past cheering crowds in Dallas, shots rang out. Kennedy was seriously wounded and died a short time later. Alongside JFK was Texas Gov. John Connally who was shot and wounded as well. Lyndon B. Johnson takes oath of office at Airforce 1 in Texas. Within a few hours of the shooting, police arrested Lee Harvey Oswald and charged him with the murder. On November 24, another man, Jack Ruby, shot and killed Oswald, thus silencing the only person who could have offered more information about this tragic event. Earl Warren was the Chief Justice of The Supreme Court and was the one who took on all of Kennedy's cases regarding his assassination. The Warren Commission was organized to investigate the assassination and to clarify the many questions which remained. President Kennedy's death caused enormous sadness and grief among all Americans. Most people still remember exactly where they were and what they were doing when they heard the news. Hundreds of thousands of people gathered in Washington for the President's funeral, and millions throughout the world watched it on television. As the years have gone by and other presidents have written their chapters in history, John Kennedy's brief time in office stands out in people's memories for his leadership, personality, and accomplishments. Many respect his coolness when faced with difficult decisions--like what to do about Soviet missiles in Cuba in 1962. Others admire his ability to inspire people with his eloquent speeches. Still others think his compassion and his willingness to fight for new government programs to help the poor, the elderly and the ill were most important. Like all leaders, John Kennedy made mistakes, but he was always optimistic about the future. He believed that people could solve their common problems if they put their country's interests first and worked together.