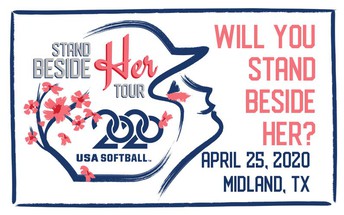 The 2020 USA Softball Olympic team will be in Midland TX on April 24, 2020 for a 'Meet & Greet' dinner. This will allow you a time to meet the players, have dinner with them, ask questions, and take some photos.

The Olympic team players will be sitting at tables with the guests. This dinner is designed as a time for you to talk with players, ask them questions and take pictures. You may ask for autographs, but this will NOT be a formal autograph session. Please be considerate of the players and their time. Autograph session will be available after the exhibition game on saturday and the camp on Sunday.

**If purchasing individual seating, you will be assigned a table. No exceptions or special requests will be made. If you wish to sit with specific individuals, you MUST order tickets together.

OKLAHOMA CITY — The 2020 USA Softball Women’s National Team (WNT) will be in Midland, Texas at Security Bank Ballpark on April 25, 2020 as the “Stand Beside Her” tour rolls through the United States in preparation for the Tokyo 2020 Olympic Games. Home of the Midland RockHounds, a minor league baseball Double-A affiliate of the Oakland Athletics, Midland will host the Red, White and Blue as they look to capture the Gold Medal in Tokyo where the sport of softball returns to the Olympic program for the first time since 2008.

“I’m excited to have a tour stop in Midland, Texas,” said 2020 WNT member Kelsey Stewart. “We have had a few games in Texas before and the amount of hospitality, both from our hosts and our fans, is unbelievable. No matter the weather, the fans in Texas show up in the masses and we are excited to have the opportunity to play in from of them as we are gearing up for the Olympics.”

In Midland, fans will have the opportunity to watch Team USA compete against Lubbock Christian on April 25 in a doubleheader beginning at 6 p.m. CT. Game two will take place approximately 35 minutes after the conclusion of game one.

Played at Security Bank Ballpark (5514 Champions Drive, Midland, Texas, 79706), individual tickets for the games will be on sale beginning February 1, 2020 at https://bit.ly/2tQ1iGM Reserved tickets are available while group tickets are available for purchase now by calling the RockHounds Front Office at 432-520-2255.

“We’re honored to bring the 2020 U.S. Olympic Softball Team to Midland, Texas,” said USA Softball of Texas Commissioner and President-Elect, Rodney Cobb. “We hope that everyone who comes will be inspired by these elite athletes who are exceptional role models both on and off the field.”

With the return of softball to the Tokyo 2020 Olympic Games program, the “Stand Beside Her” tour provides much-needed training and competition for the 2020 WNT in their preparation for the Olympic Games while also giving fans a chance to watch the Red, White and Blue in person. Olympic competition will start July 22, 2020 with the Gold Medal Game being played on July 28.

The “Stand Beside Her” tour evokes a powerful message of unity aimed to inspire communities to stand beside HER – the members of the WNT, America and the future generation of female athletes.

“The Midland RockHounds are once again excited to host the USA Olympic Softball team, said Midland RockHounds General Manager, Monty Hoppel. “We hosted the game in 2008 before the team played in Beijing and had one of the top three crowds of the tour. We expect another big crowd to cheer on the team.”

Get Directions
Embed code is for website/blog and not email. To embed your newsletter in a Mass Notification System, click HERE to see how or reach out to support@smore.com
close