Asia, the largest continent, holding 4,140,336,501 as of 2012. Many hisorical events and people lead back to Asia. Asia is the worlds largest and most populous continent, located primarily in the eastern and northern hemispheres. It covers 8.7% of the Earths total surface area and comprises 30% of its land area. Wikipedia.com  Area: 17.21 million sq miles (44.58 million km²) The asian history leads us through many generations and fierce world conquerors. Some include but are not limited to:people of China, travel china says: Confucius or Kong QiuSun TzuQin Shi Huang, Chinas First EmperorKublai Khan of YuanZhu Di, Yongle EmperorAdmiral Zheng HeDowager Empress Cixi of QingSun Yat-senMao ZedongHu Jintao. People of Japan:Hideyoshi Toyotomi, Japans Reunifier Emperor Akihito of JapanJapan& Samurai Warriors History of the Ninja Samurai Samurai Women of Japan. Some of the main conquerors and warriors of our world lead back to the fierce and powerful world of many fighters, Japan. Two of the main countries in Asia are Japan and China. These two countries are in Asia and have many similarites. Chinesse tradition influenced japan in a major result. That is why there are so many. They also have some diffrences. China and Japan both are major players in our worlds history.

China, one of the countries that can boast of an ancient civilization, has a long and mysterious history - almost 5,000 years of it! Like most other great civilizations of the world, China can trace her culture back to a blend of small original tribes which have expanded till they became the great country we have today."History of China." Travel Cina. travelchina.com, n.d. Web. 22 Apr 2013. <http://www.travelchinaguide.com/intro/history/>.   First emperor of China was Qin Shihuangde. he ruled for many years and when his time of passing, he created a clay army to protect his bariel ground. As u look in the picture below u will see the clay army. heres some vocabulary for China.: Pictographs were Chinas writting system. Buddahism brought fom India along the slik road Taoism and Confucianism. Most of the most famouse architecture are the clay army, which is what Qin put around his bariel. One of the most famouse peices of architecture in the world is the Great Wall of China. Dynasties= ruling familes. The silk road= 400 mile long network of trade routes from China to the Mediterranean Sea. Used rivers to travel and trade. Also there is a picture of the silk road trade route. 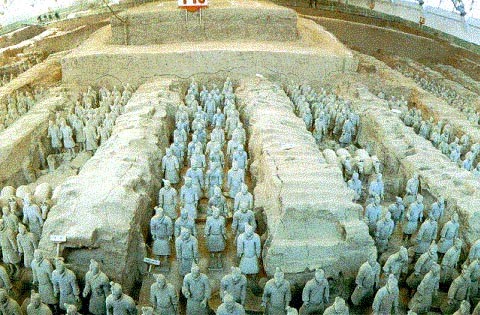 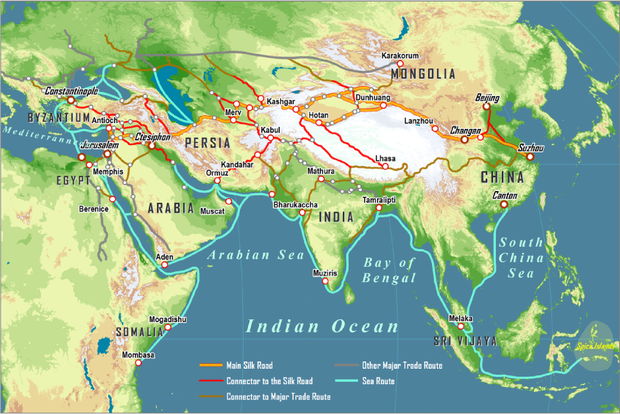 Japan is an island nation in East Asia. Located in the Pacific Ocean, it lies to the east of the Sea of Japan, China, North Korea, South Korea and Russia, stretching from the Sea of Okhotsk in the north to the East China Sea and Taiwan in the south Capital: Tokyo  Prime minister: Shinzō Abe  Official language: Japanese Language  Government: Unitary state, Parliamentary system, Constitutional monarchy  Population: 127,817,277 (2011) Gross domestic product: 5.867 trillion USD (2011) Kimono is a type of dress most women in japan wear. Its a traditional gown wore in japan. You will see an example in the picture below. 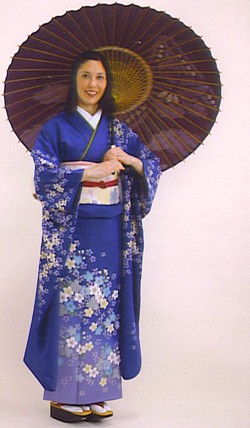 Similarites between China and Japan

Similarites include: Both found in Asia one of the largest land masses in the world. The Chinese writing system was introduced in Japan in the beginning of the fifth century, as, at that time, the Japanese did not have a written language. China has influenced its culter on Japan and thats why there are many trates the same between the two. These trates include but are not limited to Goverment System, religion, writing systems, city planning, and education.

www.ehow.com
Similarities Between Japanese & Chinese Culture. The Chinese civilization is one of the oldest in the world, along with the Maya in Central America and the Egyptians in Africa, spanning more than 4,000 years of history. On the other hand, the Japanese state was only formed in the eighth century. The Chinese influenced the Japanese in many ways,...