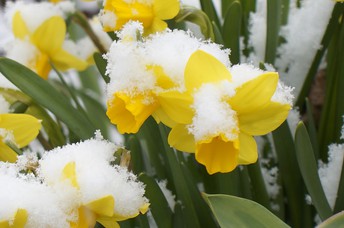 Happy Spring! March is the beginning of more seasonable weather and we appreciate everyone's patience with this year's closures and delayed openings due to snow and ice. When bad weather approaches, we monitor the weather very closely and communicate frequently with the Long Hill Department of Public Works, the Long Hill Police Department, our buildings and grounds, the Long Hill and Morris County Office of Emergency Management and other schools in the area and in the county. Often times, conversations are taking place behind the scenes at 4:30 a.m. to ensure the safety of our students and staff and to also measure the impact that a delay or closing will have on our community. We currently have one more additional snow day remaining in the school calendar and hope that we have seen the last of bad weather.

March is also designated as STEM month by the New Jersey STEM Pathways Network and the Research and Development Council of New Jersey. Our STEAM students and staff have been tinkering and using Science, Technology, Engineering, Art, and Mathematics in various ways and we take great pride in showcasing their work in this newsletter. Our district has also made great strides with Future Ready district initiatives this year. Committees of teachers and administrators have met frequently to identify strengths in our instructional programming and areas where we can further incorporate technology to strengthen teaching and learning. The committees of teachers and administrators have been working diligently to meet the requirements for Future Ready and to ensure that our district receives state and national recognition at the Bronze level. We are in the process of submitting the necessary documentation for initial dialogue and feedback from the New Jersey Future Ready coalition.

Lastly, I want to thank the parents, teachers, and administrators of the Superintendent's Advisory Group. We met recently and have discussed ways of improving our district. A discussion was had on important wellness initiatives for our students including nutrition and the reduction of sweets and unhealthy food items in the classroom. New district initiatives will be coming out soon to ensure the safety and wellness of all of our students. Information concerning the advisory group can be found here. Thank you for your continued support of our students and staff.

March is STEAM month - What have we been up to?

Below is a short video on what our students have been doing in the STEAM classroom at Millington school. Enjoy!
https://youtu.be/y7T4oYpRIOo

On March 12, 2019, 20 8th graders were selected to participate in a STEAM workshop at Jenkinson's Aquarium with Mrs. Barth and Mrs. Stepanian. Students learned about buoyancy and then used their engineering and design skills to build an ROV (remote operated vehicle) for water sampling. 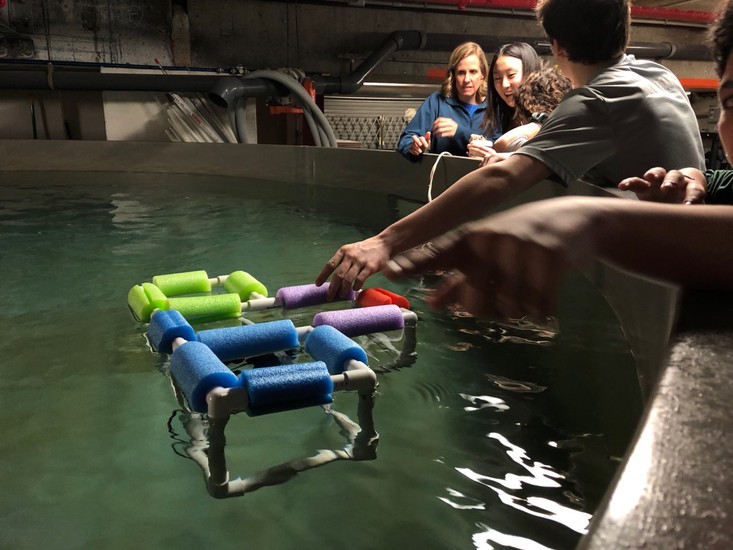 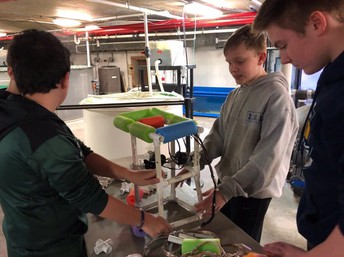 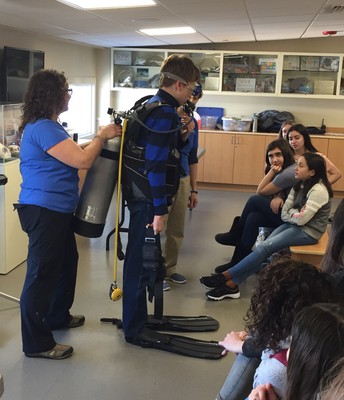 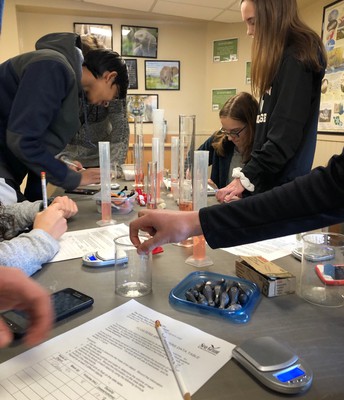 Students at Gillette School have been thoroughly engaged in STEAM activities this month and the importance of recycling. Kindergarteners created animals and insects from recycled egg cartons to tie in with Eric Carle books, while First graders made items from recycled newspapers and magazines. Students also participated in coding activities, creating a flag using lego pieces and participating in math scavenger hunts in the classroom.

Students in Mrs. Holzinger's and Ms. Sinott's classes also participated in the the UNLESS project, a science and STEAM based project sponsored by the Philadelphia Zoo. Students were asked to use recyclable materials to create a new product that would help reduce waste. Students in both classes were first asked to come up with a blueprint and a description of their project and invention idea. The project was then narrowed down to four finalists who had to make a prototype of their invention. The prototypes were then narrowed down to one single idea which evolved in to making an herb garden out of k-cups. Both classes will now work until the end of the year to perfect their invention. Once the invention is finalized, it will be sold to parents in the community. We anxiously await the finalized product. 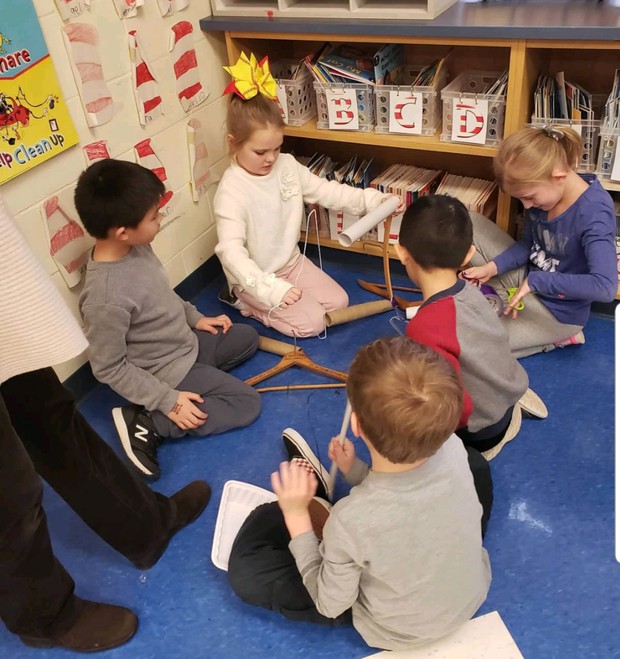 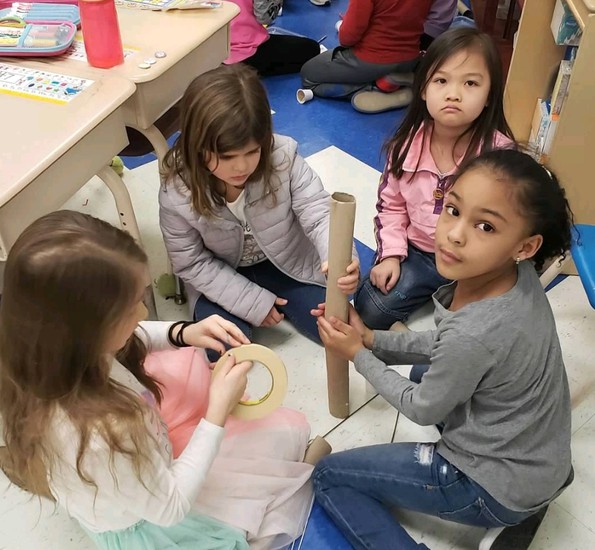 On March 3rd, the Long Hill FORCE Robotics teams proudly hosted the 2019 New Jersey State Championship at our very own Central Middle School. Congratulations to our students who all worked incredibly hard! Below is information regarding the various teams: 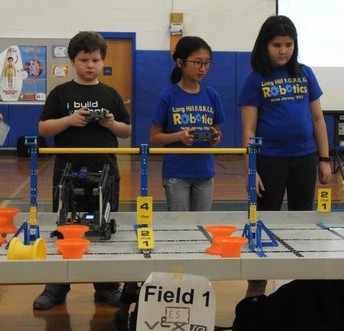 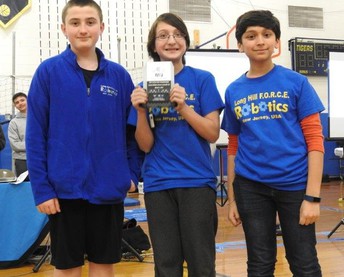 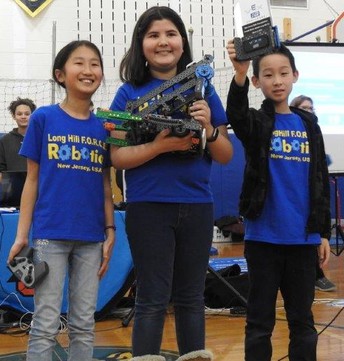 Playing for a packed house on the WHRHS basketball court, the Long Hill Master Minds took on the Harlem Wizards on March 15, 2019 in an amazing showdown of athletic prowess and total silliness.

The evening’s festivities began an hour before the game, as students, families, and friends filled the gymnasium to support the Long Hill teachers. Dancing to music, chatting in the stands, and watching the teams warm up, the energy in the stands was electrifying.

When the game began, the Master Minds showed their skills extend far beyond the classroom. When the Wizards challenged Mr. Rideout to a dance contest, he flossed expertly at center court, and then he followed his dancing up by scoring two baskets in the first quarter. Ms. Tremarco led a tickle defense against the Wizards and demonstrated skillful teamwork, passing to Ms. Spinello who moved the Master Minds to 6 points on the scoreboard. Mr. Manto had nothing but net, swooshing a basket from the three pointer line. Mrs. Sepe and Mrs. Clark followed up with another basket. In the third quarter, the Wizards challenged the Master Minds to hold the lead. Mrs. Franklin scored two baskets, and was unstoppable until her daughter, playing for the Wizards, knocked the ball from her hands. The crowd went wild. The teams battled back and forth as Mr. Nestler scored basket after basket, and Mrs. Andreski, Mr. Salzer, Ms. Sinnott, and Mrs. Milito each scored a basket, resulting screaming cheers from their fans. At the end of the third quarter, the Master Minds had taken the lead, 54-53.

The fourth quarter was filled with cheering, dancing and basketball mixed with games to involve the crowd. The evening ended with all the children in attendance dancing center court with the Wizards and the Master Minds and confetti canyons sprinkling rainbow streamers among the crowd.

All in attendance were so proud of our Long Hill faculty, who came out to the courts to bring huge smiles to their students Friday night. They were the stars of the show and made this an unforgettable event for all in attendance.

A special thank you to the PTO for organizing this event and for the parent volunteers who worked throughout the night to help make this night a great success.

The Gillette School first grade World Dance Celebration Residency concluded with a fabulous performance by first grade students. Students excitedly performed for their families and classmates dances from Australia, China, Hungary, Kenya and the United States (Hawaii). A special thank you to the LHT PTO Cultural Arts Committee for sponsoring this important program for our students. Mrs. Atkins spent two weeks with the Gillette First graders directing and choreographing a multi-cultural folk dance program to promote better understanding of cultures around the world.

In Library, 3rd-grade students explored the form of poetry and gained knowledge of poetic terminology. This exploration included learning about the lives of famous African American poets, Langston Hughes, and Maya Angelou. 5th Grade students increased their understanding of biographies by creating a “Who Was…” poster of notable African Americans. This involved research, summarizing, and a creative component of visually depicting that person.

2nd Grade students discovered the secret meaning behind the African American Code Song “Follow the Drinking Gourd” and how it helped enslaved African gain their freedom. The life and music of Duke Ellington was the focus during 3rd Grade music classes. 4th Grade students learned about the historic photo A Great Day in Harlem by using their Chromebooks to research the lives of the jazz musicians in the photo. 5th Grade students were introduced to ragtime music and the King of Ragtime, Scott Joplin. Student work from Art, Library, and Music is displayed in the Specials Wing for students of all grades to stop by and visit. 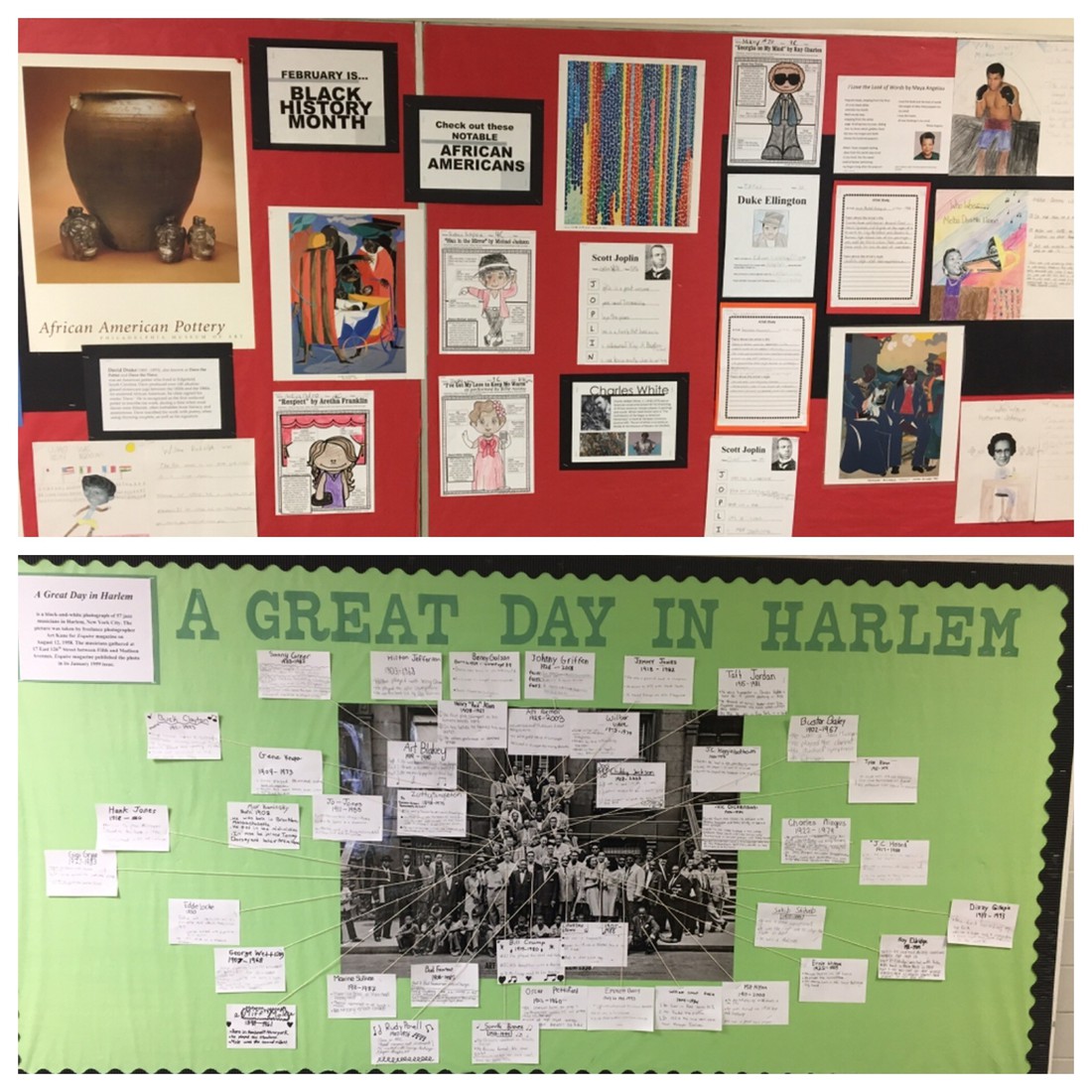 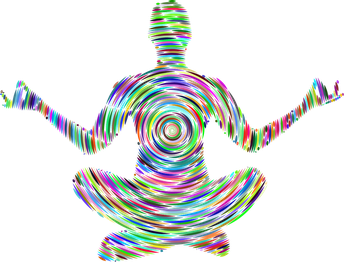 On Friday March 15th, Central Middle School piloted multiple sessions of mindfulness activities. These sessions took place during student guide periods. These were organized as a direct result of positive feedback students shared after participating in a Choose Love Morning Meeting Session called the “Mindful Minute”. In building on Choose Love’s positive message, the sessions were designed to help strengthen student’s self-esteem and self-awareness. Although related to Choose Love the desire to hold these sessions was student driven and complete with great success. We are going to continue these activities and look for opportunities to expand them over time. 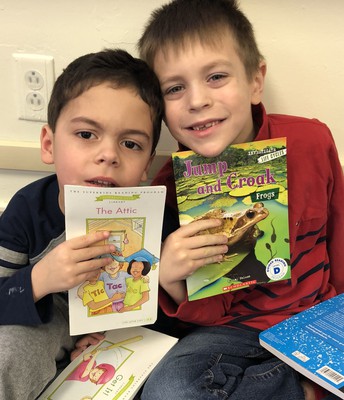 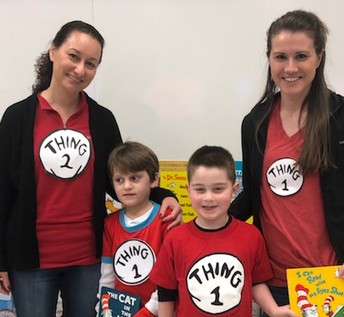 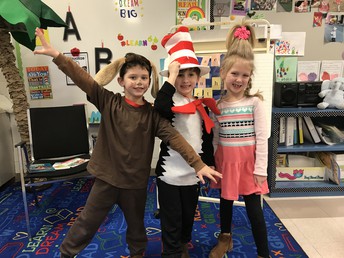 During the week of February 25th through March 1st, our district celebrated Read Across America, where volunteers shared their favorite stories with students throughout the week. Students took part in a week full of fun daily activities centered around a Dr. Seuss theme. The celebration culminated with a school-wide “Drop Everything and Read” time for students and staff to enjoy some quiet time to read a favorite book. 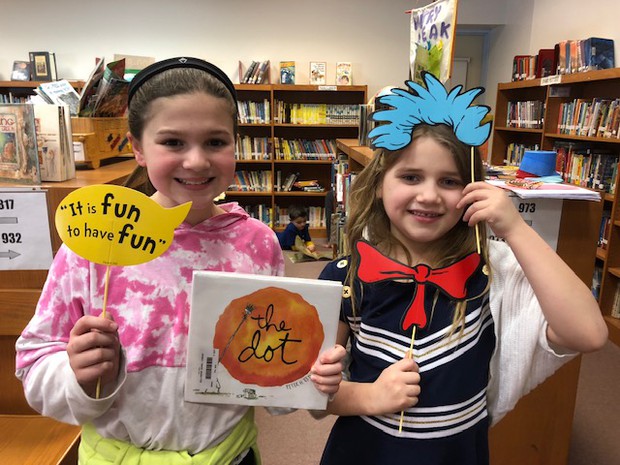 As part of Central Middle School's Read Across America celebration, the school recognized students who read more than 10 books during the school year. Seventh grader Sophia Ehlert broke the record at more than 140 books. 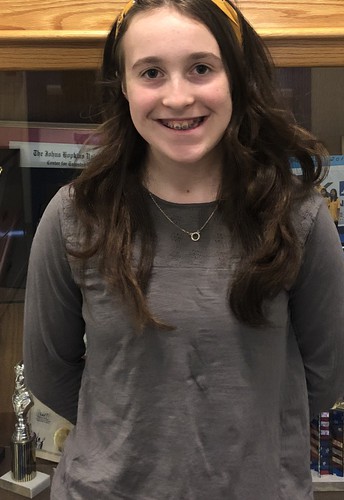 Scholastic Scopes Magazine recently identified Central Middle School Grade 7 student Sofia Fish as the winner of their "You Write Contest" contest. The essay contest challenged students to write an essay about a 13-year-old boy that saved the lives of 17 people and animals during Hurricane Harvey. Essays were judged on the following criteria: a clear central idea and supporting evidence, use of quotations, organization, and grammar. The contest entries were organized at Central Middle School by our language arts teacher Mrs. Vail. Sophia will also receive a $25 Visa gift card for winning the contest.

Students learn to read between the lines

English Language Learners in Mrs. Andersen's class learn to make inferences. Their silly glasses help them understand the concept of reading between the lines.

The kindergarten classes celebrated the 100th day of school with a day filled with centers and crafts. Here are some proud kindergarteners showing their 100th-day superhero glyph. 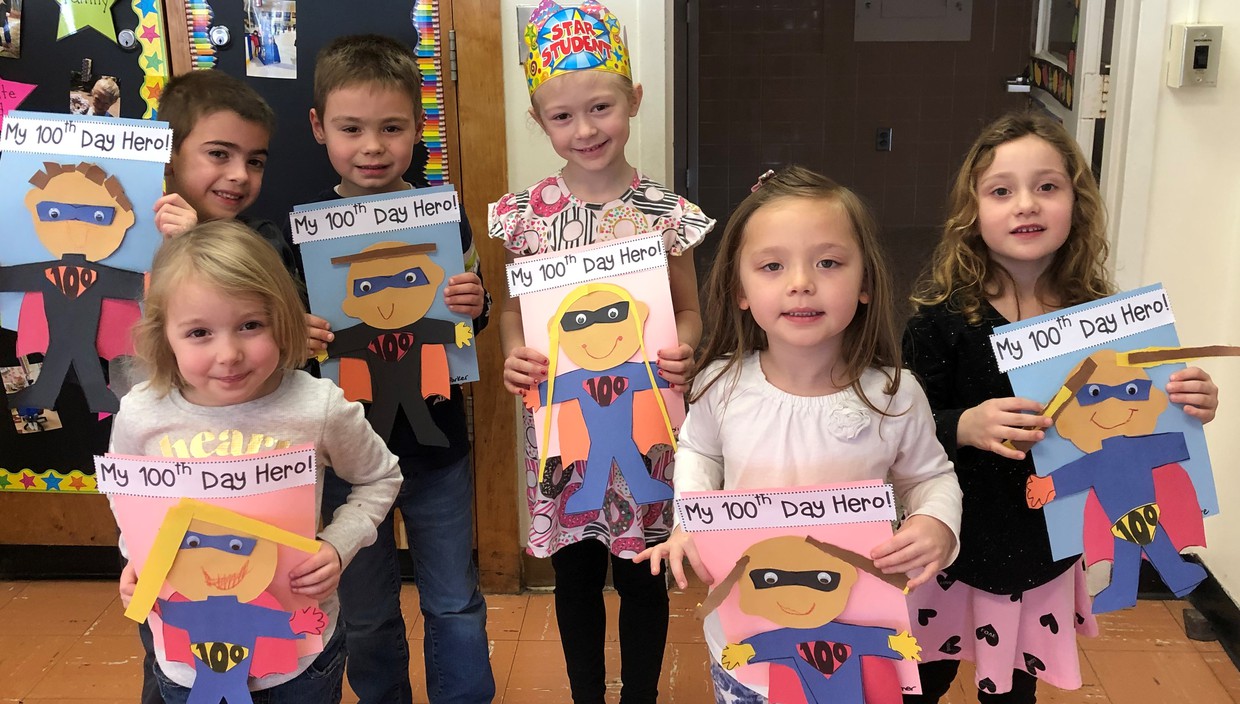 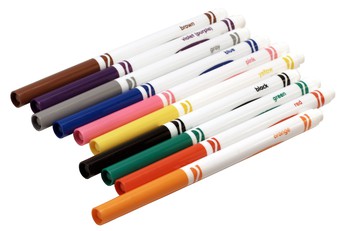 Gillette School's first grader, Sofie King, was inspired after seeing the Long Hill Library collecting old markers and sending them to Crayola's Color Cycle Program to get recycled into new markers. She then noticed how many markers we throw out at school, and wanted to make an impact by bringing the program to Gillette School. Sofie put a box at the front of the school for everyone to put their old markers in to be sent to Crayola. We are very proud of Sofie and are excited about her idea!