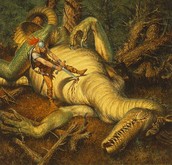 The story “Beowulf” depicts an extensive amount of loyalty between the characters. Individuals who show loyalty to their peers get appreciation and honor in return. By defeating Grendel and his mother, showing his loyalty, Beowulf earned the respect of Hrothgar and his kingdom. Exactly fifty years later in “The Last Battle”, he is shown loyalty in return by Wiglaf when fighting a dragon living in the tower above Beowulf’s kingdom.

“The Canterbury Tales” show loyalty as well. In the beginning, the narrator begins describing the Knight. Knights are known to be the most loyal subjects to their kingdoms. Showing loyalty to something or someone for so long can have a negative effect on an individual. This short story describes the Knight reminiscing his accomplishments for the king, but also dwelling on his loneliness. He drinks his meade filled with poison and dreams about his wishes until he passes peacefully.

Loyalty with a Price

Once upon a time in a far away land lived a King and his Queen. They had everything they could need with their magnificent stone castle up on the hill. The King made sure that his kingdom of Canterbury was safe from all harm. Down the hill in his little cottage, the knight sat at his table and chair observing all of the paintings the king’s artist had painted of his victories while drinking his meade. Alexandria to the left and Prussia to the right. His favorite ride though, was through Lithuania and the largest painting of them all that hung above his chair of honor. The noble knight, labeled for his chivalry, honesty, and generosity, thought about all the loyalty he had shown his king. He thought of how comfortable his life is with the fancier possessions he has because of the king. These objects would make any peasant happy and he should be grateful to the king! But even though he was comfortable, he was still missing the simplest request his heart wanted fulfilled. A fair maiden with hair as blonde as the straw for his horses and eyes as blue as the skies. She would be as loyal to him as if he was king, and he would be. He would be her king.The noble Knight, dreamt of every detail his lady would behold. The two lovers would ride their horses into the black night with only the light of the moon and the stars. The noble knight took his last breath.

This picture explains the scene also depicted in piece one, the last battle of Beowulf. Showing loyalty to a group of people will always impact at least one person with appreciation, enough to help you in a time of need. In the picture, the dragon is guarding his cave with the treasure. Wiglaf, Beowulf’s loyal soldier, fights the dragon after beowulf is brutally wounded. Soon later Beowulf dies with only few requests to show him honor.