In Reading Studio this month, the children continued to work on building their read-to-self stamina. The students began to practice monitoring for meaning through identifying when they had trouble decoding or understanding something as they read. Each student practiced recognizing when they did not understand with individual texts, and then had the opportunity to share their thinking with their classmates. Mentor texts used during crafting sessions were Black and White by David Macaulay, Wings by Christopher Myers and Stellaluna by Janell Cannon.

The class read the book The Name Jar by Yangsook Choi to kick off our Name Project. Each student then went home and had a discussion about why/how their name was chosen. Each student had the chance to share with the class what they found out and then compiled the information into a Penn Class Name Book.

The class continued reading books from the Flat Stanley series. Each child then created their own Flat Stanley, and mailed him off on an adventure to a place of their choosing. We look forward to their return in the winter.

In Writing Workshop, the children are working on building their independent writing stamina. After conferencing with the teacher to edit their pieces, children began the publishing process. Once finished illustrating their pieces, each child will read their story to the class in an Author’s Chair. The students began a new topic for narratives of special moments. They brainstormed lists in their notebooks and will begin drafting their narratives in November. The children are continuing to practice writing in complete sentences and appropriate use of capitalization and punctuation.

Integrity, encourage, confident and patient were our Words of the Week this month. Class meetings and Work Together Wednesday were related to the students' self-reflection and exploration with the meaning of each word. Work Together Wednesday was centered around comfort zones—comfort, stretch and panic. The children did self-reflection activities to explore their own feelings about scenarios and experiences. The class explored the various perspectives with a variety of scenarios and talked about how to pick others up through actions and words rather than putting them down.

In first grade math, students have been learning about number grids and ten frames. Students practice skip counting by 2s, 5s, and 10s daily. They practice number skills and strategies through using a variety of tools in games such as The Bunny Hop, Rolling for 50, and Ten Frame Top-It.

The second grade math group has been working on strengthening math fact skills by identifying patterns in addition facts for sums of 10, doubles and one more or less than a set of doubles, and adding 0,1, 9, and 10 to numbers. Students have been using dominoes, cards, calculators, and place value blocks during these activities.

As a special treat, some seventh and eighth grade helpers worked with small groups of students to get them started on math/science explorations to compare the mass and weight of objects using pan balances, spring scales, and lots of objects. Students experimented with measuring in grams, ounces, and pounds. Now we need one great big scale to put everyone onto at once to see what everyone weighs. 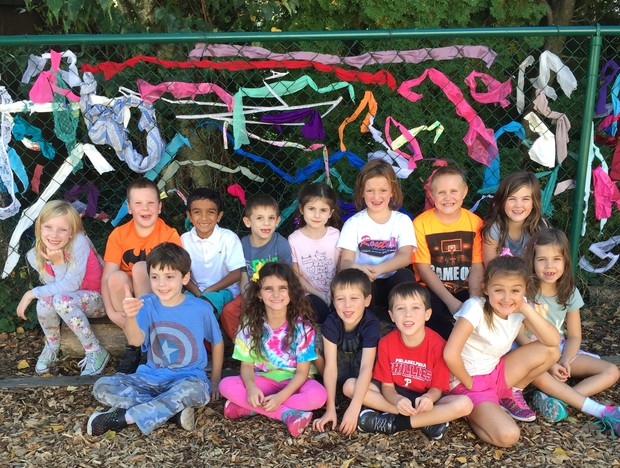 The students have enjoyed investigating playgrounds as a unit of study. Starting with our own UFS playground and then others—Panther Park, Smith Memorial Playground, Kids Castle and Abington Friends School Playground. They have focused on how things move through studying the various pieces of equipment. The students have begun to explore simple machines, forces and the concept of pneumatics. While visiting Smith Memorial Playground, the students noticed a weaving fence and then created one of our their own on the UFS Playground. Students recreated kids castle through block building. The students participated in a design challenge where they each had to design and create a model of something for the playground.

Thank you, Debbie, for our first Family Share! The children enjoyed making the spider craft. The Penn and Fox classes made soup to donate to the Quakertown Food Pantry. Penn Class Mystery Readers this month were Eileen, Kim, and Christiane.

The October reading strategy was questioning. Teacher Eileen used the mentor text Sweet Clara and the Freedom Quilt by Deborah Hopkinson and Pink and Say by Patricia Polacco. We talked about the difference between thin and thick questions. A thin question is one where the answer is right there. (Who? What? Where? When?) A thick question requires more thinking and searching. (Why do you think…? Would you…? How would you feel if…? What if…?).

The students continued to use the Writing Process while composing narratives. The class wrote an essay about why they would want to be a president. Students discussed about how they stood on various issues. (More technology, more recess, no homework, more playground equipment, etc.) They tried to convince other students why they would be the best candidate.

In 3rd grade math, we finished Chapter 1 and will be moving onto Chapter 2. Students will be covering adding and subtracting whole numbers and continue to challenge themselves with the Problem Solver Series.

In 4th grade math, we have completed our second unit, Using Numbers and Organizing Data. Students reviewed place value, multi-digit addition and subtraction, and learned about landmarks in data such as maximum, mode, and median. Students continue to practice problem solving strategies using Problem Solvers and played with various number puzzles in class. Our next unit will focus on multiplication and division facts, number stories, and number sentences.

The class finished reading The Kid Who Ran for President and are now moving forward with the election process. Students listed issues that could be addressed at UFS. (No homework, lockers for everyone, a cafeteria etc.) We talked about the electoral votes needed to win the presidency. We used a blank map of the United States and filled in the state’s name as well as its electoral votes. Students identified which states have a large number of electoral votes. We created electoral votes for our “mock” election based on each grade that will be voting.

We are continuing our study of chemistry. We learned about capillary action, how air molecules move, and effervescence. The students had fun trying to blow up a balloon inside a bottle. While they knew how to blow them up outside of the bottle, they had to determine the science behind blowing them up in the bottle. 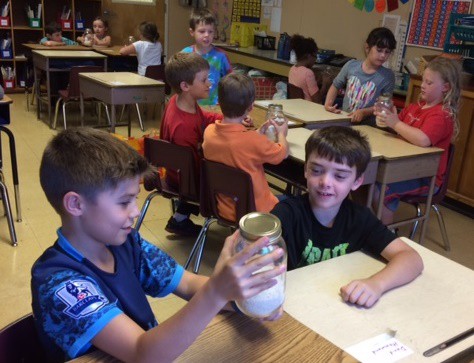