Get email updates from Miss:

Do you want to know about Oregon's famous wandering wolf OR-7? There is a wolf wandering around Oregon and is the leader of his own pack. He is known as OR-7. The pack is called The Rogue pack. They wandered thousands of miles from Oregon to to California and back he left his pack in northern Oregon. There name comes from their starting location in the Rouge River east of Medford. It is the first pack since 1990 that pack swam across the snake river. OR-7 found his mate last winter! His collar is still working but scientists hope to replace the collar and the collars of his mate or one of the pups in order to track them in May.

I got my information from Tween Tribune.

This is the wandering wolf from Oregon to California. 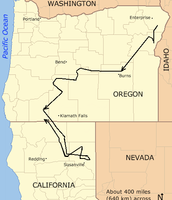 This is the map that shows where OR-7 traveled.

OR-7 needs his tracking collar to be replaced.