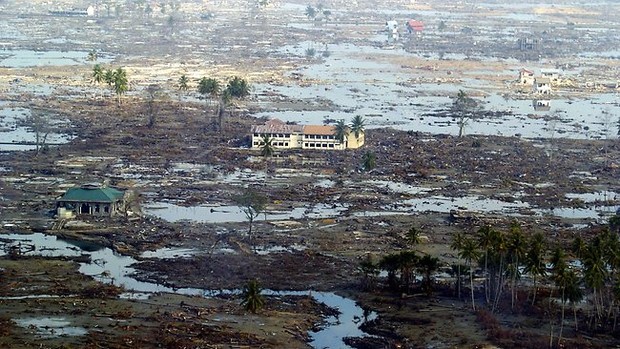 The Boxing Day tsunami started as an undersea earthquake and occurred at 00:58 on 26 December 2004. It had an epicentre off the west coast of Sumatra, Indonesia.

An undersea earthquake creates tidal waves because the earthquake changes the shape of the seafloor. The seafloor raises or lowers. Seawater is almost incompressible so the sea surface is also raised. However the sea surface needs to stay horizontal, so a lump of water will collapse under gravity, resulting in a series of waves. If the area affected by an earthquake is large, the tidal waves may be large too.

Drawback is caused by the moving of the tectonic plates. The water becomes displaced and the water recedes.

India, Australia, Malaysia and Indonesia have all implemented a 'Tsunami Warning System' of some sort.

The 'Tsunami Warning System' has the potential to be great because it can help give warning of a tsunami so that we can avoid the large number of deaths because of unpredicted tsunamis. However the system will be expensive and will take a long time to build. So we have to think about if it is worth spending so much money and time on something that won't be used extremely often.