Get email updates from kara:

"I see Queen Mab hath been with you. She is the fairies' midwife.."

"True, I talk of dreams, Which are the children of an idle brain, Begot of nothing but vain fantasy, Which is as thin of substance as the air and more inconstant than the wind, who woos..."

Listener of the Queen Mab speech; speech is directed towards Romeo.

Listener of the Queen Mab speech 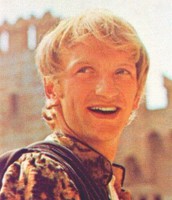 Speaker of the Queen Mab speech to Romeo and Benvolio. 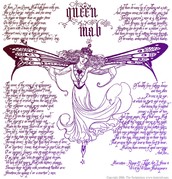 I see Queen Mab has paid you a visit

She is the fairy in charge of dreaming and she is

that belongs on the index finger of a politician.

Transported by her team of microscopic creatures

Across the proboscis of men well they rest

Her wagon spokes are long and slender

The cover is delicate and intricate

The harness is made out of the smallest spider web

The collars around their necks are made of thin moonbeams

The driver, a small gray mosquito

Not even the size of a parasite

Pulled from the finger of a lazy maid

Her chariot is and empty hazelnut

Made by a carpenter squirrel or an old worm

In this royal wagon she rides through every night

Though lovers' brains, and make them dream of love

Over courtiers' knees and they dream of curtsying

Over lawyers' fingers and immediately they dream of their fees

Over ladies' lips and they dream of kisses

Sometimes, over a courtiers' nose

Sometimes she tickles a priest's nose with a tithe-pig's tail

Changing his dream to a large donation

Sometimes over the neck of a soldier

And he dreams of cutting foreigners' throats

and of invasions, ambushes, and Spanish swords

And large quantities of liquor

Then soon he hears

He's scarred so he says a few prayers

And returns to his sleep. This is the same Queen Mab

That plaits horse's manes in the night

And tangles the dirty hairs

Which, if untangled, bring bad luck.

Mab is the hag that teaches young women how to bear a child.

This speech is included in the play because Mercutio is lecturing Romeo that the reason he is so anxious to go to the masquerade is because Queen Mab visited him in his dreams the prior night and to show Mercutio trying to help Romeo with his confusion towards his feeling of love for Rosaline.