Who really discovered America? Why is Columbus a bad man?

Who really discovered America? Why is Columbus a bad man?

Over the years, people have celebrated Christopher Columbus day, and taught their children about the brave hero who discovered America: Christopher Columbus. This is wrong. Christopher Columbus did not discover America; he was one of the last people to supposedly "discover" America. I believe that the people who truly discovered America were the Native Americans, led by Chief Howling Wind. These people are the group of early Asians who traveled across the land bridge, Beringia, to get to about Alaska, and then proceeded to fill in the rest of North and South America, and the surrounding islands.

I have more reasons why Chief Howling Wind and his people discovered America. There were six people who originally claimed to discover America besides Chief Howling WInd: Hoei Shin (a Chinese man), Brendan the Bold (an Irish Monk), Bjarni Herjulfsson (a Norse trader), Leif Ericsson (a Viking who got the map from Bjarni), Prince Madoc of Wales (self explanatory), and Christopher Columbus (a Spanish explorer). Even though all of the explorers (and Norse traders) had very different trips, every trip had one thing in common: they communicated with, they traded with, they saw; the Native Americans. This brings proof that the Natives were here first. And we know that the Natives came here from somewhere, because human beings weren't originally from the Americas, they were from Africa. This means, the second they saw America, they discovered it!

I know many people say that since people didn’t colonize America until Columbus came here, he discovered it. We must think though, that’s not entirely true. Technically, Asians came to America, and made homes, farms, gardens, and villages. So, they did make a bunch of “colonies” that could communicate, and trade. They had people living everywhere, and the tribes/groups/whatever-you-want-to-say communicated. That’s basically a dictator-less country. A group of people living in the same area, that all work together. All that’s missing from modern-day civilization is a central power. We’ve got to think about how the people had already made use of land. America was already filled with civilization when the Europeans got here, which means it had already been discovered.

My last reason is simple, short, and straight to the point: the Native Americans came to America before human beings even occupied Europe. It's true. America was found before Europe. This means, of course, Europeans didn't discover America, because they didn't even exist yet. I rest my case.

Now that we have that done, let’s discuss this. Christopher Columbus got to America in 1492, and he landed on an island. When he got out, he met a bunch of Natives (notice how he met the natives). Of course, I couldn’t get you any of the Native Americans that he communicated with, because he killed them all, blinded by lust for money. Also, I must remind you that out of all the people who also “discovered America”, so to speak, he was last.

I would also like to bring up the word “discover”. In order to discover something you need to be searching for something. Christopher Columbus got lost on his way to India, and found his way to an island off Central America. He didn’t even think he was going to find anything! I barely find that this coincidence counts as a “discovery”, especially, because five people found it before him, and a race of people already lived there.

All the Other "Discoverers"

Let’s talk about all the other discoverers for a bit. The first person besides the Natives to “discover” America was Hoei Shin. Hoei Shin was a Chinese man who had a long voyage around the Americas. His main course was along the western coastline, and they found Chinese anchors across his voyage. Also, they found some minor ship wreckage, so the trip was a hard one! Proof that this guy actually got to the Americas is also found on land. He traded with the Natives, because Chinese artifacts were found on land. Unfortunately for him, the Natives were already there, so he never “discovered” anything.

Next up: Brendan the Bold. Brendan was the second “discoverer”, or person to find America besides the Natives. Brendan was an Irish monk that sailed away on a boat made of animal skin. Brendan left Ireland in search of biblical paradise, and instead found America. Many people claim he may have discovered America, because he left a map that lead to North America if people followed it. Although, some people still believe it’s impossible for a man to travel to America from Ireland in an animal skin boat. Also, there have been no Irish artifacts found anywhere around America from the time that he supposedly found America. Bad news is, this was after Hoei Shin and the Natives got to America, so it didn't count for anything.

The next discoverer we’re going to talk about is the first Norse “discoverer”, Bjarni Herjulfsson. Bjarni was a Norse trader, that was blown off course from his original path. He sailed past America, and mapped that it was there. Since he obviously found the land mass, many people think that he discovered America. It’s argued, though, that he didn’t, because Bjarni never stepped foot on America, just sailed around it. Which I agree with.

Following Bjarni we have Leif Ericsson, the next Norse “discoverer”, and Viking. Basically, Lief took Bjarni’s boat, crew, maps, and everything else to go find this new place. When he found it, they created a colony on Newfoundland, which they named “Vinland”. This colony was short lived, but very much there. A lot of people claim that Leif didn’t discover America because the colony was short lived, and it was about three centuries (?) until the next person even cared about America. Though, since Leif Ericsson got everything he used to find America from somebody else, including a map, he didn't really discover anything.

After Leif Ericsson, we have royalty on our hands! Prince Madoc of Wales! Prince Madoc had left his country to avoid a family feud, and landed in America, settling in a village in Kentucky. He and his crew got along for years with the Natives, and even fell in love with some women, birthing a new race, Mandin Indians. Mandin Indians actually were light skinned, and mostly had red hair, and blue eyes. Unfortunately, after a disagreement, things got violent, and the Prince and his crew all ended up dead. The Mandin Indians eventually died out, getting rid of all evidence that the Welsh people were there, except a few Welsh artifacts. I would like to inform you that besides Christopher Columbus, this man was the last to find America. Not only that, but he didn't really discover it as much as he just seeked refugee there, so he didn't discover America after all. 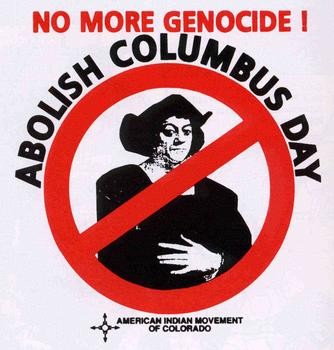