The Law of Nature Philosophy

Lockes conception of the natural law was that "no one ought to harm another in his life, health, liberty, or possessions". Jefferson utilized this important conception in the Declaration of Independence and modified it to read "all men.. [are entitled to]... life, liberty, and the pursuit of happiness”.

All Men Are Created Equal

In Lockes second treaty, he writes about equality: "A state also of equality, wherein all the power and jurisdiction is reciprocal, no one having more than another; there being nothing more evident, than that creatures of the same species and rank, promiscuously born to all the same advantages of nature, and the use of the same faculties, should also be equal one amongst another...", an idea that Jefferson follows with in the Declaration of Independence: "We hold these truths to be self-evident, that all men are created equal".

In the Second Treatise of Government Locke goes into detail in

describing humanity’s transition from the state of nature into civil

society: “When any number of men have so consented to make on

community or government,” said Locke, “they are thereby incorporated,

and make on body politic, wherein the majority have a right to act and

conclude the rest.” Jefferson reflected this in the Declaration of Independence: “That to

secure these [unalienable] rights, Governments are instituted among

Men, deriving their just powers from the consent of the governed,--That whenever any Form of Government becomes destructive of these ends, it is the Right of the People to alter or to abolish it”.

To Preserve These Rights

Locke discuses the method to preserve their "unalienable" rights: "and by men having authority from the community, for the execution of those rules, decides all the differences that may happen between any members of that society concerning any matter of right; and punishes those offences which any member hath committed against the society" , a method that Jefferson carried on into the Declaration of Independence: "That to secure these rights, governments are instituted among men, deriving their just powers from the consent of the governed..."

The Dissolution of the Government

In Lockes second treaty, he speaks of conditions that are suitable to overthrow the government: " When any one, or more, shall take upon them to make laws, whom the people have not appointed so to do, they make laws without authority, which the people are not therefore bound to obey; by which means they come again to be out of subjection, and may constitute to themselves a new legislative, as they think best, being in full liberty to resist the force of those, who without authority would impose any thing upon them." Jefferson piggybacks of this idea and writes in the constitution: "Whenever any Form of Government becomes destructive of these ends, it is the Right of the People to alter or to abolish it, and to institute new Government, laying its foundation on such principles and organizing its powers in such form, as to them shall seem most likely to effect their Safety and Happiness. "

I think the Law of Nature in which we are entitled to "life, liberty and the pursuit of happiness" is the most important of Locke's conceptions that Jefferson carried on to the Declaration of Independence. I think every American can agree that those rights are extremely valuable and that America would not be the same without them. 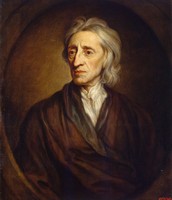 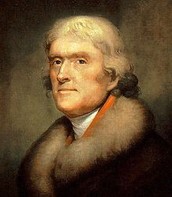