Get email updates from Vivian:

What attracted settlers to the Middle Colonies?

The thing that attracted settlers to the Middle Colonies was the farmland. In the text it states, “Settlers found that when this land was cleared, it was much better for farming than the land in New England.” This means that when the settlers moved to the Middle Colonies they thought that the farmland was better than anywhere also. That is what attracted settlers.

What was the colonial life in these colonies?

Colonial life in these colonies was very fun! In the text it states, “ In cities such as Philadelphia and New York City, people went to dances, plays, concerts, and social clubs. Horse races, sleigh rides, and ice-skating were also common,” This means that even in the colonial times people could still have fun. These were some things that people did in their colonial times.

Why did the Middle Colonies have the most industry? 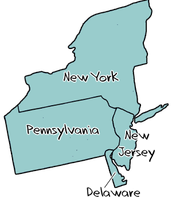